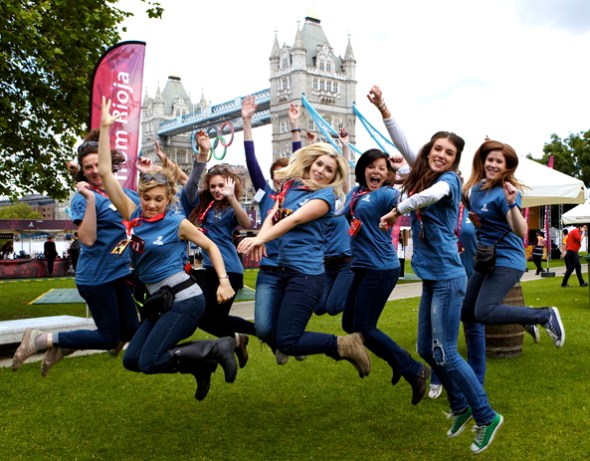 It is a very clever name, if you think about it. Tapas Fantasticas. Not Rioja Fantastica, or a mundane “Spanish Wine Festival” that would appeal only to the converts. The objective is to enthuse regular wine consumers who love drinking wine but don’t consider themselves wine experts, to explore the wines of Rioja. These people are looking for tasty experiences and treats – and “tapas culture” has come to be recognised for exactly that. So what could be more appealing than fantastic tapas and wine?

The fourth edition of Tapas Fantasticas took place on July 14-15 2012, in the heart of London and in the shadow of Tower Bridge and its new Olympic ‘bling’. As in previous years, Wines from Rioja created an outdoor wine, food and music experience that is the perfect way to bring a bit of Rioja to Londoners. There were 35 wineries pouring a range of their wines of all colours, 11 different Spanish restaurants showcasing their specialty ‘tapa’ or dish, and a band stand from where an eclectic mix of live modern and traditional Spanish music was performed.

To keep the energy high, there were celebrity wine walks with Olly Smith and Susy Atkins as well as cookery demonstrations and plenty of family acitivites. In this context, is it any surprise that consumers fall in love with Rioja wines?

The only fly-in-the-wine-glass, as it were, was the temperamental weather. What was surprising was the number of visitors who came to pay their £3.50 entry-fee for their glass and 4 sample tokens despite the rain that was forecast.

“We’re sick of being stuck at home. We decided to come and enjoy ourselves whatever the weather” … was a familiar message from the rain-jacket wearing, damp but always smiling crowds at each stall.

Maybe it was this sheer determination which finally broke the stranglehold of the Jet Stream and brought sunshine on day 2 for the Sunday visitors, and in the end almost 13,000 visitors were counted through the gates.

Tapas Fantasticas has always managed to attract a keen crowd of Londoners looking for a day out, Rioja and Spanish wine lovers and curious tourists passing by. What they all shared was a real interest in wine, the region, the logic of Rioja classifications, wine tourism and all the stories. There were no free wines, and there was mercifully little anti-social behaviour. Given the right context and opportunity, alcohol-based events do not have to descend into drunken parties, and instead we all experienced wine culture as it should be.

As each winery brought a range of its wines, the choices available were vast. In past years, where temperatures averaged well over 25oC, Tapas Fantasticas visitors had been excited to discover the many styles of Rioja Blanco and Rosado wines. Viura, Malvasia and now Tempranillo Blanco as well as a few international varieties, have a great deal to offer white wine lovers.

However, this year’s cooler climate meant the better known red Crianza, Reserva and even Gran Reserva wines were most in demand, and some stalls found themselves out of red wines well before closing.

“as always Tapas Fantasticas was a great day out and one which is most useful to promote the Spanish culture, food and wine amongst good quality consumers.

The highlights the attendance even thoough the weather was pretty damp, the quality of the music and the general vibe. 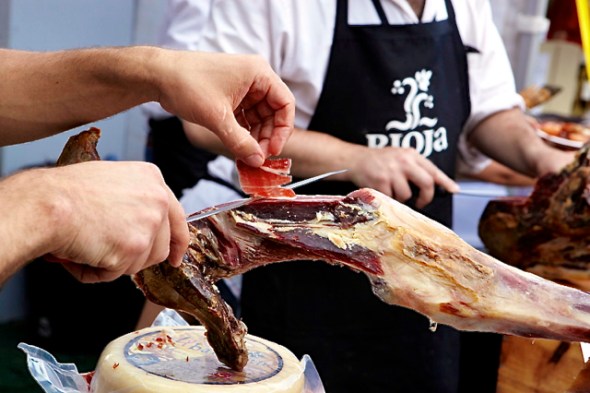 My food and wine pairing had to go to the Altos de la Guardia Rioja Blanco 2011 paired with Iberica’s Arroz negro, or black ink rice – a classic blend of viura and malvasia, with some oak fermentation, a slightly modern in style wine freshers and slight mineral the minerality of the wine coped well with the fattines and saltiness of the black rice, whilst the structure and reachness of the oak managed the ali oli served with it.

… oh and the churros stand was so busy and popular that they could have done with another one.”

“We had chorizo & goats cheese ciabatta type sandwich and some jamon and cheese croquettas which went well with a barrel aged viura we found….“

What was particularly exciting about this year’s marketing activity around Tapas Fantasticas was that Wines from Rioja invited Snooth.com to be a media partner and interview the wineries at the show. These interviews were broadcast live to an international audience and will also be archived for others to watch again. With Snooth’s strong base in the USA it might be that an event similar to Tapas Fantasticas could be coming to a US City near you soon, organised by the ambitious and exciting Vibrant Rioja campaign in the USA.

Time will tell, but the campaign to promote Rioja, Spain and the excitement of wine culture has hopefully made an impression that will encourage more consumers to choose Rioja. Let’s hope more countries and regions take note.

London based wine blogger, Robert worked in the UK wine trade for importers as well as representing wineries. Better known by his online moniker, thirstforwine, Robert is also the co-founder of the DWCC - Digital Wine Communications Conference and one of the Vrazon team.