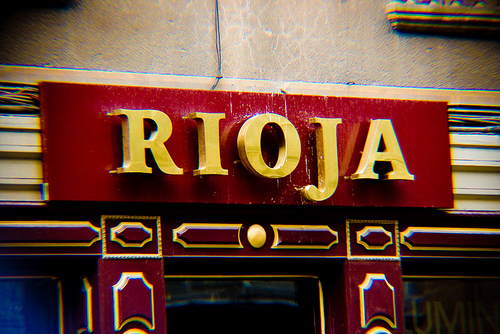 Editor’s Note: Tom Perry is a long-time friend of Catavino’s, not to mention a very knowledgable man. Previously the Director of the Rioja Wine Exporters’ Association, he is currently self-employed as a strategic and tactical marketing consultant for the Spanish wine trade, as a wine educator and speaker on the national and international wine lecture circuit, and importantly he is also a blogger penning his site, Inside Rioja. We are very appreciative of his time sharing with us his perception of the current state of Rioja wine.

Whenever I ask an export director from Rioja how things are going, the answer is always “luchando” (struggling). I empathize with this response because trading under the effects of the world economic crisis is a challenge for Rioja wineries, a fact that isn’t evident from the rosy picture painted by the recent official press release from the Rioja Regulatory Council about global results for 2012. Spanish speakers can click here to find the release.

Here is a summary in English: (Figures in million liters)

These official statistics indeed show Rioja successfully fighting off the effects of the crisis with sales in the Spanish market (64% of total sales) only down 4,26% while international sales (36%) grew by 5,47%.

If, however, you dig a little deeper, several facts stand out that are a source of concern.

1)   The region may have more or less maintained sales volumes, but ex-cellars prices have been dropping since 2008. This is understandable given pressure from distributors to drive sales in markets with weakened demand but obviously has had an impact on company profits and makes the wineries more hard-nosed when negotiating grape prices, which went down from 2008 to 2011. The price of grapes increased slightly in 2012 however, due to a small harvest.

2)  High concentration of total sales in Spain and the UK. Wineries haven’t given up on the Spanish market, but the general feeling is that it’s not worth it to further cut prices to drive sales. Most of the companies I’ve talked to offer discounted prices to Spanish distributors several times a year, but would rather sell a little less to protect profits. Hardest hit is the on-trade in Spain, and consequently, wineries have had to devote a larger percentage of sales to the highly price sensitive off-trade.

The UK accounts for one third of international sales of Rioja and 12% of worldwide sales. A worrying trend is that 40% of international sales of reservas are shipped to the UK at low prices to meet demanding price points UK supermarkets. In fact, shipments of reserva to the UK double those of crianzas, squeezing the popular crianza category against young Riojas, which often means that to create a significant price difference between young Riojas and crianzas, prices of young wines are reduced.

Rioja wineries would be wise to pay attention to a recent study from the International Wine & Spirit Record that predicts that wine sales will continue to fall over the next five years, with consumers trading up. There is certainly room in the UK market for higher priced Riojas and putting more emphasis on these wines would help Rioja’s image. A recent article in The Drinks Business was critical of Rioja for being Spain’s best known region but not known for ‘fine’ wines.

3)  The strong euro, or more precisely, a weak dollar, pound, and renmimbi as countries seek to become more competitive exporters. Unfortunately, the USA, UK and China are key international markets for Rioja, so a strong euro puts future sales at risk.

4)   Internal tension between wineries and growers. Emilio Barco, an economics professor at the University of La Rioja and a longtime student of trends in Rioja states in his doctoral dissertation that Rioja is at a crossroads in its development due to disagreement between wineries and growers about grape prices and the possible elimination of planting rights by the European Community. The Rioja Interprofessional Committee is due to elect a new executive board and president in March. It’s the growers’ turn to appoint a president and the wineries have agreed to support their candidate. Behind the scenes, however, there’s bound to be reticence because the wineries aren’t sure about the new president’s agenda. This already happened in the past.  If there’s a new impasse, perhaps the best solution would be not to elect a president and let the current Council secretary to publicly represent the institution as well as run it from day-to-day.

Meanwhile, the coop association threatens not to participate in the future committee because their share of votes has decreased. In the past, these internal battles rarely were heard outside Rioja, but with the advent of internet, the world hears about them, to the detriment of the image of the region.

On a positive note, the Council has agreed to invest 8 million euros in an ambitious PR budget for 2013, a 5,6% increase over 2012.  This is encouraging given tight profits for both wineries and growers.

If you forget about internal politics there are many reasons to support Rioja’s being on the roll of its life.

In addition to Rioja’s traditional blends and wines made from single varietals, an emerging trend is an increased focus on wines from specific villages and terroirs.

I sincerely believe that Rioja is producing the best wines in its history.  However, the region ought to pay more attention to improving quality at the lower end of the market and managing political affairs more responsibly through the Council and the Interprofessional Committee.