Aranda de Duero is a town located approximately 2 hours from everything. When I was visiting Aranda this past week, my friendly guide summed it up simply by stating, “Aranda de Duero is two hours from Madrid, just over two hours from Santander, two hours from Rioja and two hours from Portugal”. While this may be a bit of an exaggeration, it’s true that this city, located in the heart of the DO Ribera del Duero, is an important landmark for both the locals of the inky regional wines, as well as people traveling through Spain from the north the south and east to the west. So much so, that it has attracted big business with companies such as Michelin and Glaxo Smith Kline along with the behemoth Spanish dairy producer Leche Pascual. Because of this recent migration of business and money, Aranada is a prosperous and growing city. Not to mention one of the great Spanish wine regions, but we’ll get to that later!

The first records of Aranda de Duero date back to the tenth century – though it’s a given that man had inhabited this area well before this time. It was in this century that this little town began to take shape by building its prerequisite castle wall and cathedral – basic essentials for any medieval town on the Iberian Peninsula. It was also during this time when the locals built a vast underground network of wine cellars where wine was not only stored, but protected from the harsh extremes of weather prevalent in this area.

Additionally, Aranda, and throughout the Ribera del Duero, underground caves were also used to produce wine.

Most caves are located at a depth of fourteen meters where a layer of sandstone allowed for the easy construction of hollowed out passageways and caverns.

The production of the wine in these deep vacuous caverns centuries ago is relatively mind-boggling. Grapes would be pressed in large lagers near the surface, while the juice would be carried by gravity down into fermentation vessels below. Here the wine was elaborated until it was loaded into pig skins

that were hauled back up to the top by, I imagine, some burly men. Although the caves do not come fully equipped with lagers, pigskins and strapping men today, 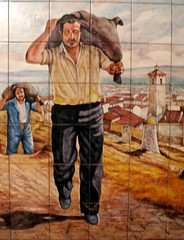 they are still used for storing wine and having fiestas with some great ambiance. In fact, most of the caves are owned by private individuals or groups called Peñas. Unfortunately, this also means that the caves are closed to the majority of people, such as you and I. Without an invitation, your best chance to see them is through pictures or glimpses down long dark staircases accessible from the street.

In Aranda, you can spot these same entrances marked by the small doors set into buildings and along the winding streets. On the other hand, if you take a quick drive out into the country, you will see little “hobbit” doors along the sides of hills. 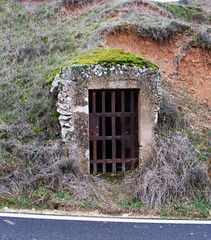 Most often closed with big steel gates, these entrances are often tucked into the side of a grassy knoll with green vegetation sneaking its way along the sides and front of the doors. It’s here in the summers that you will find families grilling near the entrances, while sneaking down into the caves every now in again to cool off from the intense heat, or to just grab a bottle or two of wine from their hidden stash within.

I mention all of this for two reasons: first, I love the idea of hidden tunnels with wine buried deep inside vast caverns. I mean, who wouldn’t? Second, I wanted to give you a little secret to experiencing these tunnels for yourself. It turns out that there is a winery and restaurant called Lagar de Isilla, where you can descent deep into the wine cellars yourself.

Stay tuned and I will not only expand a bit on this restaurant, but I will also share a bit about this historic bodega in Aranda de Duero and the wines that they make.