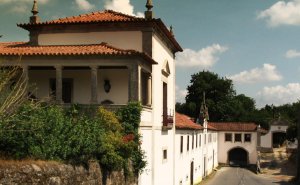 I love home cooked meals, especially when I’m in a foreign culture, enjoying their traditional cuisine. I love the anticipation as exotic aromas float in the air, the great conversations that lead up to the first bite and the fervent energy that zips throughout the room as glances are stolen into the kitchen wondering how much time is left before the oven timer goes “ding”.

On this particular night, our friend Beatriz cooked up a feast for six in her Lisbon apartment overlooking the Vasco de Gama bridge. Moses and Eddie from Algarve Buzz, myself and Ryan, Andre Ribeirinho from Adegga and his girlfriend, Beatriz, scheduled a “get to know you” dinner during our quick 2 day tour in Lisbon a few weeks ago; sadly however, we only got a few hours with the two man grew from the Algarve Buzz, as they needed to make their long journey back to Faro in the southern tip of Portugal. So although they couldn’t join us for the meal, we did make the most of our time by tasting three new wines, while aromas of mushroom risotto and red wine drunken pears wafted into the dining room. As I’m sure you can relate, on an empty stomach, there is nothing more dangerous than tasting wines in such delicious conditions 😉

The Casa and Quinta de Paços most likely owes its name to an ancient court (or vilae), at a time when the parish of Rio Côvo (Santa Eulália) was a roman thermal resort. What exactly is a roman thermal resort, not sure, but it sounds a bit kinky. With 400 years of grape growing under their belt, this family owned winery, located in the heart of the northern regional wine designation, VR Minho, owns 200 hectares under vine distributed between two provinces, Barcelos and Monção. In Barcelos, grapes are sourced from three distinct vineyards: Quinta de Paços, Quinta da Cotovia and Quinta de Vila Meã, and taken to the winery, Rio Covo StÃ‚Âª Eulália, come harvest. While in Monção, the grapes are only sourced from two vineyards, Casa do Capitão-mor and Quinta da Boavista, and carried to their second winery called, Mazeda, for processing. For centuries, the family’s mission has been to produce high quality wines that reflect the terrior without excessive processing or harmful chemicals or pesticides. Alice Feiring would be proud.

The Planalto label falls under the massive Sogrape umbrella. Planalto, meaning “plateau” in Portuguese, originates from their Vila Real winery located on a high altitude plateau in the Douro, protected from the Atlantic winds by the Serra do Marão mountains. Made from the traditional Minho white varieties such as Malvasia Fina, Viosinho, Gouveio and Códega, the grapes were hand-picked, softly crushed and fermented separately by variety, or plot, in controlled stainless steel vats at 16Ã‚Âº-18Ã‚ÂºC for approximately 20 days. Finally, the wines were blended, clarified and then stabilized before bottling.

To be honest, all three wines are worth trying, but one in particular caught our attention, the 2004 Casa de Paços Arinto Reserva. At first, the six of us were convinced the wine was flawed as a result of it’s peculiar honeycomb, lychee and saffron aromas, but over time, the intensity of these contrasting aromas merged into an attractive, albeit slightly oxidized, bouquet. Granted, this wine was odd, but with its round, lush mouthfeel, medium acidity and long, honey and pear finish, this is most definitely a wine to experience.

Neither of the Casa de Paços wines are readily available outside of Portugal, but they are currently looking for importers in Germany, Poland, Holland and France. Scroll down for our full tasting notes.

We also would would like to thank Beatriz for taking the time to translate and send both recipes she whipped up for us that night. They were delicious and look forward to many more of her creations in the future!

Put the dried porcini mushrooms in hot water for 30 minutes. Then cut the fresh mushrooms and dried mushrooms, and put them in a frying-pan with olive oil, garlic cloves, salt, pepper, and basil. In a separate pan, add olive oil, spices and onion. Add the dried tomatoes, and after a few minutes, add the risotto. Mix everything together.
Add hot water to the risotto and mix well. When the water cooks into the risotto, add a little more water. Continue this cycle until the risotto is cooked. Finally, add the butter, Parmesan, vermouth, lemon juice and the mushrooms.

In a low pan (where the pears fit), add water and sugar over a low/med flame. When the sugar is dissolved, add the wine, the cinnamon stick and the lemon peel. Put the pears in the pan and turn them from time to time. Approximately 45 min later, the pears should be cooked.