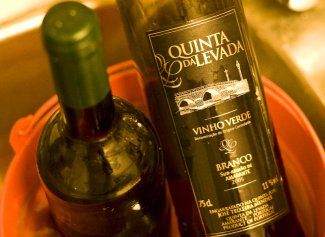 It was chilly last night, really chilly. As the sun set upon Terrassa, and the yellow hues faded to a reddish glow that cascaded upon our livingroom floor as if someone spilled a bucket of crimson paint, Ryan and I looked at each other internally agreeing with a roll of our eyes that the last thing we wanted to do on a Friday night was to research yet another Portuguese Quinta. The involved steps of collecting their information, reading up on their history and finally picking apart each and every nuance of their series of labels and styles can feel as exciting and tantalizing as watching paint dry.

Looking at the wines on the floor like little glass soldiers preparing for battle, we sighed with slight contempt. Do we choose one producer? We could, but we didn’t have a producer that gave us two whites, and not being in the mood for a red and white, this wouldn’t work. Do we choose one white grape varietal? This was also a possibility, but of the few white monovarietals we had sitting on our floor, none of them were compatible with a low key Friday night hoedown. So in the end, we decided on 3 white blends from 3 different producers in the Vinho Verde region with “branco”, white, listed on the front of the label.

That settled, we came across our second obstacle. Wanting to nibble on our randomly thrown together platter of Tapas, but not wanting to eat before we tasted the wine, we pulled a MacGyver. Taking a little orange metal bucket from the living room into the kitchen, we opened the freezer only to find one remaining plastic blue ice tray remaining. Clang. Click. Clank. We dropped the ice into the bottom of the metal, gently positioned the three wines on the ice, and filled the remainder of the bucket with lukewarm tap water.

Ten minutes later, we reconvened in the kitchen, wrapping our hands around the wet tepid bottle and sighed. Getting desperate and hungry, we took an oyster knife from the drawer and began chipping off large sheets of ice from the bottom of the freezer drawer. Still not convinced we would be tasting the wine in the next thirty minutes, we went ahead and shoved in two ice packs and some plastic ice cubes as well. The image was beyond tacky, but in all honesty, we didn’t care. Memories take on a life of their own when you allow the moment to move you, and from this point forward, we will never forget these three wines, forever associating them to that hot steamy Friday night when all we had to chill a few bottles of Portuguese white wine was an oyster knife, a cheap metal bucket, freezer burn and a couple of ice packs. 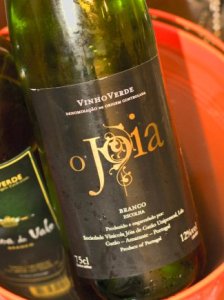 The first wine was absolutely amazing! Pouring it into the glass, the effervescent foam bubbled so profusely that it was more reminiscent of a Cava than a Vinho Verde. The beautiful lime green color sparkled and twinkled in the light, showing really bizarre yet tantalizing aromas of dried grass, vitamin c in a plastic container and lemon zest. The acid was bright and crisp, allowing intense flavors of apricot, steel minerals and beeswax to make a brief but memorable performance before disappearing again. The wine was fun, interesting and alive!

Picking up the second bottle from the ice bucket, watching the diminished sheets of ice float vulnerably on their sides, we noticed both the shipping code and the recycling sign on the front, not the back label. Cocking our heads a bit the side, we both wondered why the producer would ever want to have these two signs in plain view of the customer. Not only are they an eye soar, but it takes away from you focusing on the name of the wine, rather than its serial number. But obviously, the producer didn’t care if it took away from the wine’s name, because the font was completely illegible and neither Ryan nor I could decipher it. Written in a paintbrush like font, making some letters look as if their dripping and fat, as others look anorexic and scrawny, the only way we could actually figure the name was by doing a Google search.

Note to producers: if it takes me five minutes to sort out the name and vintage of your wine, there’s a high likelihood that I’m never going to search for this wine again no matter how amazing it is.

And this particular case, not even the wine could save it. Although the bouquet of the Coroa do Vale Branco had a rich pasture aroma with hints of kefir yogurt, violet, potpourri, clover fields and chamomile, the finish was quick and empty, leaving an unpleasant sour sensation in the back of my mouth. Medium to low acidity with little backbone, the wine just left me feeling a bit vacuous. To be honest, I think we were both excited by earthy bouquet, hoping beyond hope that the label was merely a bad design and wouldn’t foreshadow a poor wine, but unfortunately, it did.

Pulling out the last and final bottle, O Joia Branco Escolha was comparable in effervescence as the Quinta da Levada Branco, but the wine showed tropical rather than mineral notes. Strong pineapple stalk followed by gently toasted almond, peapod, and menthol aromas. Excited, hoping beyond hope that the palate would match the bouquet, we took a sip. Crash! The rug just pulled out from underneath us because although we could pick up a bid of red apple and butterscotch, the chemical, acrid aftertaste was so distinct and overwhelming. Consequently, the remainder of the wine was dumped down the drain. 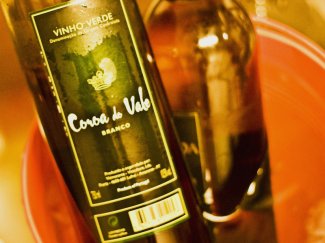 What can we decipher from this? Maybe nothing, other than bad luck. On the other hand, there was a commonality that quite possibly could be factor – the cork. The Quinta da Levada Branco was the only one of the three bottles closed with a natural cork stopper. Meaning that it is was one piece of 100% natural cork. Whereas, the other two appeared to have been agglomerated cork stoppers, which are stoppers made from granulated cork adhered by a food safe adhesive. Could this have been the issue? We honestly don’t know, but we thought the coincidence was worth pointing out.

Here’s the clincher. The one wine we highly suggest for you, 2005 Quinta da Levada Branco, has very little information about the wine or the winery on neither the bottle nor on the Internet. I can’t even find a phone number so that I can call the producer! I did, however, contact the Vinho Verde Regional office in hopes of providing you a price point and availability. Hopefully we’ll hear back in the near future so that I can pass on the information for you.

In the meantime, share with us your favorite Friday night impromptu wine tasting stories!