An Aussie’s Take on Rioja Wine 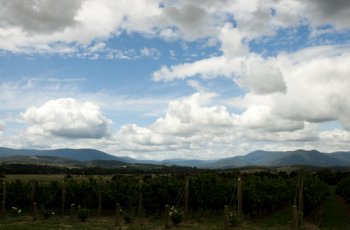 Editor’s Note: As we have been exploring Rioja throughout the month, we realized that this legendary region has not only infused itself throughout Spain, but throughout the world as a whole. From east to west, and north to south, people around the world have been boasting about the classic wines of Rioja…or have they? Our friend Dave Worthington has accepted our challenge to bring you his experience of Rioja from down under.

I had some friends out from the UK at Christmas and served them up a wine from Rioja one night with dinner. The look on their faces was like I’d just run over their cat. What they knew as Rioja was this cheap, daggy wine from the supermarket back home that costs 5 pounds. Here in Australia, we’ve been fairly lucky with Rioja, as we don’t have that history. In fact, only the more adventurous wine geek had ever heard of it ten years ago. You see, we’re a long, slow boat ride from Spain, imported wines are highly taxed and we have a booming local wine industry that serves up the local equivalent of the 5 quid (or US $10) bottle very nicely. So, the little Rioja wine we saw before about 2000 was not exactly inspiring and had more than likely been sitting in the corner of some hot bottleshop for 10 years, completely buggared by the heat by the time you bought it. The owner having a quiet chuckle when a punter buys a bottle. Of course, the Spanish immigrants always had some good stuff stashed away, but you had to know where to look and know the secret handshake to get in the door.

Thankfully, that’s changed for the better. Cool little bars have popped up in every back alley in Melbourne, and Spanish food is hot. The punters are now looking for something a bit new and different to drink. Wine and sherry from Spain have slipped in very nicely to fill that craving and has become one of the must haves on a restaurant or bar wine list. We have a number of very passionate importers to thanks for introducing the better Rioja wines, as well as the renewal of wine making and viticulture in Spain over the past 30 years. You see, its the modern wines that are getting people interested. No, not those blockbuster international style things, but what I call the updated wines. Winemaking that has kept the tradition and terrior in place, but shows what you can do with great fruit and careful use of modern methods.

Take Bodegas Roda for an example. It was panned by some critics as being an abomination when it first came on the world scene in the mid 90s, modern crap lacking a sense of terrior they said. Sure the heavy handed use of French oak was a bit much in the first couple of vintages, but as with all ambitious new ventures, a bit of tweaking over the first couple of years was required to get it just right. While you won’t find that traditional strawberry and vanilla style Rioja here, is that really terrior? To me, years in American oak is not terrior, its all about the fruit. Drink a bottle of Roda Reserva and you’ll find a lot of classic Rioja character, like herby, brambly undergrowth, that you won’t find anywhere else in Spain.

Roda Reserva and Roda I must be one of the most popular Rioja wines in Australia. You’ll see blokes in suits boasting about their new German sports car while scoffing down Roda at top end restaurants, its in the cellars’ of the die hard “I only drink Aussie wine” collectors and at your mate’s place when you go round for dinner on a Saturday night. Sales of Roda have gone from something like 12 cases in 2001 to 170 last year. Not bad for a wine and a region that was known to only a knowledgeable few seven years ago. Of course its not all modern gear that gets people excited, a few familiar old names such as Marques de Riscal and Bodegas Muga have made it out as well and are very popular.

You don’t have to spend big dollars to into some quality Rioja. The $20 bottle seems to be the entry ticket for a look something reasonable and there are quite a few options here. While I don’t think that most estates in Rioja make a great joven style wine, Telmo Rodriguez has always done a good job with LZ. For something with wood you can pick up Conde de Valdemar Crianza , Comse Palacio y Hermanos media-Crianza or something from Sierra Cantabria for around 20 bucks. These are the wines that are putting Rioja in people’s glasses and on tables, be that in a restaurant or at home. Now when people go to a restaurant and ask for something a bit different, they are just about always given a bottle of Spanish wine, with Rioja at the top of the list.

Thanks Dave for giving us your take on Rioja in Australia. And please, take a moment to check out Dave’s blog, Tinto y Blanco, dedicated to Spanish wine!