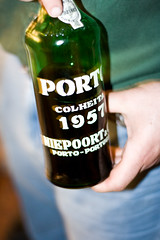 “Do you want to try something else really good?” Dirk Niepoort says to me just after pouring a 1977 Garrafeira Port into my wine stained glass. Of course, there is only one answer to such a question, and with port still sitting in my mouth as I restrained from swallowing what is perhaps one of my new favorite wines, I nodded vigorously and followed him out onto the terrace of our restaurant to a beat up old cardboard box holding half empty bottles with corks sticking out their tops. Haphazardly grabbing a 1957 Colheita out from the depths of the box, I watch intently as he tipped the bottle into my glass as waves of eager anticipation crept into my belly. Savoring the sensation as the wine touched my lips, I was in love. This was the end of what turned out to be one of the better wine experiences I can remember and a recurring theme when hanging out with the infamous Douro Boys!

On this particular evening of our trip to Oporto, we were originally supposed to taste all of Douro Boy wines at small restaurant; but here in Portugal, a schedule is a mere suggestion and adaptation is not so much a conscious choice as a crucial part of any evenings on the fly coordination. Consequently, we ended up at a small and intimate cafe that serviced the Modern Art Museum’s Botanical Garden, and whose sign at the counter stated, “It is prohibited to sell or consume alcoholic beverages in this area”, a warning that held very little meaning with so many fine ports sitting next to it! With barely an intro or a welcome, the small group of journalists that we were, from all reaches of the globe, began the evening with random wines poured into our glasses as small appetizers circulated the room. It was a good start, and with a little patience, our tight quarters were made ever tighter as each of the Douro boys slowly rolled into the cafe with boxes of bottles and magnums under each arm. Each new entrant, a wine rock star in there own right, added a new level of intensity to the overall atmosphere.

With Gabriella sitting across from me, it was our great fortune to share our table of five with Dirk van Niepoort, maker of some of the Douro’s finest Port wines. However, his fame has now expanded to encompass table wines as well, including such labels as the Redoma Blanco Reserva, showing immense acidity and complex minerality on both the nose and palate. For me, this was a dream experience to be able to share the evening with one of the true legends of today’s wine world. For the better part of an hour, our table chatted with Dirk about his philosophy on winemaking, wine drinking, and the current state of wine styles around the Douro and beyond. 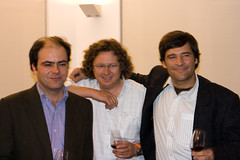 His Batuta 2004 and 2005 were exemplified as wines with incredible acidity, as a result of his early harvest techniques when the grapes are still a touch green. This style of winemaking is a technique that modern wine makers shun, while Dirk holds it as a vital means to ensuring a wine’s long life and balanced acidity. “Acidity is the most important thing for life, except maybe in Port wines.” He mentioned how the 2004 was not his favorite, but was currently showing quite well, while the 05 was rather dull in comparison. Yet, he assured us that it would eventually open and be judged as the better bottle. “If you only had one bottle of this the 05 left”, I asked with curiosity, “when would you open it?” With a glint in his eye, he responded, “in 15 years, though that may be too early.”

Not to leave out the rest of the group, but the majority of our time was spent with Dirk and his winemaker, Luis Seabra. Apart from their wines, we tasted the VZ 2006 by Christian van Zellar and winemaker, Sandra Travares da Silva, a white wine made from a field blend of grapes at an altitude of 400m. Christiano is currently buying the grapes from a few independent producers, but with the look of an expectant father, he spoke of a deal or two he is waiting to hear back on in hopes of owning the vines himself. If you have a chance to taste this wine, still in its first vintage, and experience the full mouthfeel with its racy acidity that makes it an excellent pairing for richer foods that demand a white, you won’t be disappointed. The Vallado white 2007 is also worth mentioning with its delicate pear essence that pleasantly lingered in my mouth long after I swallowed.

The night quickly became a flood of wines, as winemaker after winemaker came from table to table pouring bottle after bottle. Falling out of people’s lips were, “You have to taste this”, “This is something different!”, and “This is incredible!” Obviously, we did not complain. Quinta Vale do Maria 2001 from a double magnum is a beast of wine with tertiary flavors just beginning to make their appearance. Quinta do Crasto‘s 2005 Touriga Nacional shows the purest violet notes I’ve tasted in quite some time, while the Redoma from Niepoort, showed rich Douro fruits that were succulent and laced with minerals begging for our attention. Scanning my notes, I begin to see where the conversation became more important than the analysis, as wines began to receive one word descriptions such as “wow” and “amazing”. 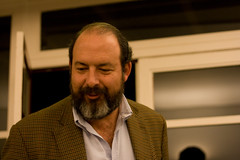 The evening ended before I was ready to go, as I was discussing with Jose Penin and Luis Seabra about the hypothetical situation of tasting a Garrafeira wine from the same vintage against a regular vintage port from the same vintage to see how they both evolved in their vastly different containers. For those that don’t know, a Garrafeira is a style of port that is practiced by only a few wineries: Niepoort winery being the most well known. Single year ports are aged for decades, not in wood, but in special shaped small glass containers called, “demijons” (7 to 11 liter glass balloons in the form of old apothecaries bottles). The 1977 mentioned earlier, gave off a light purple hue with pure fruit and a racy acidity that cut straight down the middle. This was a wine that I dreamed of enjoying over the course of several evening, savoring its rich fruit flavors.

Overall, there were wines I logically enjoyed more than others, and wines that I felt disappointed to have missed. Some wines even arrived during courses, and the middle of conversations, a pity, but one I won’t regret. Wine is meant for drinking with friends and over conversation; and the level of discussion we experienced this particular evening was one that I thoroughly appreciated. If you ever have the chance to drink some wine with the Douro Boys, I highly suggest that you arrive on time.