And we’re back to our Regularly scheduled program! 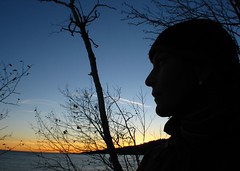 So the holidays are finally over Gabriella is back in Spain and I am still in Minnesota! And as a result of my having three more weeks before returning to the extremely warm temperature of Barcelona, I’ve been taking full advantage of both my friends and my wines from my old cellar – a fantastic combination! It’s been fun to catch up and see how both people and scenery have changed from what I remembered. One thing, however, has stayed the same – the wine is incredible.

This past Sunday, Gabriella was due to fly to Spain around 3pm, while I was off to meet some old friends for a wine tasting. Leaving the airport sad that she wouldn’t be joining us, I decided to kill some time shopping for little odds and ends that we can’t easily get in Europe before the tasting. Just as I was at the checkout, lo and behold, Gabriella’s name scrolled across my cellphone display. Assuming that she wanted to get in one last goodbye before hopping on the plane, she instead told me that she was shifted to a later flight in exchange for a $750 voucher good for anywhere in the world. Great! But the extra bonus wasn’t so much that she was on a later flight, but that it was six hours later providing us ample time to get to the tasting. Put into perspective, my wife was paid $750 by the airlines to not only drink some killer wines with old friends – one of whom is a chef, but also arrive in Barcelona not an hour after her originally scheduled time. Yeah, she’s got some luck flowing through her. Hence, we made a bee line over to our friend’s house and drank a handful of Ribera del Duero wines paired with roasted leg of lamb, potatoes, squash and roasted mushrooms. By the time I got her back to the airport, saying goodbye was a bit easier knowing that we were both well satiated and content!

So this is how two weeks of holidays and visiting friends ended. We tasted wines with various groups, ate foods that ranged from tenderloin to short ribs and lamb to salmon. Plus, we’ve traveled from the shore of Lake Michigan in Chicago to the North Shore of Lake Superior in Minnesota. How is that for covering all the bases!

Now, what’s on deck for Catavino in 2007? Great question! We’ve been spending a considerable time trying to figure that out. We can guarantee more trips to places such as Alicante and its surrounding regions of Jumilla, Yecla and Murcia. Rioja sounds like it may get a revisit. Portugal, is extremely high on the list and one that we will put our full attention towards. We absolutely love Portugal, and have tasted so many great wines from there that a visit if only for a week is expected.

Also, if your in the Twin Cities area, I would like to extend an invitation for you to join me at my old store as I open and chat about Spanish wine. I recently met the new owner, who is a great guy, and I offered my services to both talk about Iberian wine as well as catch up with old customers. So if your interested, here’s a link to the location. It will be from 3-6pm on Friday. Hope to see some of you there.

PS, this weekend I’ll be answering some questions over at Winecast.net about Iberian wines. Feel free to send in a question!