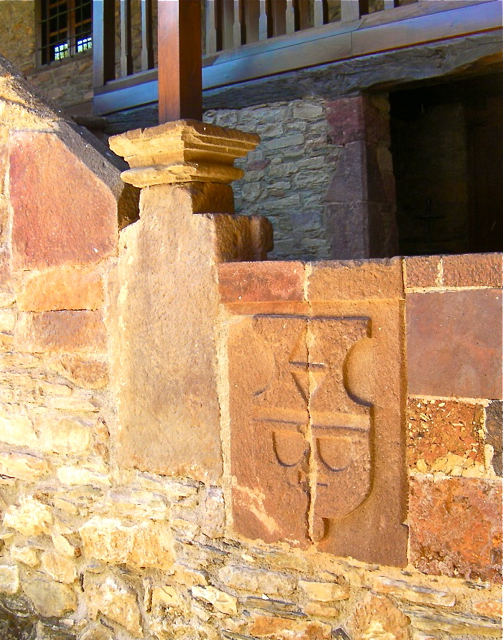 Unless you wanted to buy a second-hand Land Rover Santana, there’s no reason you’d find yourself in the Galician town of O Barco, indeed I can’t say I’d ever recommend you to go there. Although surrounded by beautiful hills and on the banks of the equally picturesque Rio Sil, the town is a run-down concrete blob, which seems to have a permanent patina of dust. It is, as an estate agent might describe it, ‘functional’.

But if you ever are in O Barco, might I suggest that you take a small road up a hillside and follow the signs to the Monasterio de Xagoaza. It is worth it. Not only is its 13th century chapel a wonder to be behold (if you can ever find anyone to let you in), the monastery itself is an impressive edifice.

But it’s not just for the history buffs. O Barco is in Valdeorras country and Xagoaza is the place where, almost single-handedly, one man revived the autochthonous Godello grape. Horacio Fernandez Presa founded the Godeval winery (under the monastery roof) in 1986. Here, they make Godello (in partnership with Jorge Ordonez another Godello and Mencia, both under the Avanthia label are also made in the monastery) and it’s pretty darned good too, especially accompanied by the local Pulpo and potatoes (from what I can tell, you take sliced pulpo, cook in copper, add some boiled, chopped potatoes, drench in olive oil – literally, drench – and sprinkle paprika on top).

The vineyards of Godeval are as impressive as the location of the winery, leaning on the edge of the hills that drop down to the Sil valley, they are almost vertiginous, and planted on the slate soils that were the source of Valdeorras’ primary industry, until wine took over.

And if you ever do find yourself in O Barco, at least you can swing by bar 13/14 (actually a cerveceria, and despite the dark interior better than Vinum up the road) for a Tapas and a glass of Godello – or Gran Tortuga if you want something a little more salty and authentic (neither appear to have websites).

Bodegas Godeval, Godello, Valdeorras, 2009: Pineapple, white fruit on the nose. In the mouth this is relatively rich, feeling quite big-bodied and broad (this seems to be a trait of Godello) but with a very nice, bright, fresh finish. Although this wine seems to lack a bit of depth and complexity (mainly on the finish/back palate) it is still a very nice wine and, as I said, a perfect dinner table friend for Pulpo.

NB: Godeval is building a new winemaking facility outside the monastery that should be operational this year. If you want to see the fermentation tanks in situ you might have to make a detour to O Barco soon!