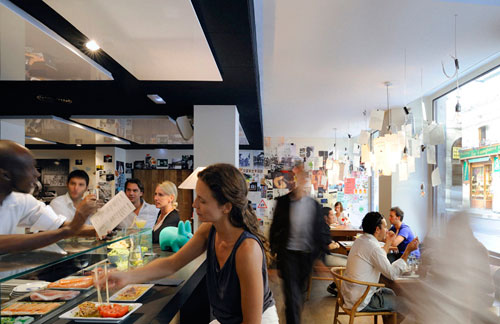 Although Catavino primarily focuses on traditional Spanish cuisine, there is something to be said for featuring new and “hip” restaurants that grace our gritty and romantic city streets of Barcelona. And what better cuisine to focus on than a fusion of my two favorites: Peruvian and Japanese.

For those of you who aren’t familiar with my history with Sushi restaurants, allow me to give you a short primer: I’m absolutely addicted. The addiction runs so deep, that if I even pass a sushi restaurant on the street, my stomach churns in desire, my palms sweat in anticipation and I find myself jumping up and down like a 4 year old eager to open her first present on Christmas day – and with any luck, it’s in the form of perfectly cut yellowtail. One could say that my DNA has been restructured after 8 years of serving this delectable cuisine throughout my graduate studies, but I would prefer to chalk it up to simple, fresh ingredients that when done well, absolutely melt in your mouth. But when done poorly, it’s hand’s down the worst experience ever.

Strangely enough, despite Spain being one of the fish meccas of southern Europe, I’ve had more nightmarish Japanese experiences here than anywhere else in the world. From under fried tempura that leaves a thick greasy film over your palate to paper thin old fish covering starchy, flavorless rice. Much akin to Russian Roulette, I’m conscious that over 80% of my experiences will end in heavy hearted disappointement, but as my desire runs deep, I’m perpetually eager to take yet another risk.

However, in this particular case, I’m glad I did!

Nikkei cuisine is a fusion of Peruvian and Japanese, created when the Japanese immigrants landed in Peru after the trade ban was lifted and were at a loss to encounter their traditional ingredients. Hence, they did what many of us expats have done in every country around the world, they innovated. 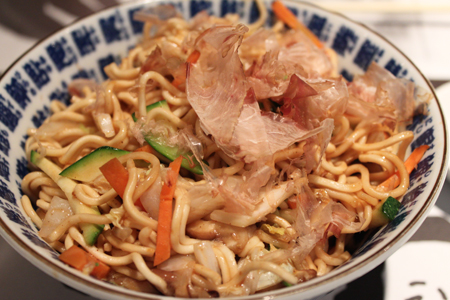 Komomoto is one of a dozen Spanish restaurants that fall under the Grupo Tragaluz banner, a family business run by mother and son duo, Rosa Maria Esteva and Tomas Tarruella. Much in the style of Wagamama, with its monochromatic, sleek design with broad benches and shared canteen tables; but with the added flare of artistic wall designs with black and white photos of naked women and crayon drawings of abstract faces. Seasoned with slightly arrogant, yet efficient waitstaff, the restaurant screams corporate despite informal eclectic feel.

Based on the overarching theme of raw fish – as sushi and ceviche are central to both cuisines, it was the teppanyaki that truly caught our eye. We chose the Yakisoba, a delicious and simple combination of noodles, diced vegetables and bonito flakes with the smallest hint of white fish peppered within. To say that we inhaled this dish would be an understatement, we absolutely hoovered it!

The chicharones de pulpo al olivo were also fantastic, but admittedly, a bit strange. 3 inch long perfectly fried and tender octopi sat on a long plate with a side salad of cucumber, coriander, peanuts and slivers of what appeared to be lime leaf. Both innovative in their presentation, it was the dipping sauces that were completely bizarre and still leave us with a strange flavor in our mouths. The first, a vinegar, lime sauce with the mere essence of jalapeño, as it lacked any “kick” whatsoever, but paired quite nicely with the octopus. The second, a Kalamata olive mayonnaise sauce that looked as if it was created by Willy Wonka with its awful candy color purple and viscous texture. Absolutely atrocious with the octopus, but might actually go well with a thick slab of grilled steak – god willing.

Last, but not least, the sushi. Having had a few pitfalls in the past, including one horrific experience at Tragaluz’s El Japones, we felt obligated to try at least one roll – generally a safe bet. Unfortunately, our sushi strategy failed, as it was extremely bland, with overcooked rice that swallowed any flavor of the crab, making it a starchy, poorly rolled mess. That said, it was one roll, and one experience, so I cannot fairly judge their sushi without another try, which I’m happy to do.

I’m also eager to try their ceviche: salmon, tuna and corvina (similar to sea bass) with leche de tigre (a concentrated key lime juice, fish and blended aji limo. Word has it that it’s quite good, though like most of their dishes, small in size.

In short, Komomoto deserves a visit if you’re in the mood for something eclectic, different and generally quite innovative. Just avoid the purply gunk!

Komomoto: C/Princesa 35, tel. 93 315 2504, www.grupotragaluz.com; Open: 1-4pm, 8pm-midnight daily.
Website Comment: The Grupo Tragaluz page is a visual nightmare with little to no quality information to help you navigate its ever growing waters. And to make matters worse, Komomoto is not listed on the site, as far as I can tell. Hence, the best information you can find is on Trip Advisor.