Basque-ing in the City

Nothing compares the aromas and tastes assaulting one as he walks the streets of San Sebastian on any given day. Perusing the massive counters of any number of Pintxos bars in the city will bring a grown man to his knees – in adoration, not defeat. So, when an opportunity to learn the art of cooking Basque presented itself to me on a recent trip to New York City, I jumped at the opportunity.

Basque cuisine is heavily inspired by the abundance of food from the sea on the one side and the fertile Ebro valley on the other. Spanish and French influence is strong, but the two rarely meet. There is a notable difference between the cuisines of the Spanish and French Basque peoples. Gastronomic societies pervade the Basque culture. Traditionally composed of only men who cook and eat together in a communal “txoko,” the societies are usually large and formally organized and meet together in a small space owned by a group of friends where they share the food and associated costs. Today, women are allowed into some clubs.

The influence of Basque cuisine is far-reaching. Multiple restaurants in the region boast one or more Michelin stars. Chefs like Juan Mari Arzak, Martín Berasategui, and Karlos Arguiñano have changed the landscape and reputation of Basque cuisine worldwide and have paved the way for discriminating and non-discriminating palates to enjoy the fruits of a cuisine from an area heralded to be one of the oldest civilizations still in existence (and they will make sure you know it). What was once a discreet corner of Iberia has today taken center stage on the world gastronomic scene.

The Basque cooking course at The Institute for Culinary Education (ICE) was its first, and I just happened to be in the proverbial right place at the right time. Having taken two courses previously at ICE, I expected that the course would be informative and entertaining. I was not to be disappointed. Chef Daniel took us through a brief history the Basque region and its unique cuisine. Next we reviewed our “menu” for the evening – ten dishes and three hours stood between our class of a dozen students and Basque food bliss. It was time well spent. The dishes were reminiscent of my time spent in San Sebastian and piqued my curiosity to explore the cuisine in more depth. Following I have included three recipes from the class (all recipes courtesy of ICE). Give them a try and do not hesitate to step out and try a course or two on your own. 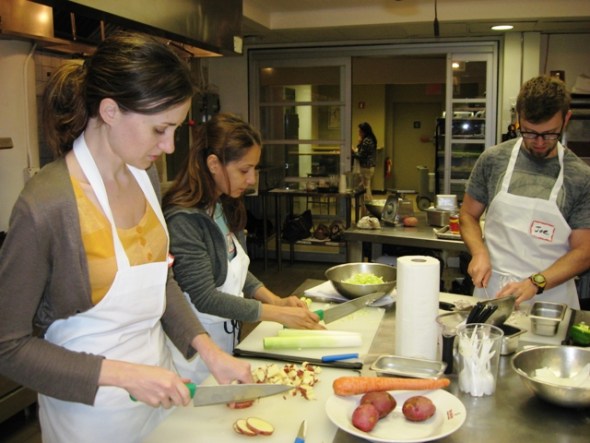 For all salt cod dishes remember to soak the fish for 24 hours changing the water regularly. The fish should be poached but care must be taken not to bring the water to the boil or the fish will become tough. 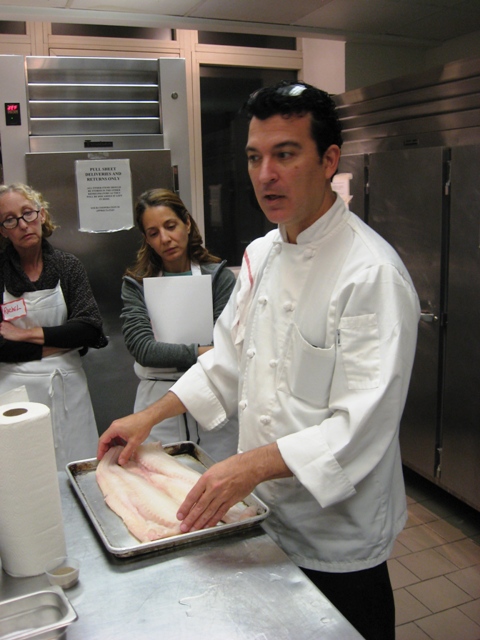