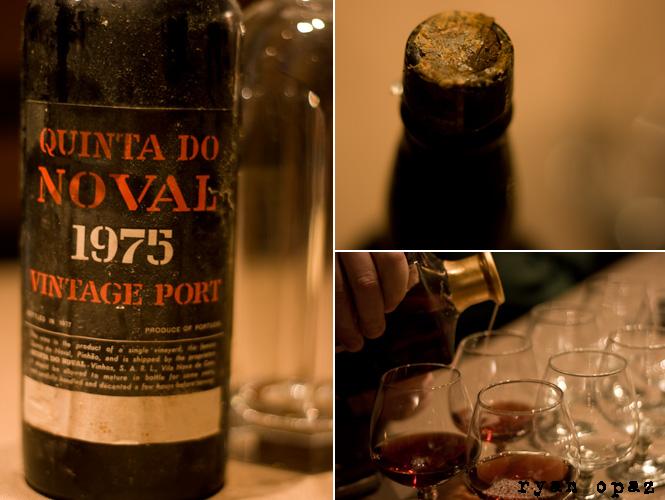 Birthdays for me are a bit arbitrary. One year I feel younger, the next older. No matter the date, tomorrow means I’m one day older than I was the day before, another notch on the bedpost. So I wonder why wine geeks get so wound up about birth year wines. The idea is simple, I was born in 1975 and therefore, all vintage wines of that year are deemed to be extra special due to the fact that it was that year I decided to join everyone else on this small blue rock rotating around a ball of fiery plasma within an infinite universe. For me, 1975 was not the best year to be born a wine geek. Many regions had so-so vintages, and correct me if I’m wrong, but there doesn’t seem to be a wine region who had a phenomenal vintage in ’75.

Last week, I had my 2nd birth year wine of my life time. The first was a uninspiring Mosel-Saar-Ruwer Spatelese, that a good friend, and at the time, co-worker of mine, offered to uncork before I moved to Spain. I remember the ceremony of pulling the wine-soaked cork, and the anticipation as we prayed for a clean wine, free of cork taint and oxidation. Carefully pouring the Spatelese into the appropriate glasses, we dipped our noses deep into the bowl to find, not cork odors, but rather, enough oxidation to have left the wine with little to no character. Simple flavors of apples and light honey notes gave us a wine that, while not stellar, was drinkable enough for us to finish the bottle while reflecting on my coming journey. The fact that it was a wine from 1975 probably made it more palatable, but it was its faded color which helped me to feel satisfied that at least I had aged more gracefully. Knowing the weakness of the 1975 vintage, I didn’t expect that I would again taste another birth year wine, and so I savored every last drop – enjoying it for what it was.

Last week, while in Norway, I had the chance to try yet another birth year wine. My uncle and aunt found one another approximately 20 years ago, potentially encouraged to continue their courtship when they discovered they each carried with them a bottle of the Quinta do Noval 1975 Vintage Port. One was a gift to my aunt from friends, the other was a duty free shop purchase by my uncle as he ran to catch a plane. Last week when my uncle shared with us this story, he held the bottle in hand and said, “I think we should open this wine. What do you think?” A few years back, they had opened the first bottle with my other uncle, fondly remembering how much they enjoyed it. Hence, my uncle felt that it might be time to open the last one.

Who was I to argue?

So one night, after another large meal, we pulled this treasure out and set to work opening it. The top was slightly crusted with leaked sugars, but the seal seemed tight and the bottle in good condition. My uncle, much to my delight, offered me the chance to open it: a gift in and of itself. Cutting back the now delicate top seal, I was greeted with a dark and dirty cork. After a bit of cleaning, while ensuring the cork was still stiff enough to pull out, I began the process of inserting the corkscrew. The entry was easy, which made me apprehensive that we might have an overly oxidized wine with a cork too soft to still marshal its task of sealing the wine on the inside from the air without. Happily, I felt a pleasant resistance as I began to withdraw it from the neck. The result, as I heard the last pop, was three quarters of a cork, broken and throughly saturated with wine. Looking down, I saw the last bit of the bottom of the cork sitting in the neck as if determined to continue in its original duty of sealing the wine. Corkscrew in hand, I attempted to uncork the fragile remnants at the bottom of the neck; but once contact was made, the cork quickly escaped into the wine below.

The decanting turned out to be easier than I originally imagined. Looking carefully at the stream as it poured into the decanter below, we were met with very little sediment, and unlike other bottles of Port I have opened, only a scant tablespoon of juice was left behind in the now empty bottle. So what did it look like? Well time had not been as kind to this wine as I hope it has been to me. Very light but not incredibly saturated, the wine was transparent with a pretty ruby red color. Pouring it into our glass, I was rewarded with what I considered a gentle and elegant perfume. Cherries and anise were followed by light toffee notes and orange zest, dried like potpourri. On the downside, the alcohol was more pronounced on the nose than I had hoped for and this never did blow off as I have experienced other wines do in the past. Taking a sip, I was happy to note that the wine, while in my opinion, was past its prime, it still held merit and was at the very least, enjoyable. Toffee, caramel, and cherries danced on the palate, while the softness and delicate nature left me with a pleasant lingering finish. Was this perfection? No. Was it enjoyable? Very much so, most likely due to the fact that this birth year wine was a much better experience than my first one.

I’ll continue to seek out wines from 1975. I’ve heard Bordeaux was not bad that year, and I hope that I have the chance to taste many more. Though I do believe that my drinking window for these wines is slowly closing. That said, all wines are birth year wines for someone, and I hope that in the future I can play the role of those that joined us that night and open wines that are special to my friends, family and others who I find myself drinking with. The experience is one I highly recommend. Have any of you had a wine from your birth year, multiples, none? Tell us your story and what it was like, sharing makes the experience only richer.