History of the Bodega from the Bodega
Osborne is Spain’s most prestigious producer of wines and spirits. Headquartered in El Puerto de Santa María, Spain, in the famous brandy and sherry-producing region of Jerez. Osborne currently produces world-renowned brandy, sherry, port, fine regional wines and anise liqueur.
Founded in 1772, Osborne is one of the oldest firms of wine and spirit producers in Spain. The firm’s industrial and commercial activities were started by Thomas Osborne Mann, an Englishman. Upon Mann’s death, his sons, Thomas and John, inherited the business. While John served as a Spanish diplomat, Thomas distinguished himself as an industrious and enterprising manager of Osborne, and in 1869. Thomas received the hereditary title of Count of Osborne, making him the first producer of wines and spirits to posses a noble title.
Since those early years, Osborne has remained in family hands. Today, Mr. Tomás Osborne Gamero-Cívico, the fifth Count of Osborne, directs the Company as Chairman of the Board of Directors.

Catavino’s Notes
We’ve always known Osborne for their famous bull‘s scattered throughout the countryside of Spain. Their sizes and uses vastly range from small stickers stuck proudly to the back of a car bumper to enormous metal sculptures dotting the Spanish landscape. Emblematic and with a rich history, many people relate the name Osborne to Spain without ever having a fleeting thought of wine cross their minds. And with July being Sherry month at Catavino, it would be a shame not to talk about the famous wines that helped make Osborne what it is today.

So, I headed down to the local wine shop and picked up a bottle of their Cara de Gallo Manzanilla and was immediately saddened to notice that it had gone dead with little flavor and no character left. Looking to the back of the bottle, I noticed that the wine had been bottled on the 86th day of 2006, dating it well over a year old. FYI, Manzanilla should not be consumed after the first six months, though in rare cases, it stays good for up to a year. This wine, however, was a goner.

Fortunately, we received a new bottle yesterday, accompanied by a few friends. The kind people at Osborne offered to replace the bad bottle and included 3 others so that we might write up a little something about them. Happy to fulfill their request, we’ve included our notes on the wines below. They are all quite unique and different, but I’d like to point out that we had the chance to taste Fino against a Manzanilla Sherry. By many accounts, Fino and Manzanilla have so much in common that it’s difficult to tell them apart. In fact, at the Official Sherry Educator’s Seminar, these two styles are grouped as one, as a result of their inability to be told apart when tasted blind. The wines we tried last night, however, couldn’t have been more distinct. If I had tasted them blind, I personally think I would have known they we’re different, but not necessarily by style. Both were light and racy, though typical to the “theory”, the Fino had more body and came off as richer. In a blind tasting, I might not have noticed. 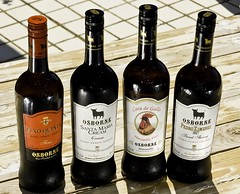