When was the last time you picked up a copy of Odyssey by Homer and read it from cover to cover? In curious wonder, you scratch you head thinking, “I know I read it, but for the life of me, I can’t remember the details.” I too went through the same mental gymnastics routine, finally recalling how I: hated my teacher for making us study the ridiculously difficult language, loved the book when curled up in our hammock in my brother’s sweatshirt smelling the the rich and crisp aroma of fall, and felt mystified by a culture that seemed so different from my own. Greek mythology sucked me in like a good thriller should, filling my imagination with adventure, romance and intrigue. Although I would never admit this profound adoration of mythology to my classmates, I remember secretly wanting to have the strength of Athena and the beauty of Aphrodite.

Joseph Puig and his daughter Silvia were equally infatuated with Greek mythology when they first bought Viñedos de Ithaca in Gratallops, DOC Priorato, recalling how the Greeks first cultivated the land with the ancient grapevines they saw before them. Acutely aware of the historical significance, Silvia and Joseph wanted to pay tribute to the ancient winemakers by naming their winery, Viñedos de Ithaca, after the kingdom where Odysseus was born.

A memorable story with a memorable name, no?! What’s amazing about this winery, is that they carried this whimsical and witty style of honoring the ancient Greeks into every element of their winery. For example, rather than organizing their barrels with a practical, yet incredibly boring, numerical system, the Puig’s chose to label each barrel with a mythical name like Kronos and Argos. Wine should be fun, an idea Joseph and Silvia hold close to their hearts. In the middle of one of the most prestigious and renowned wine demarcations in Spain, they could have easily swung the pendulum to a traditional stance, placing their wines on a pedestal. But they didn’t. Instead, they named their wines Odysseus and Penelope (Odysseus’s adoring wife) because it’s humorous, it plays upon a theme, and I guarantee you, I’m going to remember the Trojan horse on the label of the 2006 Odysseus Garnatxa Blanca. Why? Because it’s an emblematic Greek symbol with a Greek name on a Spanish wine.. 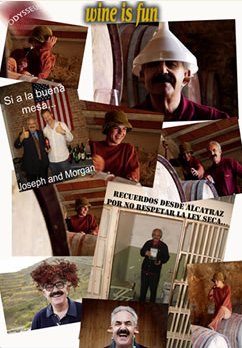 As for the 2006 Odysseus Garnatxa Blanca? Incredible! Granted, we typically love wines made with Garnatxa Blanca, but the elaboration of this particular wine was phenomenal. Not only does it have those delicious citrus and floral qualities this varietal is known for, but it’s a wine you can imagine pairing with a cheese plate, grilled chicken, light garlic pasta or even on its own, while listening to jazz.

And to top off this post, allow me to give mega accolades to Joseph and Silvia for creating a killer website. Unlike several Iberian websites we come across on a daily basis, their website is functional, interesting and well-designed. Does it have some minor bugs, sure, but whose doesn’t. What matters is that I can get the information I need in a very short period of time. The only pity is that they don’t have a blog incorporated into their website so that I have the opportunity to follow along with in their adventures! If they did end up incorporating a blog, I could very easily see them creating a similar style as to what Jeff Stai is trying to do with Twisted Oak Winery where wine is perceived as fun and interactive.

Available in the US for $25-33 a bottle, we highly look forward to tasting more of their wines!

2006 Viñedos de Ithaca Priorat Odysseus G – Spain, Catalunya, Priorat (9/10/2007)
Light pale golden color. The nose is intoxicating and alive with white flowers, peaches in syrup, light green herbal notes, apricots and more. Really a fun wine to sniff! In the mouth this wine has a rich body to it with a medium acidty and a strange sweetness that ends dry. Light mandrain orange, peach, orange zest, white flowers…almost honeysuckle, all combine to leave your mouth a richness that lingers. The finish while dry has a note of slight bitterness, perfect to leave your mouth looking for more. This is what I love about Granatxa Blanca.

2006 Viñedos de Ithaca Priorat Odysseus G – Spain, Catalunya, Priorat (9/12/2007)
Pale caramel or cooked peach color with fabulous sumptuous aromas of canned peaches, apricots, vanilla, white aspen and slight floral notes. As the moon slowly diminished in the size, the aromas became bigger, bolder and more savory. The mouthfeel was creamy, like homemade vanilla ice cream, with rustic flavors of peach, mandarin, vanilla and buttercups. The finish was dry, yet silky, providing the ideal sensation for one more sip. This is a gorgeous wine!