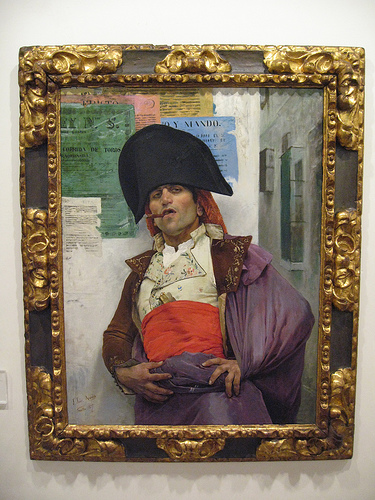 Editors Note: Our Correspondent Justin Roberts had the chance to do something both Gabriella and I wish we could have. Living in Jerez, he made a quick trip over to Bodegas Tradicion to give you a bit more background on this intersting winery that we talked about a couple of weeks ago. Enjoy.

You don’t usually find an art gallery inside a sherry bodega, but that’s exactly what you’ll find at Bodegas Tradicion. In 1998 this small bodega was set up by a Spanish property magnate and in a special gallery alongside the sherry he likes to rotate part of his large collection of paintings. On the day I visited these included the striking oil on copper called “Bandolero Toreroâ€ byÂ Jose Jimenez Aranda (left).

Joaquin Rivero is on the Forbes billionaire list and apparently worth about 1.7bn US dollars, so the first thing that springs to mind is that Bodegas Tradicion is simply a rich man’s play-thing, but scratch the surface a bit and it gets interesting. It turns out Mr Rivero is a member of the family who owned the sherry producer J.M. Rivero. The Rivero bodega sold their wine under the “CZâ€ brand and although they faded away many years ago they are of blessed memory in the trade. They were also one of the first bodegas on the scene, starting up in about 1650. It seems the whole history and tradition of sherry really does course through Mr Rivero’s veins.

Pepe Blandino, the capataz, showed me around the bodega. Capataz translates as “foremanâ€, but in the sherry trade this word means a lot more – more like a cellarmaster or “maitre de chaiâ€. Pepe explained the goal of Bodegas Tradicion is to specialise in very old wines: the VOR (20+ years) and VORS (30+ years) categories so only Oloroso, Palo Cortado, Amontillado and PX wines are made. They also age some Brandy de Jerez and have few butts of vintage “añadaâ€ sherry. A representative from the Consejo has to be present when the añada wines are drawn off for bottling – the butts are sealed with wax and ribbon at all other times. 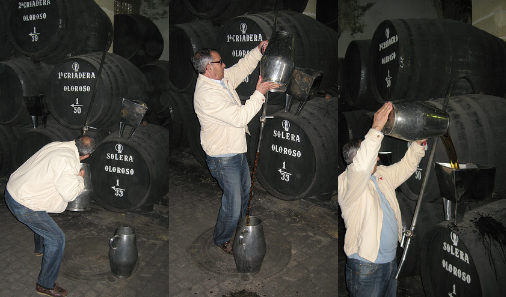 The Tradicion soleras were built up by securing butts of very old wine, many of them from Agustin Blazquez (which was owned by Pedro Domecq). Pepe knew the Blazquez wines very well as he had worked at Domecq from 1963 until helping to set up Tradicion in 1998. Now that the Tradicion soleras are up and running, Pepe keeps them topped up with 14-15 year old wines, which he selects and buys in. Pepe aims to procure clean, well-made, almost neutral wines which will take on the characteristics of the liquid already in his soleras. All their wines run through seven stages in the solera. For the last three stages the scales are run by hand, in the traditional way. Pepe even gave me a demonstration using the traditional tools of the trade – the sifon, jarra and canoa.

The most remarkable thing is how crystal clear and shiny the wines from the last solera are straight from the butt – the local description for a wine like this is “rompecopasâ€. There is no need for filtration before bottling. One of Pepe’s biggest challenges is securing old butts, which should be at least 40 years old, and he likes to try the wines which they have held before buying them – to ensure they impart the required characteristics onto the Tradicion wines. To do this he has to work closely with a local cooper and the process can take many months. This does make reaction to changes in the market difficult. For example interest in PX wines has increased in recent years, but securing more butts and increasing the PX solera will take time. The whole Tradicion business is small, traditional and the quality top end. The wines are hand-bottled and numbered. Something which caught my eye in their sample room: Tradicion make the house Sherries for Fortnum & Mason in London, another mark of quality!

Finally, a video of Pepe Blandino demonstrating how to fill a sherry copa from a “venencia”, the traditional tool used to draw wines out of the butts. Pepe does this with nonchalant ease, I can promise you, it’s a lot more difficult than it looks – when I tried the wine went down my shirt sleaves and onto the floor!

How to use a Venencia