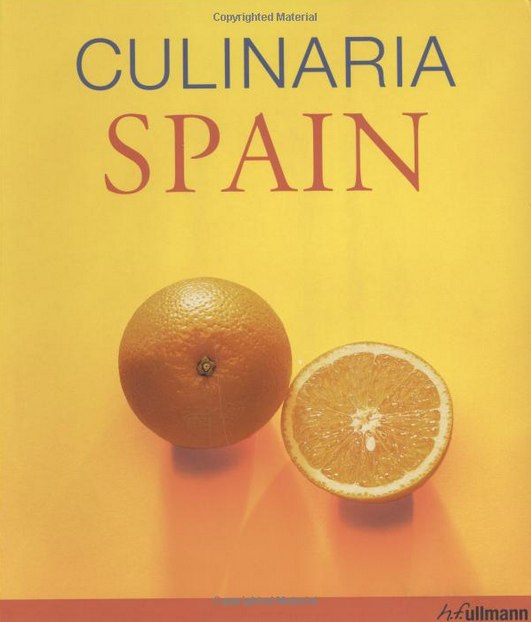 Culinaria Spain is a coffee table book not really designed for the spots and spills of a working kitchen, and I believe its creators never intended it to lean up against the counter backsplash while you took a whack at fideuà (Fideo). It is part of a series that has raised the bar in the unique experience of armchair cooking. Like its kissing cousin, armchair travel this cooking experience requires a comfortable seating arrangement with good light and inviting setting that easily brings you to spend more time than you intended when first sitting down. It is about the joy of imagination, and if you’re craving a dash of creativity, Culinaria Spain is an outstanding companion for your journey.

These are not books to read from cover to cover. Rather they are carefully designed for the food flaneur to aid as you wander down the pathways and byways of your personal culinary adventure.

Now for those of you that do not include the word flaneur in your working vocabulary, let me try to share with you. Wiki in its encyclopedia says the term comes from the French and has the basic meaning of “stroller”, “lounger”, “saunterer”, “loafer” …..ah there it is: loafer. Precisely. Astride a comfortable chair with a book when open, that is the size of a toy poodle or a small dachshund, you settle in. You lay the book in your lap so as not to tire your arms. We are men. Big is good! Through the aid of pictures and text, charts and graphs cooking and dallying without a dirty pan in sight. No kitchen to clean nor stove to wipe down. Let your fingers do the walking and your eyeballs do the shopping. It’s a gentleman’s manner of enjoying the arts of the kitchen. I am only guessing that they appeal particularly to men. Most cookbooks are linear asking you to proceed from here to there. They are designed for the attentive. These on the other hand are wanderer’s books. I don’t think there would ever be a James and Julia.; some guy cooking his way through Mastering the Art. I can’t imagine that. Julie & Julia are orderly tidy people comfortable in the instructive and nervous pathway of skills acquisition. Not a man’s way. It is too much like unpacking the box, taking out the directions, reading them from beginning to end including the not to be missed safety tips and then assembling the whatever. Where’s the sport in that? We are flaneurs. We like to wander through the assembly process. Discovering. And that is what the Culinaria series offers the reader. The opportunity to meander from geography to history onwards to technique and agriculture. You can add a bit of viticulture and some distillery and all of it visual. Great graphics, terrific photography and recipes that are brief. Not energy consuming. Never planting a fear of error.

I am guessing there are many authors of this book. Many writers. Many photographers. Many mapping specialists and many recipe authorities. In the final assembly this is a tremendous success in art direction as it calls on the whole arsenal of modern graphic design. There is not necessarily an author in the traditional sense of cookbook writing but there is a creator. It is someone whose taste level controls every page and every entry. Editorial shaping is a reality of the cookbook as a genre. Sometime it is beneficial, and sometimes it is distorting. The experience you have with Culinaria Spain is the creation of a strong willed, decidedly opinionated man whose name appears on the spine: Konemann.

Now for you students of business scrapes (or scraps?), the New York Times identifies Mr. Konemann as Benedikt Taschen’s former partner turned rival. Ludwig Konemann was for 13 years the sales director at the Art Book publisher Taschen. They parted ways and in 1993 Konemann formed his own company beginning by selling music scores followed by a book on cars which apparently was more to his unique taste for what I call the ability to blur. Think of his countryman Manfred Eicher achievement in recording arts. With his unique taste he blurred the commonly held distinction between classical music and jazz.

Konemann’s books blur the distinction between the cookbook and the art book. They are as much a home furnishing accessory as a vase or a unique picture frame. They are formidable glossy editions influenced by the museum quality art productions of his former publishing life in partnership with Taschen. And he remains with his big toe in the stream of the art edition with a significant catalogue of painting, drawing, architecture and profiles of major museums and their collections. Now his ex-partner is worthy of a note at this time. And I am certain he would be the first to agree because Benedikt Taschen is a truly gifted man in many ways particularly when it comes to drawing attention to himself.

But as a food and wine guy, I am less interested in Taschen’s achievements in art, celebrity and high end eroticism than I am in his former partners unique vision. Ludwig Konemann certainly deserves attention as one of the most innovative designers in the cookbook genre. He was not the first to the market with a armchair cookery volume big enough to force you to sit and browse with the enticement of sumptuous food photography. In the nineties, Weldon Owen publishers released their not so subtly titled series The Beautiful Cookbook with editions featuring the food and scenic morsels of Italy, France, Thailand, China, Mexico and the United States regions. They were coffee table big. As far as they went, they were lovely, but Konemann had the vision to go further. Like his ex partner he does not make the mistake of underestimating the intelligence of his audience.

One must face the fact that cookbooks get dumbed down by editors on the mistaken idea that the reader would not want to worry her/his pretty little head about diversions and facts to place the food in a context; a substantial context. Substance is what makes the Konemann editions more than just a pretty face.

In Culinaria Spain, the two page 29 photo detailing of the cutting of Iberian ham is only one of many jewels that take the reader far beyond the CPT of Spanish cookery- Calcots, Paella and Tapas. The four page fold out on tapas is best thing to happen to folded paper since Playboy committed to the centerfold. The book can comfortably claim to be a comprehensive source book on the subject of Spanish cuisine. Culinaria Spain will take up a lot of space on your coffee table or bookshelf but not an inch of it will be wasted. Thanks Konemann staff!

Burt Frink lives on a high floor of the tallest building in a leafy American suburb with a seldom played baby grand piano, an often petted, walked and fussed over tiny dog and fourteen hundred cookbooks which he cooks from daily. These books would be considered an obsessive personal weakness if he didnÔÇÖt justify his behavior by cooking. Asked why he collects books on food and wine he says God told him to. Pressed further on that event he says that her voice (God that is) sounds somewhat like Sharon Stone, Lauren Bacall and Joan Greenwood melded together. She sounds nothing like Tina Fey. He has collected for forty years. Some consider him opinionated.