Book Review: “The Wines of Rioja” by John Radford 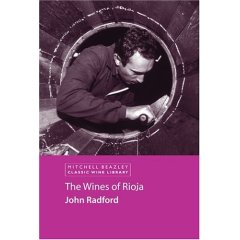 Now that our Rioja is coming to a close, with only a few remaining articles in queue to be published, it’s time to give you the skinny on whether or not it’s worth your time to pick up the all knowing Spanish wine expert, John Radford‘s, book on La Rioja. Published in 2004 by Mitchell Beazley, now Octopus Publishing, this a great book for anyone with deep passion for Rioja wine or who simply enjoy a good reference book for their library.

Having already read several of Mitchell Beazley’s books, we weren’t entirely sure what to expect. Would it be a bone dry read that could be used a sedative before bed, or would it actually be engaging, adding a little depth and spice to a rich cultural tradition? To be honest, it was a bit of both. The majority of the book is used as a directly of over 400 wineries in La Rioja, containing everything from the name of the winemaker to how many hectoliters are produced annually. However, as a result of John’s wit and curiosity, you’ve also got a great story on John’s visit to the wineries, an in depth looks at the history of the region, as well as several cultural tidbits of information that give you more than simply a directory.

Over the past two months, I’ve used this book to aid in my research on the etymology of Rioja, the different classifications of Rioja wine and general information about specific wineries that we couldn’t visit but tasted their wines, such as :Martinez Laorden, La Rioja Alta, Ostatu, Ysios, Marques de Arienzo, Aldonia, Vallformosa, Contino, among many others. To be honest, this book has been a god sent, aiding me when I needed to know how to spell the name of a specific winemaker, the soil type of a region or how a specific grape variety is used to enhance a blend. Basically, it’s been my “go to” guide whenever I’ve had a question or needed confirmation on a factoid I had read.

Part of the reason why I’ve put so much stock in this book is because John Radford is legitimately a superstar here in Spain, renowned for espousing on his intimate knowledge of the country in a witty and intelligent way for over a decade. And having already read and thoroughly enjoyed Cook España, Drink España and the Wines of Spain, he already gained our respect. Plus, if he wasn’t so articulate and such nice guy, we’d completely ban him from our site for making us look bad 😉 Unfortunately, we can’t help but promote him as he’s obviously passionate about the subject, in addition to being an objective and talented writer.

“Everything is not perfect in Rioja…There are criticisms in this book, but I hope that they will be taken in the spirit inherent in Brutus’ speech in Shakespeare’s Julius Caeser: ‘Not that he loved Caesar less, but that he loved Rome more.’ And a more modern cliche to finish with, borrowed from a former president of the United States: ‘There’s nothing wrong with Rioja that cannot be cured by what’s right with Rioja.”

We look forward to an update of the book, as the last edition was released in 2004, hopefully including a comprehensive list of new wineries, contact information and an update of regulations enforced by the D.O.Ca.

You know that ever-so-frequent moment when your mind starts drifting to a tropical island filled with swaying palm trees, soaring cliffs...

If you’re craving a vivacious botanical garden of volcanic soil where shoots permeate from even the smallest of surfaces, you’ll adore...