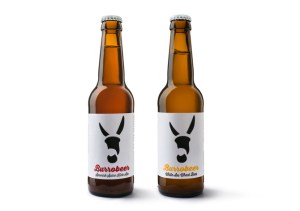 I’ve known Dominic Lombard for many years. I believe we met when he was still slinging other people’s wines at fairs and spending more time in a plane than on the ground. On and off we chatted through the social networks, following one another’s most recent projects, which included his Blackboard wines. A fantastic example of a successful wine brand, it was no surprise when I heard he had a new project in the works: Burrobeer.

Great products need great packaging, and Burrobeer has it. It’s clean, simple and to the point, but the best part is what’s inside the bottle. Dominic decided to go with a wheat beer and a spiced ale. Both styles I tend to look at warily as they often fall apart in execution. Add to the fact that the beers are brewed in Rioja by Mateo y Bernabe, and you have one skeptical consumer. Mateo y Bernabe has some slick packaging, but their beers need to mature a bit in style. Clearly, you can judge everything by the outside of the bottle.

The wheat is elegant and delicate, not overflowing with banana, lemon or coriander flavors, which happens when a brewer isn’t confident in the direction of the beer. It’s refreshing and leaves you wanting more. While the spiced ale, something that I rarely reach for, was surprisingly delicate and not heavy handed. Both I’ll be seeking out again soon!

I reached out to Dominic for a little Q&A, which I’ll leave you with, but allow me to be clear. The next time you’re in Spain, find Burrobeer. You won’t be disappointed.

What was your goal with each beer when you went to create it, in terms of style and flavors.

Our goal is to produce a well made bottle conditioned craft beer that people can relax and enjoy and that is available all over Spain and in the future, further a field. This project for me means having a business that works so that I can have fun, experiment and build a great team. We decide to start with 2 very different beer styles for the following reasons.

How do you honestly feel they turned out? Any surprises?

I am very happy how they turned out, as we wanted to make really top quality Spanish craft beers that bottled conditioned in bottle and feel we have achieved it. Don’t try and work with donkey charities. I explain this below. With the beer quality no, (touch wood) as we are brewing under contract with a great new brewery, but in other areas, yes of course, but I like to think of them as learning experiences. I have been working in the Spanish wine world for over 8 years and this is a very new sector in Spain, so I did make some silly mistakes such as putting the same coloured bottle cap on both beers, when most Spanish bars have stand up fridges and the barmen identify the beers by the bottle cap colour.

The first batch we did a dry run of 3,000 bottles of each beer, which we sold out of very fast. Depending on how the national launch in Spain goes, and the market reaction, we would be looking to produce 20,000+ bottles of each beer per month between now and the end of the year. The future, I would like to say, a lot more. In the near future, we will be bring out so special edition beers for some special events in Spain next year. One of the projects, we are going to work with someone from a different sector to bring out a limited edition for a very special event, so I am expecting that we will have some new learning experience in the future.

I have teamed up with the Spanish wine group Vintae as they have a very similar vision in design, work ethics. I approached them and they loved the project and understood it perfectly and are going to distribute Burrobeer in the Spanish market. We hope to be the first Spanish craft beer that is available nationally in the horeca sector (Restaurants, bars, wine shops, etc). We are in talks with the Corte Ingles though it early days but they would be the only major retail chain that we would be willing to work with in Spain. First we want to get the Spanish market working well and then we will concentrate on the export markets though we are in talks with companies in Ireland, UK, Sweden, Finland, Japan, Belgium and the USA.

Where does the logo come from?

Three generations of my family worked for Guinness, and I have always had interest/dream of having my own beer one day. I started the project with the idea of only exporting the beer and working with a donkey charity giving them certain amount for every bottle that was sold and free advertising on the labels and cases. Why a donkey? I guess they reminded me of my summers during childhood in southern Europe. Donkeys I have always thought of as a hard working, nice, funny animal with mal leche (bad attitude).

I contacted the world’s largest donkey charity, and they were rude, completely unrealistic and wanting a massive upfront payment even though I had explained that I was a small up and coming Spanish craft brewer and not a multinational brewer and I was told more or less where I could go with my donkey. So then I contacted two other donkey charities and they where also a complete disaster. I did have one of donkey charity’s marketing/PR people say to me that they didn’t think that it was a good idea that a donkey charity had involvement, or that they where seen to be receiving money from, an alcohol beverage producer. I did explain to my knowledge I had never known of or met a donkey with an alcohol problem and didn’t see what the issue was. Since I had already invested so much time, and also at this point, money, I decide to keep the famous donkey stubbornness and keep going with the project without any charities.

The name came because I like to use Spanglish and that I found that the two words Burro and Beer sounded well together. I had a very clear idea that I wanted a very simple and easy image to remember stencil like, that the image gave a relaxed urban street feel and that it was a image that would be remembered by anyone know matter what language they spoke. Being really honest I think I was slightly influenced by the street artist Banksy, as I really like his way of getting his message out using very simple images in a very smart urban marketing way.