Casa Montaña, a Fantastic Wine Bar Hidden in the Shadows of Valencia 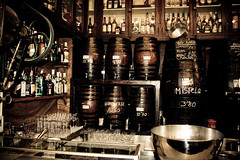 There are bars and there are great, secret gems well worth going out of your way to experience. In the city of Valencia, Casa Montaña happens to be one of those incredible finds completely saturated in both history and beauty.

If left to our own devices, however, we would have never have found this bar, as it’s tucked away between Puerto de Valencia and Mercado Cabanal in a tiny residential street in the area of “El Cabañal”. But because our trusted guide, Joantxo Llantada , just so happened to be the head of tourism for the regional government of Valencia, we were clearly in good hands, able to both learn about the Valencian culture and cuisine over the course of a lazy afternoon.

What makes this restaurant so unique and special? A very romantic and winding story. In 1836, the restaurant was separated into two houses, one occupied by a love-struck son, and the other by an equally smitten daughter. These two married, eventually living in the back of the house and setting up a small and intimate shop in the front in 1836, where they became renowned for their bottled soda water, derived from the well not 10 feet from the bar. Conveniently located near the shore, their name eventually spread among sailors, who would purchase their goods for their long journeys across the Mediterranean. 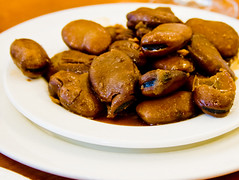 In 1970, the shop was taken over by a well respected Frenchman, who implemented a tapas bar, including a billing system where customers tabs were written on the marble bar with soap – one of many antiques you can view in the bar today. Twenty years later, the bar came into the possession of Santiago Polo, who expanded the tapas menu to include patatas bravas and marinated anchovies, while adding a few much needed tables for patrons to enjoy the dark wood interior and marble tiled floor. Currently, Casa Montaña is owned by Emiliano Garcia, who with his family, took over the establishment in 1993, to create a lively, culturally rich restaurant singularly focused on exceptional food and wine. 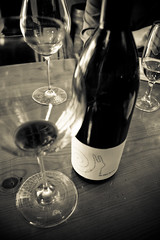 Unbeknown to us, Casa Montaña is also the proud owner of Bodegas Aranleon, producing wines not only from Valencia, but also Utiel-Requena, Rioja, Toro, Galicia and the Penedes. We had seen their wines on several occasions, but hadn’t had the opportunity try them. The Aranleon Solo 2005 is made primarily with old Tempranillo and Bobal grapes harvested from non irrigated bush vines, along with a touch of Syrah sourced from irrigated single-cordon vines in Utiel-Requena. Grapes were manually picked throughout October, completed two months of batonnage and then aged for 14 months in 1 to 3 year French and Hungarian oak.

Overall, this was a very approachable and food friendly wine. From the first pour to the last sip, the Aranleon Solo 2005 was soft, yet dense, with aromas of dark Mediterranean fruits and spices like black olives, black cherries and plum. In the mouth, the wine shows soft, fine tannins, good acidity and fresh floral notes of violets and lavender. Priced at just over $20, it’s a great wine to pair with pork tenderloin.

If you happen to be passing through the city of Valencia, take a moment to visit Casa Montaña, and say hello from Catavino!