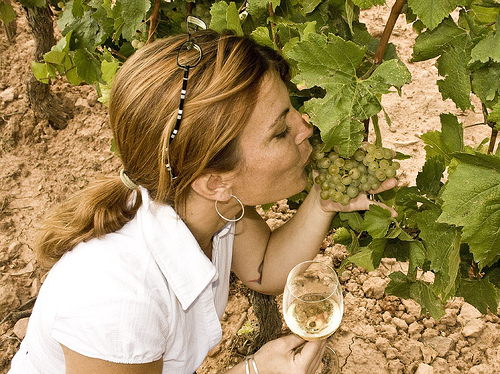 As mentioned a little while back, when I first learned about Castilla y León as a quality wine region, I associated it with red wines and only red wines. Because of Toro and Ribera del Duero‘s massive influence on the market, Rueda seemed more of an exception to the rule, rather than an indicator of what could potentially come out of the area as a steller white wine region.

Our trip covered 6 of the 12 wine regions within Castilla y León (D.O. Cigales, D.O. Arribes del Duero, D.O. Tierra del Vino de Zamora, V.C.P.R.D. Valles de Benavente, D.O. Bierzo, D.O. Tierra de Leon), all of which leaned to the smaller and more obscure side and each focused on one specific producer. Hence, I think it’s important to note that my perceptions are based on a very small sample, and should be taken with a grain of salt.

Verdejo, Godello, Malvasia and Albarín (not to be confused with its westerly neighbor, Albariño, a grape I’ll discuss in more depth at another time). These four grapes embody my new campaign to put Castilla y León on the map as a quality white wine producing area. Although, what’s interesting to note is just about every winery we visited failed to showcase their whites during the formal tasting. Instead, they were brought out as afterthoughts, appearing unworthy of our attention. The irony is that these were my favorites. They were fresh, crisp, approachable and desperately calling out as the perfect refreshment on a hot summer’s day. It was these wines that showed good structure, fabulous acidity and lovely herbal, citrus and mineral flavors. It was these wines that I so wanted to shove in my suitcase and bring home. But the excitement didn’t stop here, there were even some producers not only creating some interesting barrel fermented white wines, but also a few barrel aged whites that showed complexity, body and balance. And let’s not forget the 100% Godello Sparkling Wine from D.O. Bierzo that made my clumsy two step at the restaurant turn into a beautiful Tango. Finally, the dessert wine made with Albarín that held the perfect amount of sweetness and structure to be the protagonist of any dessert course. These wines were fun, different, unique and exciting for me, absolutely provoking more experimentation in the near future.

Of the rosés, I tasted some promising ones, and some rather mediocre rosés as well. But to be honest, I’m finicky with this style of wine, and tend to prefer rosés that fall to the drier side, and to my great luck, this was exactly what I found. The rosés were generally quite dry, showing lovely acidity, nice red fruit flavors mimicked on both the nose and palate, and a lush round mouthfeel. Others showed a racy acidity, which tended to make me enjoy the wine even more. These are wines equally worthy of seeking out especially from producers such as Bodegas Otero, producing two very different vintage rosé wines from the Pago de Valleoscuro Rosado 2007 and 2008; in addition to Bodegas Concejo Carredueñas Rosado 2008 and Bodegas Agribergidum Castro Bergidum Rosado 2008. I had also had the fortune of trying a 1970 Rosado from Bodegas Otero. Made from 50% Prieto Picudo and 50% Tempranillo, it was sensual, alive, interesting, and clearly, aged beautifully!

Finally, the reds. Although there is a wide range of principle red grapes allowed within Castilla y León, we were primarily focused on five: Juan Garcia of D.O. Arribes, Tinta del Pais (also known as Tempranillo), Garnacha, Mencia and Prieto Picudo. And although the indigenous Juan Garcia grape could easily take up an article in and of itself, I will mention that this particular grape caused many people to form a love-hate relationship with it. While some found its rather unique flavor profile fascinating and thought provoking, others just found it seriously off-setting and unappealing. Personally, I found this grape to make some good, solid wines, but nothing that threw me for a loop at this point. I would argue that there is potential however. Wines made with Prieto Picudo, the indiginous grape primarily found around Zamora and León, is also noteworthy. I generally thought these wines were aromatic, expressive and textured. Unfortunately, the wines I wanted to suggest to you are no longer on the market, but at least you can keep your eyes open for this fun little grape.

Of the reds, Mencia from D.O. Bierzo – a minor celebrity in this neck of the world -Â  was one of my favorites.Â  Generally producing inky black wines with rich aromas of raisins, plum, bitter chocolate, violets and dark spice, and with soft gripping tannins, bright acidity and a lovely lingering dark fruit and spice finish, many of these monovarietal wines were quite lovely.

One important note. Although I thoroughly enjoyed many of these wines, I’d like to suggest that some of the reds seemed heavy on the oak, masking both the quality of craftsmanship and the fruit. However, when paired with food, some of these wines came alive. I have always believed that Spaniards, and many of the Portuguese, do not make their wines for sipping at cocktail hour, but instead, focus on their mealtime performance, which clearly came through in this case.

Overall, I truly believe this region shows a considerable amount of promise, and in near future, we’ll go into great depth on some of wineries, winemakers and indigineous grapese of Castilla y Leon, which I feel, are worthy of exploring.

Truth be Told: The first picture in this article is not actually from this specific trip, but as all my white wine pictures came out horrifically, I had to improvise 🙂