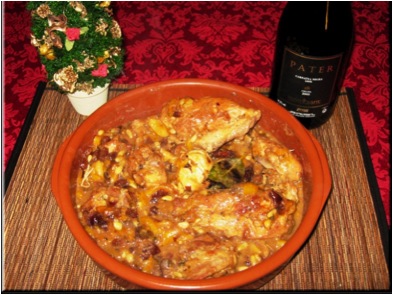 Whether you live in a bustling metropolis like New York City or a quiet Catalonian countryside the holidays are about food, family, and fun. I must admit that I would rather spend my holidays in Spain, but as with most of us this can be quite cost-prohibitive! So, I opt for the slightly chilled air of San Diego, California; but that does not mean that my holidays need be void of Spanish influence. As a result, “Cataluña in Californiaâ€ became a reality in 2009.

As most are well aware, Spain is a country rich in tradition. Would you expect the holidays to be any different? Not hardly. The holidays provide yet another reason to celebrate and party. Who can resist the tradition of the “caganerâ€ (the pooper)? This small statue of a Catalonia peasant, wearing a traditional red beret, and sitting with his trousers down in a squatted position, usually finds its way into El Pessebre – a representation of the Nativity Story. This tradition is said to have existed since the 17th century and it is believed that his “fertilizingâ€ of the ground is to ensure a bumper crop for the following year. Christmas Eve and Christmas Day tend to be about family and a little less “eventfulâ€ than ours – the real action happens on El Dia de los Reyes (“Three Kings Dayâ€) when the kids get their presents. This year I decided to throw caution to the wind, the turkey out the window, and cook a traditional Catalan Christmas dinner.

Armed with a glass (well, actually a bottle) of 2006 Gramona Gran Cuvee Cava and my recipe for Pollastre amb Prunes i Pinyons (“Chicken with Prunes and Pine Nutsâ€) that I retained from my cooking vacation at Catacurian earlier this year I began the daunting task of recreating a traditional Catalan Christmas meal in my San Diego kitchen. Oh, but where would I find the famed blue-legged chicken that roams throughout the Catalan countryside? As (bad) luck would have it, nowhere near me. So, I decided to visit my local butcher and have him cut up a fresh whole chicken – sin las piernas azules (without the blue legs). Honestly, I really miss seeing the remarkable array of poultry (head and all) displayed throughout the stalls of the Boqueria in Barcelona. My locally butchered hen would have to suffice. Be it known that she did not give her life in vain.

Directions:
1. Salt and pepper chicken on both sides and set aside
2. Add pork lard, a few tablespoons of olive oil, and the cinnamon sticks to a large Dutch oven pot over medium heat
3. Set chicken in pot in a single layer and let cook about 20 minutes, turning once
4. Add onion, whole garlic, and bay leaves and sauté with chicken for another 15-20 minutes
5. Add brandy and flambé (to burn off alcohol)
6. Add prunes, apricots, raisins, pine nuts, white wine, and thyme and stir together
7. Add water or low-sodium chicken broth (add more later if necessary to keep from getting too dry)
8. Reduce to low heat, cover, and xup xup* for 45-60 minutes, stirring occasionally

*What the heck is “xup xupâ€ you ask? Xup xup is the practice of letting your meal cook slowly to allow the flavors to truly integrate and combine with each other. Simplicity and patience is the art and charm of Catalan country cooking. Xup xup is your excuse to drink the rest of the bottle of cava while you are waiting for your dish to finish (now you know why I started with a bottle). Incidentally, the longer you xup xup the better.

With my chicken and prunes (sounds a little different than turkey and stuffing, huh?) displayed proudly on the table I picked up the bottle of 2005 Pater from the Montsant that I gladly hauled from my last trip to the Motherland. Unfortunately, this wine is unavailable in the U.S. But have no fear, there are many worthy substitutes. The Pater is 100% Garnatxa Negra. I might suggest any number of wines from the Montsant or Priorat as they typically blend with Garnacha. The 2007 Borsao Tres Picos (from Campo de Borja) is also a great pair for this dish. Garnacha (and Garnacha blends) tends to be “lightâ€ enough so as not to overpower the chicken and yet complex enough to enhance the sweet and savory flavors of the dish.

So, what next? Well, in a couple of days we will all celebrate Noche Vieja (New Year’s Eve). This is one tradition that has been in my family for decades (as they emigrated from Spain). Promptly at the stroke of midnight, when the twelve tones are ringing, you eat one grape on each chime (for a total of twelve grapes). You have to do this fast! For every grape you get right, you will be granted one month of good luck. Can I give you a hint? Buy seedless grapes! This ancient tradition is said to have been started by some shrewd farmers some 100 years ago when they had too many grapes left over after the harvest. So at midnight this Noche Vieja you will find me sitting with friends with a handful of grapes and a glass of Cava.