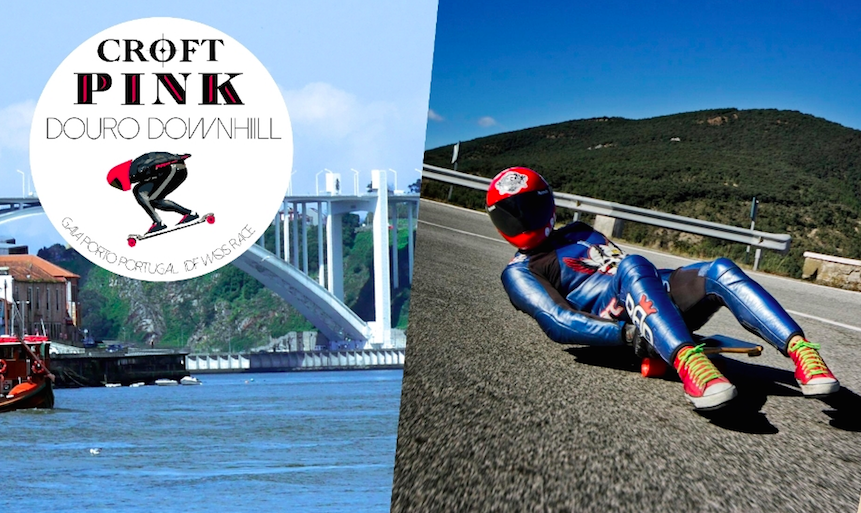 UPDATE:  The race has been cancelled as a result of a reduced number of participants. Please go to the Croft Pink Douro Downhill website for more information.

How fast are you willing to go for a glass of Port wine? 40km an hour for 20 year Tawny? 50km an hour for a 2011 Vintage? What about 100km an hour down the incredibly steep and windy streets of Vila Nova de Gaia on a longboard?!! Sure you’ve got a state of the art helmet, complete with a leather suit and slide gloves to aid in your “damn I’m sexy” appearance, but one look at the terrain and your palms will sweat, your head will spin and your stomach will churn in trepidation. This, my friends, is not for the faint-hearted.

In partnership with Croft Pink, Portuguese longboarder, Nuno Pereira, has brought the 6th leg of the 2014 World Longboard Race to Vila Nova de Gaia from August 14th – 17th. It will be the first World Longboard Race to be hosted in an urban setting, which also happens to be an incredibly steep and windy terrain to challenge even the most talented athletes.

Nuno pitched the idea of sponsoring his participation in the World Longboard Race, as well as the race in Gaia, in an effort to put Portugal on the map. Despite longboarding’s growing trend among international youth, it’s still a far cry from the popularity it holds in the USA. Plus, few athletes have made the trek to Portugal and are familiar with its natural beauty, vast gastronomy or wine culture. This was a rare opportunity for Croft to not only introduce Pink Port to a diverse international audience, but also welcome skaters to two gorgeous cities: Porto and Gaia.

If you have no idea what it is, no worries, you’re not in the minority. Longboarding traces its roots back to surfing, a rather logical jump when you see the similarities between the two boards. Now add the evolution of skate boarding in the 70’s on the west coast of California, an aging population in the 90’s, and soon you have the merging of two wildly popular sports to create longboarding.

A longboard is bigger in both length and width than a skateboard, as well as boasting of greater stability, traction and durability. Additionally, many boards use axels that contain different geometric parameters than a skateboard, which allow for greater maneuverability. A good rule of thumb is that a long board should be shorter than the rider’s height, averaging around 32 to 60 inches.

My first introduction to longboarding came through a video of Spanish girls soaring through thick pine forests and over mountains. As I was based in Barcelona, I felt a kindred spirit to these sassy Madrileño chicks whose single desire, beyond skating, was to break the great gender stereotype that girls weren’t longboarders. They were called the Longboard Girls Crew (LGC) whose videos, photos and short stories were absolutely addictive. Needless to say, I never did jump on the longboard bandwagon, but I did have my interest rekindled after seeing Nuno’s promotional video for the Gaia race (see below).

Who is Nuno Pereira?

Slim, with a boyish charm, this 27 year old designer, innovator and athlete is an ambassador for longboard in Portugal. Nuno isn’t just a fresh faced athlete either, he’s the powerhouse that’s redesigned the longboard to allow for each individual axel to be independently fine tuned to adjust the width, angle, wheelbase, ground clearance and downforce. In addition, he’s also designed the first physiotherapy skateboard in the world, to help athletes recover from injuries.

What you can experience at the Croft Downhill Longboard Race?

If you happen to be near Porto in mid August, make sure to come see this! Races begin at 10 and end at 17. For those of you keen to get up close and personal, park yourself on along the curves of track. Updated racing map here. There will also be a large screen along the Cais de Gaia (river) complete with extra activities and plenty of opportunities to drink Croft Pink Port.

If you’re in need of a map to help guide you among the myriad of Port lodges during your stay, be sure to check out our newly launched Catavino Port Lodge Map!