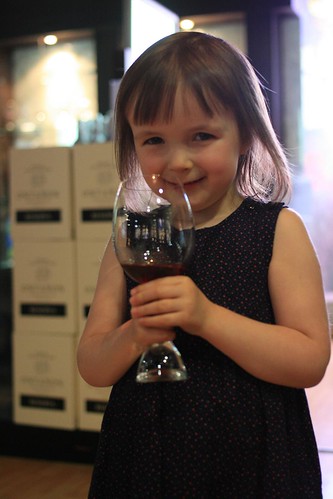 Editor’s note: This article was written in 2006, and I am no longer an English teacher, but the information here is as relevant now as it was then. Iberia does not hide winemaking from children, nor do I sense they ever will. Â

Allow me to begin this post with the pronouncement that I am an English teacher and have been one since my arrival to Spain almost two years ago. The difference now being that in Barcelona, I am kindergarten teacher as opposed to a language teacher to multinational companies. Obviously, it has been quite the transition.

Not only has it been a transition learning how to be a language teacher to small children, but it has also been a transition as an American in a Spanish school. When I was approached with the project of teaching children about winemaking, and that part of the project would consist of taking 55 five-year olds to Bodega Torres approximately 1 hour south of Barcelona, I was a bit shocked. Allow me to give you a moment to ponder the thought of 55 toddlers in a bodega….overwhelming, isn’t it? For those of you who are not familiar with Bodega Torres, I can tell you that they are one of the largest wine and brandy producers in the world, exporting to more than 120 countries worldwide. This winery is so expansive that their wineries are located in three different continents with the intention of hitting Asia in the future. Currently, they have wineries in Spain, Chile and the United States. Therefore, it goes without saying that having a tour by this Bodega is quite impressive and one that I was really excited to do with the children. (Flickr photo by RobWinton)

However, as mentioned, I am an American, and the thought of taking toddlers to a Bodega that makes wine sent strange and uncomfortable thoughts in my head as to what parents might say in the States. “What! You want to take my little innocent Timmy to a winery! What kind of horrific people are you? Why would anyone want to introduce a child to wine at such a young and impressionable age?” It then dawned on me that we now live in the middle of an enormous wine region which has been cultivated as such for centuries upon centuries. Winemaking here is the equivalent to corn harvesting in the Midwest. It is so integrated into the culture that if you yourself do not have a direct connection to winemaking, I guarantee that someone in your family does. Therefore, taking a group of children on an excursion to see how wine is made is not dangerous, frightening or a form of mind-corruption as it might be seen in the States. It is merely a part of the everyday life here in Catalonia. 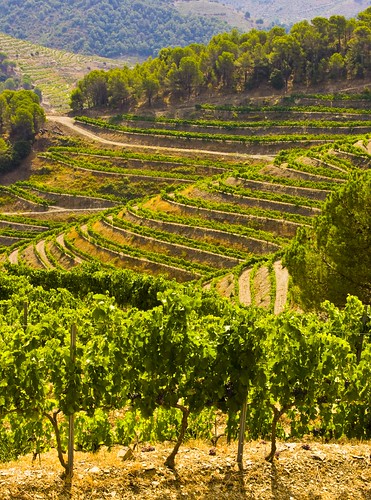 As if the notion of taking toddlers to a bodega wasn’t shocking enough to my culturally naive ears, I also educated as to how this particular school goes about teaching a lesson like ‘winemaking’. The goal of the school is to stimulate all of the child’s senses when learning a lesson so that they can actually experience and put meaning to a lesson. As for the lesson of “winemaking”, it began several weeks before the excursion to Bodega Torres. The first lesson consisted of the children drawing a grapevine located just outside of the school, merely steps away from the children’s classroom. The purpose behind the drawing was not only that brought up topics such as basic biology and history, but also perception. The children had to observe what the vine actually looked like. Was it curvy or straight? Did the grapes grow in bunches or were they isolated? Where specifically was the sun, earth and sky in the picture and were they important? The children also learned how to identify the maturity of the grape by looking at the color of the skin, the size and the season. By asking them if they found the grapes in their local market, they also learned when the harvest took place.

The second day, we chatted about winemaking in general. The children discussed the different types of wine, where they are made, and what they thought about wine in general. On the third day, the children climbed on foot ladders, collected grapes from the vines draped over the courtyard behind the school, de-stemmed the bunches, and then put them in a bucket where they could actually feel the process of pressing the grapes by stepping on them with their bare feet to make the juice. Talk about giving a child the coolest experience ever. What child doesn’t want an excuse to take off their socks and shoes (and typically the rest of their clothes if given the opportunity) and stomp their little toes on wet, cold, squishy grapes?! We had lots of happy children that day.

The Bodega Torres excursion came next where the children received a full on tour of the winery complete with an experienced tour guide for little tykes, a train ride through their entire facility (the bodega most definitely gained points with this one), and ended with a cup full of Mosto wine (unfermented grape juice from their vines). The children were ecstatic by the end of the tour. They saw barrels full of wine, old cellars, the bottling plant, the fermentation tanks and, well, vines. 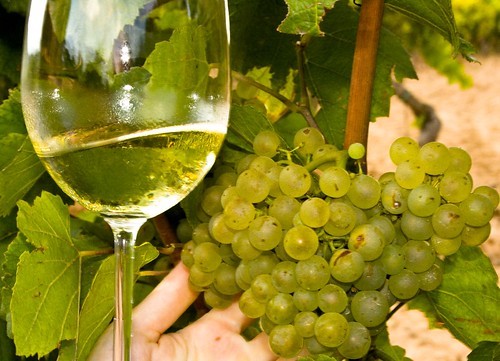 And to prove the pedagogy at the school has some merit, the guide took me aside and told me that our children were some of the most interesting children she had ever given a tour to. When asked why, she told me that the depth of their questions were astounding. “What five-year old asks you what temperature is best for the wine to ferment in? Or how long the wine must stay in barrel before it can be put in bottle? Why we have laboratories with scientists to taste the wine? Or why the barrels must stay in the caves?”Â She was right, the questions were astounding, but more astounding to me was the amount of interest the children had in the entire process by actually experiencing it up close and in person. Winemaking became alive and real, instead of a foreign concept that only lives in their parent’s cabinets, demonised as something only adults can enjoy. The school made the topic have depth. They gave it substance to actually hold onto so that the children could apply the information outside of the school property.

Even after the tour, the children were still required to ponder the experience by doing two more hours of work. The children were split into ten different groups of approximately 5 or 6 students. Each group was asked to do a small project that involved: mathematics – counting and coloring the number of grapes in each bunch; logic- which vine is mature based on the size and color of the grape; art – draw the still life of a press, bottle and glass; music – create a song with lyrics based on what you think harvesting sounds like; literature – after listening to a poem on winemaking, draw what the poem reminded you of; etc. By the end of the day, the students could not only tell you a full recap of the winemaking from start to finish, but had a sensual and profound relationship with it.

For the children, I feel the experience was incredible and Torres did a fantastic job catering to their needs. Do I feel that my needs have been filled as a blossoming wine geek? No. Bodega Torres is a pillar for Spanish wine in Catalonia, owning more than 1,300 hectares of vines, and to only get a small hint as to who they are would be a shame. So not only count on a more detailed article about this Bodega in the near future, but we also hope to have our own adult tour in soon!