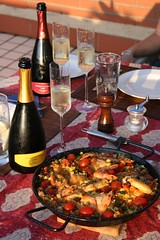 Last weekend, Ryan and I had a tasting of two Cavas we recently received from Bodega Dominio de la Vega – a small, family owned winery located in the center of D.O. Utiel-Requena, located on the eastern coast of Spain just south of Barcelona in Valencia. And like all of the Iberian Peninsula, D.O. Utiel-Requena is not failing to live up to its historical roots from which vine growing has been an integral part since the 13th century.
If we explore its history, the remote origin of wine making is placed in the area of Villares (Kelin) where in 1995 a few grape pips(seeds) were found in the sediment of the main living-area of a dwelling dating from the 5-6th Century BC (amphoras dating from the 7th Century BC have also been discovered). Wine was taken so seriously that the 1479 bylaws of the region required that people guard the vines during the 3 months of harvest in addition to prohibiting the introduction of any foreign wines into the region to preserve the purity of the region’s wines. In 1514, no one was allowed to harvest the grapes until the “authorities” declared the grapes ripe enough to pick and press. Fortunately, times have changed and several international varietials such as Cabernet Sauvignon, Chardonnay and Merlot have been added to the region’s native varietals of Bobal, Tempranillo or Cencibel, Macabeo and Garnacha.

We had the opportunity to try both the 2005 Dominio de la Vega Brut Reserva Especial and the 2005 Reserva Brut Nature with a fantastic Paella that Ryan whipped up in no time flat. And to be perfectly honest, I was relatively skeptical as to how well he could pull it off considering that we had never had a paella that we’ve enjoyed in Spain as of yet. Made with sauteed shrimp, chorizo, chicken, carrots, onions, cherry tomatoes, zucchini, garlic, olive oil, rice and, of course, saffron, it was the perfect dish to have paired with the Cavas. Originally, we had planned to make the paella on the grill, but the weather didn’t look as if it would cooperate with us, whereby forcing us to do it on top of the stove. As for the Cavas, they were both tasty, crisp and well-made wines. Both Cavas are made with 80% Macabeo and 20% Chardonnay and have never seen oak. The brut remains in bottle for eighteen months, while the brut nature not only remains in bottle for twenty months but lacks any additional dosage (sugar) at the end of fermentation.

Sidenote: We have one more Cava from this producer’s highest level, Arte Mayor, and a 100% Bobal made from 3 different vintages. Sadly we didn’t get to taste them for this article but we will be putting something up as soon as we have a chance.