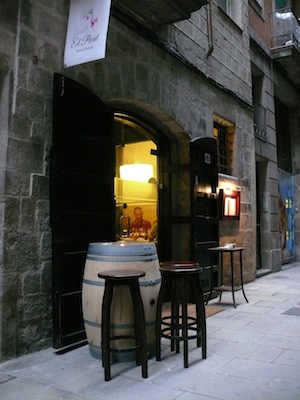 The slogan of new Barcelona restaurant El Pecat is ‘Art and Cuisine’; an honest motto that is upheld by reserved yet delicious food. El Pecat is sinfully good (hence the name; ‘The Sin’ in Catalan), with a passionate team of dynamic partners and a young chef who is poised to become the next big name. Having risen up through the ranks of the the world’s best restaurant (El Cellar de Can Roca) over the last five years, Javi Moreno now has the rare opportunity head his own kitchen for the first time, at the age of 22. Javi brought his best friend and fellow Can Roca veteran Daniel Delgado along with him as his righthand man; the two of them more than ecstatic to be building a menu together, from the ground up. A mere one month before El Pecat opened on August 1st, 2013, chefs Javi and Dani were working full time at Can Roca, waiting patiently for an opportunity at holding the reins to present itself; an opportunity that has now come.

“It’s a wonderful thing that they believe in what I can do,” says Javi. “This is our restaurant,” he says smiling. “This is our chance!” He goes on to tell me that one of the things that he realized while cooking in the kitchen of Joan Roca is that, while the discipline and technically demanding work of a three-Michelin star restaurant was an incredible experience, he yearned to return to the basics, to the Catalan food that he has known since childhood; food that is about simplistic preparation of pristine products, and flavor that satisfies to the core. Their vision of a neighborhood local where people eat like family; where the business is not just another occupied store front but a genuine part of the community, is slowly being realized. Introducing themselves personally to all the neighboring residents and businesses was just the first step. Having opened a restaurant previously, partner Oscar Olmas says that they are wisely bidding their time, waiting until their foundation is well-set before trying to the fill the dining room every night.

As of when I first went to El Pecat, the dining room itself was still a bit quiet and bare; a space with a lot of potential that still needs some serious breaking in. The musical tendency towards American classic rock might not be every diner’s cup of tea, but for me it was fun, and certainly kept with the young energy which the tiny, bustling kitchen exudes.

As with any new restaurant, timing and service are the hardest things to master and orchestrate, and though the chef may have felt the pressure of impending service when the kitchen and dining room were not 100% prepared (just one server was working the bar, as well as taking orders and running food), Chef Javi still had the grace and composure to personally visit each table, sincerely asking about the food and ensuring his guest’s full enjoyment of their meal. El Pecat is building their customer base from the ground up; hard work in this competitive market, but something that they seem to be well on their way to achieving.

“Angry clients don’t come back,” says Olmas. “Getting customers isn’t that hard, it’s getting them to come back (that is a challenge).” Therefore, El Pecat is training their staff and allowing the kitchen crew to find its stride before their ‘grand opening’ in late September. With a menu that constantly changes depending on freshness and availability, the kitchen is constantly kept on its toes, giving a driven young chef like Javi plenty of room to let his inspirations grow. The seafood is top-notch and constantly changing, thanks to one business partner’s second occupation: manager of a top fish-wholesaler at Barcelona’s sprawling Mercabarna market. Little known to those outside of the food-service industry (the market is not open to the public other than by previously-arranged tours), Mercabarna is by far the largest food market in Barcelona. When an excellent product gets on their radar, Chef Javi buys it up, offering an ever-changing rotation of nightly specials. 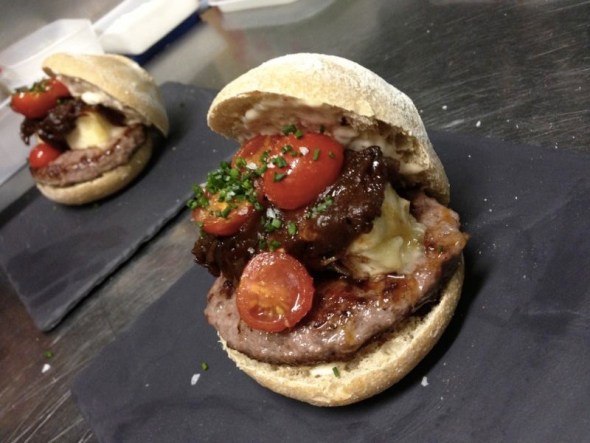 The market saw wonderfully plump, briny mussels this past week, so after buying a heaping sack of shiny black shells, the kitchen was charged with the duty of utilizing them to their full potential. Mussels must be kept alive to be cooked to order, so the chef’s solution to lots and lots of product: mussel in escabeche (briefly steamed then vinegar-marinated with spices, onions, peppers, and tomato). With a instantly extended shelf life, the mussels are served cleverly in aluminum tins, evoking the typical canned seafood of northern Spain, yet surprising the dinner with a complex, composed tapa within.

The star dishes at El Pecat lean heavily on the classics but bring their own unique touch to the table; a slow-cooked egg with potato and butifarra, ‘parmentier’ de pulpo (a rich puree of potato with tender octopus), cold cannelloni Bacalao pil pil (thick, gelatinous oil from the confit skin of salt cod with red pepper and black olives), sautéed baby squid in deeply-caramelized onions, rice with cuttlefish, and slow-roasted pork timbal with peach, apple, and beet—all of this at prices designed to compete with affordable options throughout the city. Eating here will not break the bank, though the prices are certainly a step above the far less thoughtful offerings in the local’s surrounding vicinity. With small dishes to share, as well as artfully-plated entrees, El Pecat could easily be the place for a Friday night date, or merely the spot for a weekday dinner with friends. The wine list is diverse and accessible, with 12 offerings by the glass and a trough at the front corner of the dining room where the bartender hurls each newly-pulled cork to bank sharply off the wall, slowly adding to the restaurant’s already surprising collection (for such a short amount of time in business).

All in all, El Pecat embodies simplicity and comfort, truly letting the ingredients shine and putting this young chef’s goal of creating a restaurant that is dedicated flavor over glamour in full swing. September brings El Pecat’s “grand opening”, and I look forward to seeing the restaurant continue to evolve, carving out a niche at the top of Barcelona’s authentic restaurant pantheon.

Sam is originally from Boston, MA. USA. He studied ecology and Spanish language during his undergraduate degree at Hampshire College (Amherst, MA). He then went on to train as a chef at the prestigious Culinary Institute of America (Hyde Park, NY) and earn an introductory certification from the Court of Master Sommeliers in 2013. He currently lives in Barcelona, Catalunya, Spain and works as a Community Manager and Content Creator for a Barcelona-based Social Media agency. He also is an active culinary tour operator specialized in historic gastronomy tours of Barcelona, and works as a freelance food/travel writer for several outlets. Find his Blog:  Zucker & Spice Travel. Follow his Barcelona lifestyle on Instagram: @saz444 and Snapchat: @sam_zucker