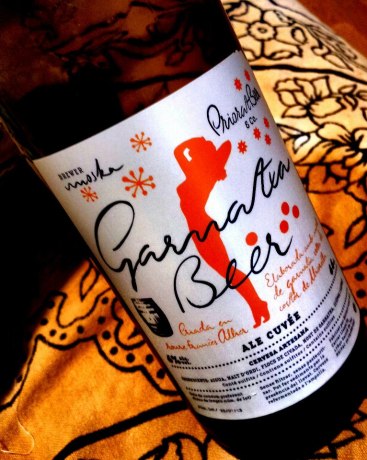 The names we give to our fermented friends are often misleading and do more to confuse than to clarify. People consistently tell me that I’m a beer person or a wine person, when in reality, you are making a pretty large generalization by lumping all liquids in one group. For instance, Sake, the “wine of Japan” is actually a beer. Some claim that calling it a beer is doing a diservice; though I would argue that by not acknowledging its roots, you are playing to class warfare. There is no shame in beer!

Wine is any fruit’s fermented liquid. We do make exceptions for apples and pears, classifying them at times as  cider  and perry, but at their most basic state, they are both wines. What I find fascinating is the crossroads of the fermentables. Ever heard of Mead? Wine made from honey? Well how about a mel-o-mel? Mead with the addition of fruit. Brackett? Mead with malt and hops.

Which brings me to the place where I think some of the most exciting flavors in the fermented world can, and often do, cross adventurous palates: the lambic. Defined as a beer that has fruit added; or to get geeky, a Gueuze (sour beer) with fruit added. It’s a world of flavors that never fail to amaze me.

A few weeks ago, I spoke of the “flavor revolution” occurring throughout Spain, but it wasn’t until recently that I truly saw old boundaries being pushed. Today, we bring you Garnatxa Beer, brewed by the Moska and stamped with the name “Priorat Beer & Co.” That’s right, someone got there Garnatxa in someone’s wort. Blending grapes with beer is by no means a new phenomenon, it’s been going on for centuries, but it’s fun to see people’s reactions to this relatively “new” liquid.

This is Moska’s first batch/vintage, and while I think it’s a good beer, it’s not yet stunning. The nose betrays the fruit, but the palate is more malt and hops with a bit of the fruit sneaking in at the end of the finish. Less sour than most beers in this style, there is still a bit of funkiness and light citrus which makes it finish refreshing and enticing. I can heartely recommend this treat, why not? At approximately 8 euros, it’s not the cheapest treat, but well worth spending the money to support new ideas, and to make sure they bring a second batch this year for us to try!

I applaude Moska for attempting this. And although, I’ve had a hit or miss experiences with their beers historically, I appreciate their efforts and will most definitely be looking for the next years batch as soon as it hits the shelves. At La Fira de Poble Nou Cervesas Artesanes I inquired what the producers  thought of the beer, and it appeared they were satisfied with the results, but they seemed to know they could do better. They didn’t claim it was a lambic in style, yet admitted it was in the lambic category. Overall, I want more acidity in a beer like this, but again, I’m happy.