Get Up And Crawl! – Best Spanish Tapas in New York 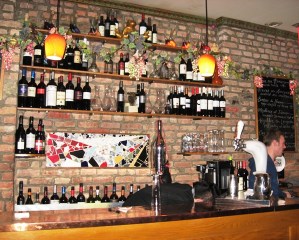 Nary has there been a person who has lived in Spain and not participated in a tapas crawl. This time honored tradition has all the makings of a night of gluttony and debauchery if not attempted correctly; but, hey, who cares if you eat and drink too much and get a little crazy?Â  You are in Spain!

Having participated in a few tapas crawls in my day during my time in the Motherland I was craving the feeling that one gets when sharing a bar counter with friends and strangers alike. Incredible food and drink coupled with conversations as varied as the individuals sharing them. At times, the food almost seems secondary to the company, but all have their place in the crawl. It was during times like this that I donned an iron stomach and consumed gastronomic delights familiar only to the likes of the Spanish palate. It was the recollections of vacations past that gave me the notion to recreate the same here; but where? There are only but a few (or so it seems) cities in the U.S. where I could attempt such a daunting task of recreating the tapas crawl experience. A birthday trip to New York City seemed the perfect opportunity. So, I hit the computer and went to work.

I was right. New York City boasts more Spanish restaurants and tapas bars than any other U.S. city (big surprise, huh?). The tough part was to balance out visiting quality bars without making this “crawl” a tour of New York City and its suburbs! Fortunately, there are number of tapas bars located inside the city and within a short subway ride and/or walking distance from our Midtown hotel. I had a plan (in part thanks to my new Spanish wine aficionado friend, Adrian Murcia). Now to see if it would work. Oh, the best laid plan¦

Many aspects of a traditional tapas crawl in Spain are lost when trying to recreate the experience in the U.S., but it was worth doing; and I would do it again in a heartbeat! Most tapas bars in Spain do not even open before 9:00 pm. It is a bit hard to do that here or you may just make it to a couple of stops. No problem – start earlier! In Spain you usually do not “order” your tapas; they appear from time to time and you partake as desired. Not the case here. Also, not a problem. Order “un especialidad de la casa” (specialty of the house) if they have one. Close enough. The key here is to enjoy the experience of spending time with friends, making new friends, and trying great food and wine.

The day had come and I was ready. I ate very little throughout the day to ensure sufficient room in my belly for the gastronomic treasures I was expecting to consume. Armed with my list of four tapas bars, a subway pass, and my NYC map on my iPhone we were readyâ€¦setâ€¦go!

We left our hotel around 5:00 pm and took the subway to Greenwich Village where we visited a quaint and very traditional little tapas bar, Las Ramblas. Here a toast with a glass of Juve y Camps Cava was in order, followed by a selection of olives, coliflor gratin (cauliflower gratin, and croquetas de jamón (ham croquettes). All were delicious and not a great start to what would become an unforgettable evening! Another short subway stop away (Chelsea) awaited or next destination, El Quinto Pino. Another small (and very traditional) tapas bar this restaurant was probably my least favorite of the four visited during the evening. Nonetheless, I had to sacrifice for the sake of the cause. We had a glass of red wine from Ribera Sacra (Pena de Lobo) along with some garbanzos fritos (fried chickpeas), gambas ajillo (shrimp and garlic), and a Gilda (a very common Basque pintxo of guindilla pepper, olive, and sardine). Fortunately, the rest of the evening was within walking distance. I’m not sure I would have wanted to figure out the NYC Metro after our next (and my favorite) stop. 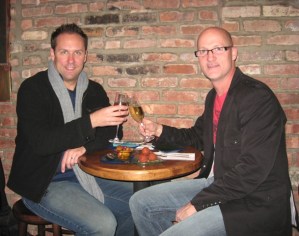 We arrived at Tia Pol (also in Chelsea) around 8:00 pm after a short walk and were lucky enough to grab the last available table in the place! I was planning on settling in here – a lot of good press preceded our visit. We were greeted by our server, Brett, who promptly gave us the rundown on the specials. We ordered a half bottle of 2000 Viña Todonia Reserva (Rioja) and I narrowed our choices to a couple of selections that I rarely see in the U.S. – navajas y almejas (razor clams and baby clams), pinchos morunos, and pimientos de estilo Guernika (shishito peppers cooked in a similar fashion to padrón peppers). Tia Pol did not disappoint. Each dish was perfectly prepared and tasted great! As we were preparing to leave Brett stopped us and treated us to a glass of 2008 Viña Sastre (Ribera del Duero) along with our “dessert” – a crostini with a bittersweet chocolate drizzled piece of chorizo on top. I could have ended the night here. Yeah, right!

Our final destination was a restaurant I had heard much about, Boqueria. It was obvious that everyone else had heard of it, too. It was packed! We were told a table would be ready in approximately 45 minutes. Fifteen minutes later they came to seat us – I chalk this up to good birthday Karma. I finished the evening as I had started it – with a glass of Cava (Poema). One of the specials here (and a must-have) I have never seen outside Spain – kokotxas (y pata negra). Kokotxas are actually the cheek of the hake fish (“merluza” in Spain). The dish was complemented with white beans and cured ham. We also ordered croquetas cremosas (mushroom and chicken croquettes). A fantastic way to end the perfect tapas crawl.

The effort in creating a NYC tapas crawl was well worth it – down to the last tasty morsel and drop of incredible Spanish wine. In actuality, it didn’t seem like much of an effort at all. Now I must begin to figure out which city will boast my next crawl – or maybe I’ll just fly back to Spain and make it easy on myself.