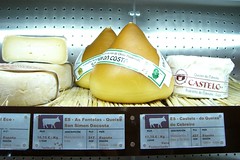 Two years ago, Food and Wine magazine talked of the revolution in Spanish artesian cheeses. After being outlawed for decades under Franco’s dictatorship, Spain has only recently been rediscovering and bringing back their artesian cheeses. Spain celebrates its regional cuisine, and if you ever comment on your plans to visit the Basque country, Leon, Galicia, Cordoba, etc., the Madrileños favorite advice is “Alla se come muy bien!” You eat well there, or as we would say, “The food there is great!” Food is almost more important in a Spaniards mind than the historic monuments they love, but are accustomed to. However, they would rarely, if ever, let sightseeing get in the way of a proper three-course lunch of the region’s specialties.

Today’s featured corner of Madrid is a wonderful artisan cheese shop that you can think of as Spain’s hidden corners and regional flavors brought directly to you. Our destination takes us to the northern reaches of 17th and 18th century Madrid to number 27 Calle Argansola. Here we find Poncelet, an excellent, award-winning shop specializing in artesian cheeses, as well as a selection of gourmet parings such as Spanish vinegar, wine and bread. Cheese, however, is their passion. Poncelet carries cheeses from nine different European countries, including: Italy, France, Belgium, Holland, the UK, Ireland, and of course, Spain. This small shop is a treasure trove of at least 90 different Spanish cheeses and 230 international cheeses, healthy number to explore! 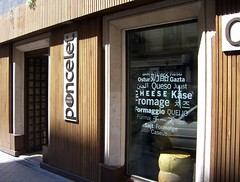 Poncelet is proud to offer Spanish cheeses that otherwise may be hard to find, even in Madrid. They have a special Roncal, which according to the attendant, is a difficult cheese for them to get because of transport issues. They also have many “black label” cheeses, which are limited production cheeses of very high quality.

One of my personal favorites is the smoked variety of Idiazabal cheese which has a D.O. all of its own and is made in the Basque country in northern Spain. But today, I decided to strike out, fight the temptation, and try something new for me. I chose to root for the underdog, and with some help from the expert staff at Poncelet, I selected a cheese without the official D.O. mark of authenticity.

I bought a small wedge of Queso Grazalema, named after the mountain range where it’s made in the village of Villaluenga del Rosario, slightly north of Cadiz in Andalucia. Made from pasteurized sheep’s milk, the cheese is aged 5 to 6 months and costs about 31 Euros a kilo. I loved this Grazalema cheese. As a result of being cured, it’s a hard cheese, yet retains an amazing creamy quality to it. Like a manchego, it’s a bit grainy with nutty flavors, yet slightly creamier. With the Iberian pig’s lard rubbed into the rind, I doubt this is a cheese readily imported to the US. Queso Grazalema has a strong pronounced flavor, nice acidity and light saltiness. My suggestion is to try this with a dry “fino” sherry from Jerez, which is produced nearby, and some country-style crusty bread. Another perfect pairing is to is to pour yourself a nice young red wine from La Mancha.

If you’re interested in tasting over 140 cheeses from 17 different regions, not to mention a wide range of wines by the glass from across Spain and abroad, take a stroll up the street to Poncelet Cheese Bar.