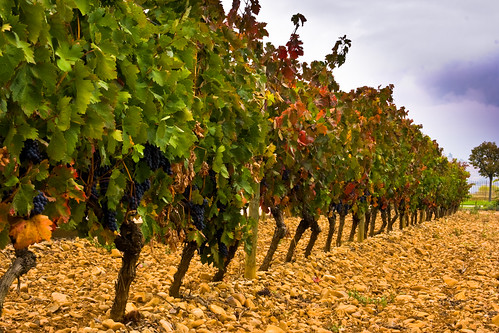 What is Mencia? It’s a grape on the rise right now in Spain, as a result of famous estates such as Dominio de Tares. Although, searching around the web will yield many results for information on this grape. So why do I find this grape to be worth taking note of? There are two main reasons why this grape deserves attention. One reason has to do with my recent interview with Spanish wine expert, Victor de la Serna, where he touts this grape as one of Spain’s four greatest red varieties”. The second reason is that recently, I was at a tasting of “new” Spanish wines, where I had a chance to try a young (2005) Mencia made by Carbonic Maceration. Now as I, stated before, I’m not the biggest fan of wines made in this way, but after tasting some 20 or so wines, I found that when done right, they can be more that “adult grape juice”. In particular, the wine I tasted made from Mencia turned out to be very interesting – showing more body that I usually expect from these wines.

So what is Mencia?

Well, according the The Oxford Companion to Wine, it is thought to be a direct relative of France‘s Cabernet Franc (Recent DNA test have proven this not to be true, though it is the same grape as Jaen in Portugal) which can be found as the primary grape in such heralded wines as Cheval Blanc. With parents like these you would think that there must be some greatness embedded within. Historically, winemakers have played the role of frustrated parents who try there best to access the potential they feel their offspring has within. All that came from their efforts were light red wines with light fruit and herbal notes – thus, regulating it to the place of “local” wine. You know… “good with the local foods”.

Fortunately, these winemakers have wised up, and with a bit of patience and new technology, they are finding that the “potential” was not that hard to access after all. Better crop management, temperature controlled fermentation and more experimentation with oak barrels have all led to exciting results. What has emerged are wines that can be powerful, while nuanced with red fruits and earthy richness. In fact, they tend to be some of the more interesting wines in my opinion landing on Spanish wine shelves.

Often the color will be a deep maroon, though I have found good examples that tend to be on the lighter side as well. Typical flavors are of earth, herbs (think mint, rosemary, thyme), dark fruits (raspberry, black cherry, blackberry) and I often find black pepper coming to the fore front as well.

As far as food pairings, I suggest roasted meats. Back home in Minnesota, many hunters are savoring fresh venison recently hunted, and I think that it might be a perfect pairing with this grape. Also, experiment with olives, dried meats, partridge and hard cheeses. Check out some more of my notes below on other wines I’ve tried made from Mencia.