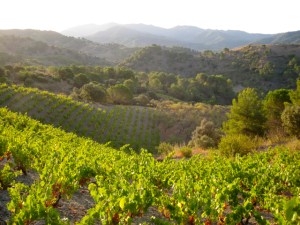 Editor’s Note: Have you ever wanted to work a grape harvest – picking, hauling and carrying grapes until your body feels like its been beaten by a 50 pound sandbag? Personally, I have, in part because I’m a sucker for manual labor, but also because I find farming to be a very grounding task. It takes the wine we buy in a store, bottled in sleek and attractive packaging, and brings it back to its essence. Manual harvests introduce humans back to nature, allowing us to smell the earth, feel its natural grittiness under our fingernails and taste a freshly plucked sweet grape from the vine. This process is far from clean, perfect or orderly, but it is life inspiring.

Recently, a friend of ours Raymond Magourty, was given the opportunity to work the harvest for a Mas Doix, a prestigious wine producer in the town of Poboleda, located in the Priorat. With his background in wine, and desire to learn more about about the Priorat, the winery took him on as an apprentice during the harvest. Hence over the next few months, Raymond will be chiming every now and then with his day to day experiences working a Cataluna harvest!  You can also read about his experience at the start of the harvest, visiting local winefestivals, and the uncommon debate of when to pick the grapes and barrel topping.

I’m originally from Wexford in south east Ireland and I foolishly took a career break from a well-paying secure job with a dynamic IT & Business consultancy in Dublin Ireland so that I could earn a pittance by slaving long hours in the process of learning more wine making. I’ve completed the WSET Diploma in Wines & Spirits, taught classes for the Wine Board of Ireland and consumed some very nice wines. I worked my last vintage with Limerick Lane in Sonoma County, California, a small quality producer renowned for their Zinfandels.

Today I bring you my accounts from the Priorat. And if you have any questions, or issues you want me to tackle, don’t hesitate to let me know.

Tuesday, September 8th
We started picking at 7.30am, as a result of the location and aspect, there is time before the sun hits the hillside where Mas Doix’ grows 50 year old Pedro Ximenez vines. The landscape is utterly beautiful and the hills on all sides are coated with a mix of vines, olive and almond trees. These hillsides are also home to large numbers of wild boar or ‘Jabali‘. Our parcel of PX is small and the crew of 9 hand-picked the lot in about 5 hours. We then transport everything back to the bodega/cellar and store in a cold room to preserve. The slopes are very steep varying between 40 and 60 degrees, but overall less ominous for pickers than some I’ve seen in Alsace or the Mosel. At the same time the soil is largely composed of broken slate which makes it very easy to lose grip and slip. The crop is lighter than last year but healthy and each picker is responsible for selection in the field – ie they have to pick out any dried, shrunken, unripe or damaged grapes by hand and ensure no leaves or MOG are included. The vineyard is 5 minute drive down a dirt track only suitable for a 4×4 or a tractor. We’re in a valley behind the village and as far as my eyes can see on all sides there is no trace of dwelling places, this is very very much the countryside. 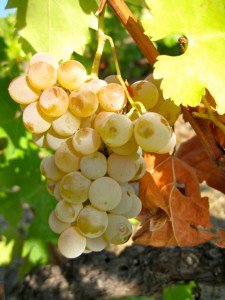 Today we pressed the Pedro Ximenez that we picked yesterday. As it’s a white grape variety there won’t be skin contact during fermentation so it’s a follow through process of crush & press. We did whole cluster crushing and pressing. The process starts with entire bunches being dropped into put into the crusher where the grape skins are quickly but gently and effectively ruptured. Though it sounds violent it’s not as the internal rollers are not in contact with one another as the key is to ensure that no stems are split or pips broken as these release unwanted astringent characteristics. Then the combined mix of juice, skins and stems is passed to the press. The press is quite small, in keeping with the scale of the operation, but new being Pneumatic.

Once the PX is put into the press the weight of the combined contents is sufficient to force the juice out through the tiny pores that line the press cylinder so much of the juice is extracted before the press is even switched on. It’s a fairly simple but effective mechanism, consisting of a giant rotating stainless steel cylinder which is sealed at both ends. It’s covered in small slits that allow juice to escape but nothing heavier or bigger so the stems, skins and pips are all held within the cylinder while the juice escapes by osmosis. Inside the cylinder there is basically a huge deflated rubber bag or bladder and once the press is in operation the bag is inflated to the required pressure to press the skins against the inner walls of the cylinder until the juice flows out. Depending on how much pressure one applies when inflating the bag the free-run juice is extracted. Like any quality wine making operation Mas Doix cuts the juice being produced at a certain pressure point and separates the juice released under low pressures, because the quality of expressed juice is inversely proportional to the amount of pressure applied. The latter fractions pressed out diminish in quality and are separated and rejected. From the press the must as its known is moved directly to tank where it is held in an inert environment so that there is no oxygen contact.

To view more of my photos, head over to my Flickr page.

If you have a question for Raymond, please don’t hesitate to ask them in the comments below.