How do you like your Iberian Whites? Fresh and Vibrant or Old and Wise? 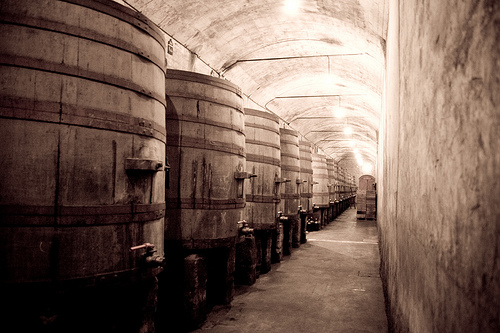 A few years ago, we visited a small wine shop hidden in the back roads of Lisbon. Having perused the bottles, we decided to enjoy a little wine tasting in the deli across the street, nibbling on a few stinky bits of cheese on the side. The waitress, who also worked in the wine shop across the street, asked us what we were interested in exploring beyond the traditional menu. Now, if you know us well, then you’re aware that we always ask for recommendations, preferring the more unusual and unique wines.

Having told her our thoughts, she responded with a tone of curiosity, “Ok, so do you like old Vinho Verde?” Whaaa? Huh? Hello? You mean that light fresh at times slightly effervescent wine from the north of Portugal, which is meant to be drunk young! But no, she meant old Vinho Verde. We drank wines going back 7 years, multiple lifetimes for Vinho Verde! Read about old Vinho Verdes here.

So why recant a story we wrote about back in 2007? Last month, I spoke with a Rias Baixes producer who argued that Albariño’s needed time to develop and mature. Having recently fallen in love with the 1989 White Rioja from Viña Tondonia, made with Viura, I could see her logic. If a white wine made from a grape as plain jane as Viura could elaborate drop dead killer wines, I could conceivably imagine that Albariño, with its intense acidity and expressive bouquet, could easily craft a similar wine.

Having tasted old Loureiro, Alvarinho, and Trexeidura in Portugal, I wants to believe, but to date, I have yet to taste an old Albariño from Spain. However, I did place a few bottles in our cellar to age, a trying a long process for someone who’s dying to dip into the bottle today.

A recent discussion at Jancis’s Purple pages, reminded me that I need to explore more aged whites out there (subscribers can read it here). Victor de la Serna, perhaps the most knowledgeable individual in the world about Spanish wine, argues that while it’s rare to see a wine age for more than a decade with success, there are examples. He claims that the “1999 Pazo de Señorans Selección de Añada is singing right now.” A wine that is definitely on our wish list!

When I lived in the states, my geek friends and I would talk about wines we had bought for the future such as a Bordeaux, an old Sauterne or a Chablis. The process of convincing my crew to experiment with aged Spanish wines wouldn’t be difficult, but this isn’t the case for the broader public. Old wine is a treat for the privileged few, something that the average wine buyer rarely gets to experience. Spain honors the tradition of releasing wines at the time of drinking; hence you can find old Rioja that is new to the market. I believe the current vintage of Viña Tondonia’s white wine is 1991, and they are about to release the 2000 red. This is wonderful, and if you look at the prices, also quite affordable. 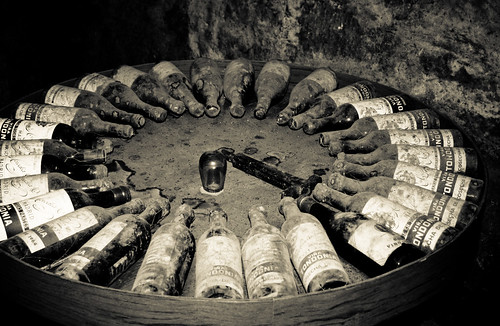 But times have changed, and we lack patience for aging wine. Our impulsive, quick to satiate nature has also brushed aside varying flavors in the glass, history, lineage and storytelling. Savvy wine retailers who are not struggling to keep the doors open may be able to help, but the idea of buying a wine to store for 4, 5, 6 years before selling is not an all together desirable idea in the current economic climate. Personally, I suggest buying an extra bottle of something white the next time you choose a party wine! Throw it in the basement cellar, or behind the clothes in your closet, and try to forget about it. Maybe set a reminder to yourself (here’s one cool way to do that) to excavate the lonely bottle from a pile of shoes you’ve been meaning to donate to the second hand clothes store.

This debate about aging whites reminds me of my Grandma. She loves candy canes, vintage candy canes that is. She even has a candy cane cellar, believing that they’re not “ripe” or ready for consumption until the sugars have broken down sufficiently. She enjoys her canes slightly chewy, while still retaining its candy cane zest! Ironically, I see her point, but not everyone does. So now back to wine.

Why lay a wine down? In whites that age well, you often find a lovely cream and caramel nose. Think fruits that are dried, or baked, until the sugars begin to caramelize. In the best whites, you’ll often find a mustiness, like an attic full of old leather bound books, rich and layered in history. However, I also like the fresh zippiness of a new wine that’s barely spent time in the bottle, full of fresh fruit, flowers and acidity. Both are appealing depending on what you’re attracted to!

If you haven’t had an old white, you might not know if it’s worth it until you try it, but you will never know if you don’t take the chance. So go to your local wine market, look for a white with a full body, high acidity and/or sugars. Buy 3 or 4 bottles and lay them down. Now wrap a piece of paper around the first one with a rubber band. When you open it in a year, write your impressions down on the paper, and put it around the next bottle. Next year, repeat. Buy the end of your stash of bottles, you’ll know what has changed or hasn’t.

It’s fun, it’s simple, and it’s something you might not have done otherwise. Let us know if you try it!