Yesterday, a good friend asked for some suggestions on cheese and Spanish wine selections for a party by email. Specifically, he wanted a handful of wines and cheeses that he could find in and around Minnesota. Not having a clue as to what is currently available in the Minnesota market, I thought it would be interesting to get the responses of a few of our writers and friends on what they thought were good choices. I’m glad I did. The following are a few quotes in response to this email:

…What he wants is to go pick up some Spanish wines, and find some cheeses that we would suggest to pair with them. So I thought it might be good to ask our writers, and friends for a few of their favorites…

Wines – Spanish but stick with region/grape/style rather than producer
Cheeses – Looking for general ones, though if there is a particular favorite, let us know. Best though we stick with “strong blues” or “hard Parmesans” etc…

The Payoyo cheeses from Villalengua del Rosario are probably the best known example but there are many others like the Gazul cheeses from Alcala de los Gazules.

Payoya is a breed of goat by the way as in la raza Payoya. Malagueña goats are similar and make similar cheeses. 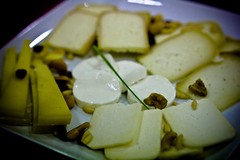 OK, I love this question because I am a cheese fanatic. You won’t believe it but only yesterday I flew to Amsterdam specifically to buy cheese at De Kaaskamer, one of Europe’s finest cheese shops. You’re talking to a cheese Taliban here.

Recently I came to the conclusion – deep breath here – that most table wine DOES NOT go well with cheese. I think it is a fallacy to mix wine and cheese indiscriminately. Even the idea of red wine and cheese is based on a complete mistake, and is inexplicably persistent. I learnt this at a seminar with Neal’s Yard tutors. There are good scientific reasons for this, to do with the way the chemical compounds react when combined. Tannin and salt do not go well at all, producing a terrible effect on the palate, so red wines and blue cheeses are a disaster, as are red wines with cheeses high in salt crystal content (such as old manchego). In fact red wines with any cheese, full-stop.
However, those of us who love both things are always seeking solutions to this problem. I offer the following thought:
Just a few random thoughts.
Have a good hot weekend!!
Ricard 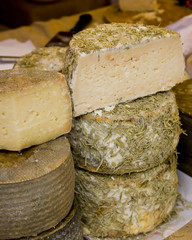 I also am a cheese lover, though not perhaps in Ricard’s class – what a fantastic email from him. He is not alone in his take on wine and cheese. Michael Broadbent writes on p. 12 of my copy of his “Wine Tasting: New and Revised Edition, 2003” (Mitchell Beazley), “There are two conventions I like to overturn: red and wine and cheese, sweet wines with desserts. Unless the cheese is mild and the red wine is reasonably robust and not of fine quality the cheese spoils the taste of the wine. At all costs avoid pairing good qulaity red wine, burgundy in particular, with a fancy restaurants’s “sélection des fromagges…” I am less sophisticated and am happy to give it a go. Indeed, I all too often opt for the sélection des fromages as an excuse to finish the bottle of wine I’ve been drinking rather move on to pudding.

While deferring to Ricard on all counts, if Sauternes and Roquefort cheese are a classic combination, might it not be fun to try a classy sweet white with Cabrales?

I am devoted to Lancashire cheese (crumbly preferred) as a result of a few years living in Manchester a long time ago. This cheese’s acidity marries surprisingly well with champagne, in my view, and I’d be interested in trying it with Cava.

I was recently at an artisanal fair and was really impressed by the cheeses from Quesería Los Corrales in Castellón. This area has no particular cheese tradition (apart from the not very interesting Tronchón), but these people are bringing a lot of love to the process and are convinced that they are achieving distinc “terroir” characteristics from the wild herbs on the surrounding hills. I bought their whole range of cheeses after sampling at the fair, but unfortunately never got round to matching them with wines, as my dog sniffed them out, pushed the covered tray where I’d left them onto the floor and scoffed the lot – to my mind a far worse crime than the shoes and various other possessions he normally eats.

Again, I’m almost embarrassed to admit that I have been known to enthuse about white Rioja or Viura in general with Manchego, aged Rioja with Wensleydale (apologies also to Wallace and Grommit), Ribera del Duero crianza or resrvawith Brie, and Rioja and Ribera del Duero reservas with Pont L’Evêque. 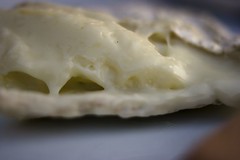 We are fanatic’s about cheese though like a good block of swiss, our memory is full of holes when the names come into play. That said, we do enjoy almost all cheeses, from the stinkiest to the most delicate and ethereal. We also understand the world of pairing well, and even have some strong thoughts on the subject, but for now we’ll end this post with a small bit of advice for our friend.

For the perfect cheese and wine pairing evening do the following:

BTW this post made me dig up some old articles on Catavino that all cheese lovers must not miss!