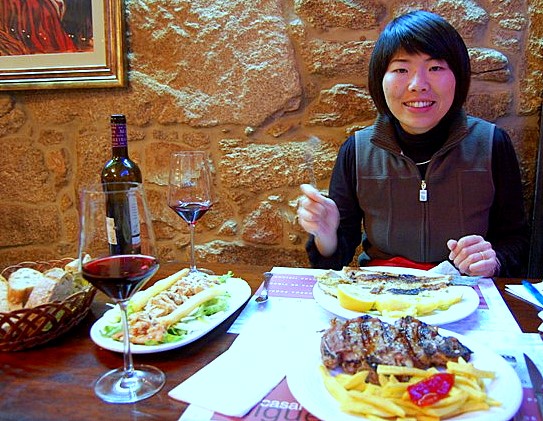 Last September, Ryan and I helped judge the “Best Catalan Wine Blog Competition” for D.O. Catalunya, where we met the Japanese wine blogger, Yuko Satake (check out this article on our take of blog competitions here). Yuko, a petite, spunky and enthusiastic woman in her mid thirties, authors Vino Nos Habla (Wine We Talk About) – a blog written in Japanese about Spanish wine. She was awarded an Honorable Mention at the D.O. Catalunya Blog Awards for being the only Japanese wine blogger located in Catalunya writing about Spanish wines for a Japanese market.

Having met her only briefly at the awards ceremony to congratulate her on her site, I was excited last Friday night to have had the opportunity to meet up for a drink at La Vinya del Senyor – a tiny wine bar in the gothic district of Barcelona. But to be honest, I had no intention of interviewing her. My goal was simply to talk about ways in which we could potentially collaborate our efforts. But 2 minutes into our meeting, her vibrant personality and addictive passion to educate the Japanese wine drinking public, as to the numerous quality Spanish wines available, was intoxicating. How could I not share this woman’s passion with you? Clearly, I just couldn’t pass up on the opportunity.

Yuko’s history dates back almost a decade ago, when she was a tour guide in Japan, but found her limited language abilities in both Japanese and English thwarting her potential. So in 2001, she came to Barcelona and registered herself in a Spanish language course. But as love tends to do, it snuck up on her, influencing a casual roommate situation to turn into a full on relationship. With the celebration of marriage, Yuko settled in Barcelona and began working for a small company that buys juice from surrounding wineries to craft into their own private label. Although not her dream job, it has afforded her the vocabulary, time and knowledge to embark on her own wine related adventures through her blog.

“Originally, I had intended to just write for my friends and family. But when I received the award from D.O. Catalunya has a foreigner writing in Japanese, I suddenly felt as if my blog meant something more.”

What’s interesting to note here is that Yuko did not grow up with wine. She grew up with Sake and Japanese beer in her family. But after moving to Spain, her curiosity and passion for wine grew at a rapid pace, until she found herself visiting wineries, taking wine courses when available, and eventually, wanting to share this addiction with others. 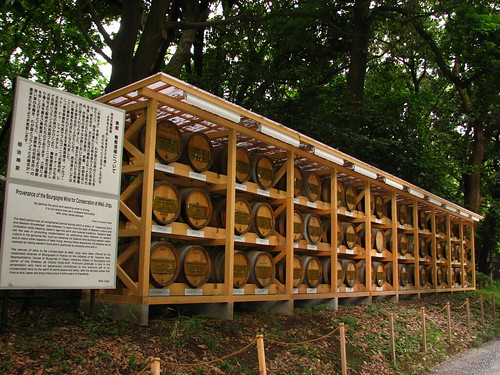 “What’s difficult is that there are lots of Spanish wines from all across Spain in Japan, but they are all sold through Internet wine shops. And although our Internet culture is growing rapidly, Spanish wine is still only occupying approximately 3% of the market. Where people have more contact with wine, such as local wine shops or restaurants, carry very little Spanish wine from only a few places like Cava from Catalunya, Rioja and Ribera del Duero. French wine is popular, but that’s because the French pay attention to us. But there is a market in Japan for Spanish wine.”

My sense is that Yuko wants to change this, and through her second website (coming out soon) will be aimed at Spanish enotourism exclusively for Japanese. “In the past 10 years, as local Japanese wine has increased in quality, more people are visiting wineries, and I think this can translate here in Spain as well.” (Flickr photo by POHAN)

Personally, I think Yuko has an uphill battle in front of her. With her bubblyÂ  personality, and desire to learn every fact and figure about Spanish wine, she will be a wonderful addition to the industry, but I don’t have the same confidence in wineries she wants to visit. Wineries are still struggling with tourism here in Spain, consistently finding it difficult to focus on the customer, rather than their own needs. However, with conferences like Wine Pleasures, and people like Jimmy Pons, I have confidence that with a little patience and a lot of persistence, this will eventually change.

When asked what good enoturism means to her, she responded, “The vines. A winery’s celler is the same around the world. There may be some differences, but by the end of the day, what I truly care about is your vineyard. How the vines are grown, how the soil is managed, what varieties are cultivated, etc. This is what I care about, and this is what I want provided to my guests. Additionally, the people and the ambiance of the winery itself. Good enoturism should show a positive and passionate ambiance where people want to share their knowledge and their wines.”

What excited me about meeting Yuko, was her desire to improve the way in which she connected with both Spanish wineries and the Japanese market. Knowing very little about Social Media, our conversation quickly became absorbed in dissecting terms like RSS, micro-blogging and social networking. Despite the fact that she had a blog, I don’t think she understood the potential of the tool she had in her hand. And by the time she left the conversation, her face expressed a sense of both excitement and shock.Â  “Maybe with Social Media I can help Spanish wineries communicate with the Japanese?”

We hope so Yuko. We truly hope so!