Interview with Mark Squires: The Future of Portuguese Wine 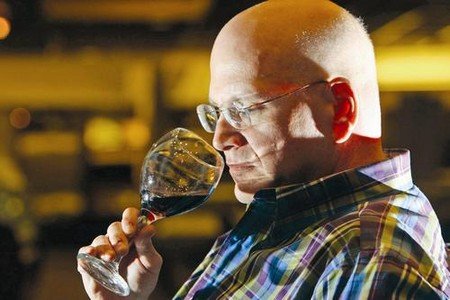 When I first became interested in wine, I actively sought out places where I could talk and ask questions. Way back then, eRobertParker had recently joined with the Mark Squires wine bulletin board to create a space for wine geeks to chat online, eventually create “offlines” . Offlines were scheduled meet ups with local bulletin board members in a set physical location.

I had a few exchanges with Mark Squires back then, but I didn’t know him well, nor was he in charge of any regions for the Wine Advocate yet. Today, that has all changed. Mark is now the man in charge of bestowing points for wines in Portugal, Greece, much of the Middle East (Israel, Lebanon) and others (Bulgaria, Romania, Serbia, Republic of Macedonia, Cyprus) – not to mention, much of the East Coast, USA.

This past month, I stole a little time with Mark at the Michelin star restaurant, Pedro Lemos, while he was researching wines for the Wine Advocate. It was a fun dinner with a host of wines that we all agreed were treats. I’ll be doing a short write up on that later, but for now, Mark was kind enough to answer a few questions about Portuguese wines for Catavino! Hope you enjoy.

Tell us how you become completely obsessed with wine?

My story is actually a lot like Robert Parker’s. As a young lawyer, I had an affinity for France and my first Euro vacation included France. I went to a lot of great restaurants. The sommeliers looked at me expectantly regarding wine orders, so I had some. It was a revelation. I really liked it! I wanted more. I came home possessed! With an anal-compulsive mentality, I plunged in and became obsessive, making lots of wine region trips, buying increasingly expensive wines (including things I couldn’t really afford) and so on. I was hooked.

Somewhere around the mid-90s, I became interested in Portuguese wines, in part because I thought it was something I could focus on that no one was paying much attention to. So, I founded my own website, which would today be called a blog, because I wanted a “hook”. One of the main issues of running a website, while maintaining a full time law practice, was a LACK OF TIME! I just didn’t have it to source out gems, so I gave up. About a decade later, Bob asked me to cover Portugal [for eRobertParker.com] which fit right in with some interests I had.

What have been the most dramatic changes in Portuguese wine since you first covered them?

That’s easy: more quality, more consistency and way better whites. And the focus is not just on Port any more. When I look back on some of the early reds I saw, there were some nice things coming in the early 2000s, but not as many; and many prestige wines didn’t perform as well. That’s no longer the case. Then…there’s the whites. Expect a lot of mid-90s scores for top whites. I recently gave that to Conceito, to Anselmo Mendes Parcela Unica….
Portugal and white wine is no longer a minor issue.

What Portuguese regions deserve more credit or have yet to reach their full potential?

That’s easy, too. While you can point to Bairrada, Vinho Verde and Dão as regions that need more work, that’s not the problem. They are on the right track. They are making great wines. There are more and more great producers; but regions like Tejo, Setubal, Lisboa…they need some work or they are going to become afterthoughts. They need to achieve critical mass. They don’t have enough top producers or top wines. They can do better! Let’s get cracking! Other regions–like Algarve–are still getting themselves together. That should be interesting.

What producers do you consider the icons of Portuguese wines? Who are the “first growths” of Portugal in your opinion?

First growths? Are you trying to make sure I don’t make my August deadlines!? That’s interesting. I may write an article. You may have to subscribe. 🙂 But seriously, that requires a lot of thought and weighing a lot of different factors. It is a very complicated answer I can’t even begin to address in a few sentences. To some extent, it is changing by the minute. Regarding the aforementioned Branco issue, for instance, suddenly the criteria have changed. Yes, I DO want to see you make good whites, too.

What is Portugal’s biggest strength in the international wine market?

I’d say two things: there is an identity with the indigenous grapes and very good pricing, in general.

What do you think the future holds for the Portuguese wine market outside of Portugal?

Here is the biggest problem for Portugal. Outside of Port, it has very little identity in the USA. That’s important because the USA is a critical market. It is a huge, wealthy and growing (in wine consumption), unlike most of the West. Every Portuguese producer should be devoting all the time and effort they have to making sure they have good importers in the USA. This is simply critical. NOTHING is more important. When the Portuguese have asked me what they should do to attack the market, my answer is “stay the course.” Keep your identity. In other words, make Baga, Touriga Nacional, Encruzado and Alicante Bouschet. The Southern regions, that are more likely to have Chardonnay, Syrah and what not–they are making good wines, but they are going to have to be even more exceptional and/or compete on price. In the long run, their path may be harder. I see people who didn’t want to talk about Portugal 10 years ago that are now interested. They may not know much, or be entirely convinced, but they are interested. That’s an important step.

How can Portugal better communicate the ability for their wines to age? Do you think that Portugal can ever become a staple outside of Port Wine in the great wine cellars of this world?

Of course. It’s not easy becoming an icon, but gosh, Portugal is a seriously good wine country. Wines from Douro and what not are better than so many regions that get so much more attention in the USA. And the prices are better, too, as a rule. The simple answer is that every step forward and every success leads to the next….

I hope you enjoyed this short interview. If there is someone who you would like us to interview, let us know and we’ll see if we can get them! Always good to hear more perspectives.