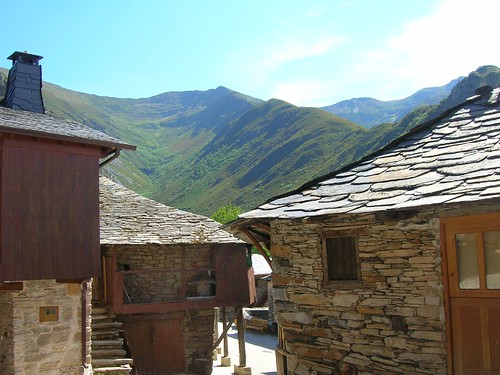 The end of May’s Virtual Wine Tasting of the Albariño varietal ended yesterday with some fantastic contributions from both people who have been commenting quite regularly like Richard, Bill, Sonadora and Dr. Debs to newcomers like Huevosconvino and John. To all of you who are participating, Ryan and I would like to throw out a big Thank You and hope you will continue tasting with us in June. And speaking of June’s Virtual Wine Tasting, we have chosen the region of DO Bierzo.

Therefore, if you all will be heading out to your favorite wine shop to look for some Bierzo wines, you may want to know a thing or two about the region. Although the Denominacion de Origen is Bierzo, the region is called, El Bierzo, located in northwest of Spain in Castilla y Leon. Bierzo could be considered the black sheep of Castilla in that it is situated in the province of Leon but it lies quite north of the main famous winemaking area of the Duero Valley, while its western border is adjacent to the eastern boundary of Galicia’s Valdeorras DO. (Flickr photo by FreeCat)

Historically considered under the Kingdom of Galicia and later the Kingdom of Leon, El Bierzo was a province of the Kingdom of Castile from 1591 until 1789. For a brief while, Bierzo tried with all its might to break free of authoritative rule by asserting its independence and becoming its own providence from 1821 to 1823, the region was finally merged into the province of Leon in 1833. Why should you care about this little historical tidbit? This is important simply because Bierzo is considered a bit of a mutt. Like Catalunya, El Bierzo slowly integrated both its Galician and Leonese traditions under the influence of Castilla, eventually being granted the administrative status of comarca, or subdivision, of Castilla y Leon. Therefore, it is of no surprise that as a result of both its location and cultural complexity, Bierzo’s wines are said to fall somewhere between the light, fruity and slightly minerally style of Galicia and the heavy rich wines of the Duero.

Geographically, I’ve read that this area is a knockout for some beautiful scenery. As some of you may have noticed in one of our previous posts, we will be heading to Galicia in September for both a wedding a wine tour through the region, making me incredibly excited to taste anything that resembles a Galician wine at the moment. From what I’ve read on tourism websites for this region, Bierzo, is the home of some impressive highland scenery, beginning with the ravines of the river Sil, a tributary of the Miño (the Minho in Portugal), and heading southwards to the mountains of the Sierra de la Cabrera. In reality, this area is shaped like a big hollow bowl completely surrounded by mountains with the Cordillera Cantabrica to the west and north; to the south, the Sierra de Cabrera; and to the east, the Montes de Leon.

DO Bierzo permits the following grape varietals in their region as described on their website:

For this months Virtual Wine Tasting, Ive compiled a list of Bodegas that you might want to check out. Although the majority of these bodegas can be found throughout the US and the UK, you may need to do a little detective work in your neighborhood. The leading bodegas include: Vinedos y Bodegas Dominio de Tares, Estafania, Bodegas y Vinedos Luna Beberide, Perez Carames, Bodegas Prada a Tope, Bodegas Peique, Sociedad Coooperativa Vinos del Bierzo, and Descendientes de J. Palacios for which I am unable to find a website. If you come across anything that resembles a website for them, please let us know so that I may contact them.

We’ve sent out emails to all the recommended bodegas above telling them about our tasting in hopes of getting their participation in the event. Let’s all cross our fingers that word will get out and we can get some additional unsolicited voices from other bodegas or distributors of DO Bierzo telling us about their wines!

We’d also love to know how many people have tasted any wine from DO Bierzo and what you’ve thought about it. While doing a little research for this post, I came across a few wine writers who boast of Mencia’s greatness and of Garnacha Tintorera’s lack of luster in making good wines. We’ve had fabulous experiences with the grape, but I’d be curious to see what experiences people have had or if you’ve even come across a Garnacha Tintorera wine in the past. An additional question may be as to whether you’re familiar with Palomino’s entrance into the region? It’s traveled quite a distance to get were it is in the north of Spain from its native southern home of Jerez. Is anyone familiar the battle between Palomino and Godello?

Ryan and I look forward to a great month of tasting ahead!