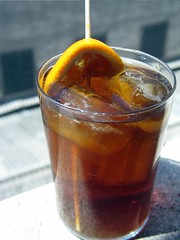 Madrid is hot. Iberia is hot. Europe is HOT! Sitting still you are bound to float away in a puddle of your own sweat if your not careful. I’ve told you before that the heat is a constant source of conversation here in Madrid. You can walk into about any bar and find people chatting about the heat like the mere fact of acknowledging it might lead it to move on to another location. Typical bar exchange when I stop in for a drink usually goes like this:

Day after day this conversation plays out at bar after bar in the streets of Madrid, and it’s these Spaniards who decide that while it may be to hot for a robust red wine, they aren’t going to let the heat stop them from drinking. Alcohol dehydrates the body and makes one quickly dizzy in the sun. So today, I want to talk about some of the drinks you’ll see people sipping on the sidewalks of Madrid that won’t necessarily knock you out as you chat the afternoon away.

Come to Spain try the Sangria. This is the mantra of the most tourist type places in the center of Madrid have and they are also one of the only places you’ll find this beverage, and in great numbers. Although Sangria – a beverage containing fruit juice, brandy and wine – is associated with Spain, it’s really the tourists who are responsible for its fame. Additionally, it is an alcohol bomb. Usually stronger than wine, thanks to an addition of brandy, it is not the best tonic on a hot afternoon in the sun. On the other hand, vacationing tourists tend to appreciate a buzz to help wind down when away from home. So now I will leave Sangria and move on to the other drinks that show up on the native Spanish beverage landscape.

Kalimotxo – I found a site that takes this Spanish wine beverage a bit too seriously. Basically, it’s Coca-cola and red wine blended fifty-fifty, typically without ice. Simple, sweet and in all honesty, foreign to me. I just don’t like soda/coke/pop enough to try this. But I bet if you could patent the mix, you would be a millionaire because it is one of the most drunk alcohol beverages in Spain. I’ll leave it to you to decide if you want to try it. Drunk in Basque country it is their “Sangria” and is most oftern the first beverage that a young basque will learn the problems of over indulgence with!

Variation: Pitilingorri – Made with Sprite instead of Coke and is Basque for “a little bit red”
.
Tinto de Verano – I call this a “spritzer” but they call it the “red wine of summer”. It’s a mix of red wine (sometimes white) and Casera, a sweet soda water with a hint of citrus. Here’s a good recipe for this Spanish wine drink. A bit too sweet for me but we’re heading in the right direction. I can see how this could be refreshing, though I think I would prefer using soda water instead.

Tawny and Tonic – Here we move to the other side of the Peninsula to the home of Port wine – Portugal. When Gabriella and I were there a few years ago, we learned of this drink and admit to developing a taste for it. Take a good jigger or two of tawny port and pour it over ice. Afterwards, top it off with tonic water and you have it. It’s tasty with a slight bitterness to balance the sweet port.

Rebujito – Found this from an online search. Rebujito is a mix of Manzanilla sherry, ice and 7up. I guess I could see this one working out, but I haven’t had it yet. Maybe a taste test is in order. If I had to guess, from my experience here you most likely will only see this in bars in the south of Spain.

Zurracapote – OK here’s another one I had never heard about until Google told me it existed. Take the legendary Sangria but make it with lemon, sugar and cinnamon (without the brandy). Drank in the Navarra region of Spain and in La Rioja, it is another way to lower the alcohol but not the flavor.

In the end, I’m sure there are many more. Once I get to Catalyuna, I’m sure I’ll figure out the local Cava based version (maybe someone can send me a recipe to add to the list). The main thing these all have in common for the most part is a way to lower the alcohol level in the wine. In this intense heat, the alcohol can hurt you and leave you pretty dehydrated. And although I drink about a water tanker full of water every hour, it is nice to have a change from time to time and something a little sweet.

As for Gabriella and I, well we’ve come to our own mix that seems to fit the bill. Following our love of Vermouth, we’ve crafted a Spritzer of sorts that fits the bill at the end of the day as we wind down.

One glass full of ice
Squeeze one wedge of orange into it and throw in the orange
Fill 1/3 full of Red Vermouth (quality does matter here, I was surprised too!)
Top off with soda water and stir!

BTW purists out there who say wine shouldn’t be mixed with anything and that this whole article is sacrilege need to lighten up. Wine is a beverage to be enjoyed. Not to mention if your using your good wines to make any of the above beverages, shame on you. Cheap is good and life is short! Enjoy!

Footnote: Just got back from the grocery store and I grabbed some Grapefruits. Turns out they are great in Gab and I’s “spritzer”, adding a little less sweetness and keeping the citrus touch. Quite nice.