Kosher Wine in Spain: The Spirituality of Wine in Montsant 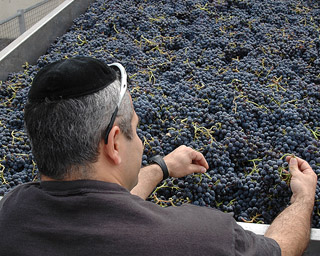 If you’re looking for a Kosher wine and food tour, contact us today!

Last week, while visiting the Capçanes winery in Montsant, we visited the very first winery in Spain to produce a Kosher wine in the 20th century. Mind you, Kosher wine has been in existence since 636 AD in Israel, and may have been in Spain prior to Capçanes innovative spirit. The history of Judaism in Spain dates back to Roman times, while some research even suggests that they may have inhabited the country earlier than the 3rd century. And what you may not know is that Spanish Jews were one of the largest Jewish communities worldwide, living peacefully under both Muslim and Christian rule until that fateful year 1492 when Isabel and Ferdinand expelled them during the inquisition. Currently, there are approximately 40,000 Jews living in Spain, and of that very healthy percentage, there is clearly a strong contingent of wine aficionados. (Photo from ICEX)

Capçanes dates back to the 19th century and was one of the many victims of phylloxera in Spain. Wiped out and under resourced, it wasn’t until 1933 when 5 families joined forces to create the cooperative of Capçanes. Over the years, they grew at a steady pace, but it wasn’t until 1995 when a Jewish family from Barcelona requested that they make the first Kosher wine in Spain that times truly changed for Capçanes. As taken from their website, “This demanded the installation of new equipment allowing the winemakers to identify, isolate and vinify under controlled “Lo Mebushal” conditions, small parcels of quality fruit.” Consequently, the Peraj Ha’abib (Flor de Primavera or Spring Flower) was the wine that placed Capçanes on the map worldwide.

What is Kosher Wine?

To answer this question I consulted a book given us by Richard Shaffer (Catavino’s Israeli wine guru) called, “Rogov’s Guide to Israeli Wines 2007” by Daniel Rogov. Rogov is considered Israel’s pre-eminent wine critic and was kind enough to provide us with the 7 requirements that must be followed in order to produce a Kosher wine. As taken from his book:

As explained by Inka Jechova, the winery guide, on strictly a winemaking level a Kosher wine proves to be a challenge to any winemaker. The winemaker may not have any contact with his wine other than through the Rabbi. Which means, that if the winemaker at Capçanes wants to check on his wine, he must ask the Rabbi to come in from Barcelona and take out a sample for him to both see and taste.

On a very personal, I found the process fascinating and had wished the Rabbi was there so that I could ask him a few questions. I wanted to understand every detail of the winemaking process from start to finish. Does the winemaker give him a list of instructions? How many Sabbath-observant Jews decide to become full fledged winemakers? Is language an issue both on a very practical level, but also on a technical level?

Currently, there are Kosher wines being made in DO Penedés (cava), Rioja, Priorat, Yecla, Montsant, Tarragona, Alella and Ribera del Duero. If you’re interested in getting more information on Kosher wine, you can head over to the Kosher Wine Society.

As to the 2006 Peraj Ha’abib (not 2005 as indicated on the adjacent photo), it is made with 35% Cabernet Sauvignon, 35% Garnatxa Negra and 30% Samsó and aged for 12 months in new and one year old, mainly (honestly not sure what “mainly” means, because I didn’t think you could use a barrel that wasn’t Kosher, but that is what I was told) Kosher French oak barrels. Overall, we both enjoyed this wine immensely, but it is a monster wine that needs to develop. The wine is incredibly dark in color with a fabulous black cherry, chocolate and floral nose. In the mouth, the Peraj Ha’abib showed medium fine tannins, fresh acidity and a round mouthfeel, ebbing to a long, lush dark spice and red fruit finish. Definitely a fun wine, and worthy accolades, but as mentioned, lay this bottle for awhile before popping the cork.

Keep in mind that

This tour is half way between a walking holiday and gourmet break as we bring you the very best...