Crazy, seriously crazy. I never, in a million years, would have expected to find what we found last Tuesday afternoon when meeting a winery rep for lunch while we evangelized Social Media and tasted some new wines. Our contact from the winery sent us an address, and I remember opening it in Google maps and swearing that couldn’t be the place he meant to say. I had to confirm twice, since it happened to be a small deli where we used to have coffee with friends, located just around the corner from their old apartment in Gracia. Nice enough place, but for lunch?!

Anyways, we arrived early, and as we are often prone to do, we both ordered a nice glass of Cava. The Oriel Brut is a crisp, yet creamy, treat that perfectly accompanied our wait.

La Xarcu is located literally in the middle of the Sant Gervasi construction zone, thus making its terrace loud and grimy. Before the digging started, we used to sit, with a coffee in hand, and enjoy the cool shade of a trees. Now, as jack hammers pound pavement, we’re dreaming of the construction coming to a quick halt, allowing for our quiet terrace moment to return.

When our friend arrived, we quickly moved inside to open a few bottles of wine and chat about social media. The interior entrance actually reminds me of a cafeteria with nicer woodwork, but nothing to write home about. So we ended up choosing a table upstairs and dove right into the menu. Being that is was the lunch hour, 2pm,Â we checked out the “menu del dia” portion of the list and noticed two choices, one at 15euros and another at 25euros. In Spain, this typically means that for 15euros, you get a first plate, second plate, a beverage (wine, beer, soda), and maybe a dessert and coffee. The last two vary from place to place, but in the end, the menu is always the way to go.

So why am I rambling like this? Well, I wanted to set the mood. The place is plain, the location solitary from other culinary gems, and the menu, with some interesting sounding items, not really that much different from others I’ve seen. So that’s why I was FLOORED when the first amuse bouche came to the table.

Yes, I did say: pig’s feet stuffed with oysters, and not only did my non-pig-parts loving wife, love this, but I seriously will put this 2 bite treat down as one of the most exciting things I’ve eaten in the past year. Seriously, this was insanely good, a small medallion of melt in your mouth pig’s trotter wrapped around 2-3 little oyster nuggets. Even writing this I realize how unappealing that sounds. But who cares! It was STUNNING, and we’ll be back for more.

Now to fill you in on the winery. It just happened to be a Jerez producer who specializes in “ancient sherries”, and thus with this little marriage of swine and sea, a glass of 30yr old Bodegas Tradicion Palo Cortado became the most amazing pairing. Acidity cutting through richness, and nuttiness melding with earth and sea.

Juan Badia Blauquer is the culinary genius we have to thank for this experience. A man whose smile not only lit up the room when he arrived at our table to inquire our take on his creations, but also someone who loves food like you want your chef to love food! Giddy with excitement, as he explained what we were eating. However, I have to admit that the meeting became a bit intense, and I failed to take pictures, or proper notes on the food. For this, I apologize.

Of what I remember of the first course, we were served bitter greens salad with a miniature fried fish called, llengueta; raviolis stuffed with blue cheese and covered with a seared fish fillet; and a tartar over a marscapone like Catalan cheese. And as we had chosen to share plates, whereby making each small portion worth savoring, the experience seriously brought tears to my eyes. 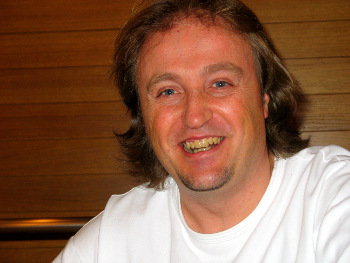 The second course consisted of small pieces of swordfish in a sauce that had me inappropriately licking the communal plate they came on, while the solomillo (tenderloin) went so well with the Oloroso 30 year that I found my mind drifting as I let the two mingle in my mouth. And finally, the goulash of pork cheeks were succulent and juicy with the lightest whiff of spicey paprika. I had fallen in love.

As for the desserts, if the waiter fully comprehends that you are drinking good wines and offers up cheese, rather than sweets, you know you are in a good place. We dipped our fingers into a small plate of 4 cheeses: 3 Catalan, 1 French, and a delightful 20yr PX to pair with them. This was followed by good coffee and black chocolate truffles.

Sated, I wanted to linger, and drift into a food coma, but another meeting had me bolting for the door before I had a chance to fully collect myself. I will go back, in fact, I’m trying to find an excuse to right now. The truth is, this is the perfect menu. While there are some daring, and fun combinations of flavors, there was still a respect for the food, rather than highlighting “just for showmanship” adornments like colored foams or complicated concoctions. This was great food, at a great price, in an easy location, with tables available.

As for the wines? Bodegas de la Tradicion specializes in expensive sherries. Why? Because nothing they produce is less then 20yrs old, and most are over 30. The Amontillado, Oloroso, Palo Cortado, and PX we tried, were all of incredible quailty and despite their 40+euro price tag, worth every cent. We hope to get Justin Roberts down there to give you a full profile soon. So stay tuned!

For now though it’s siesta time!