Lancers and Mateus – Representing a Nation of Wine 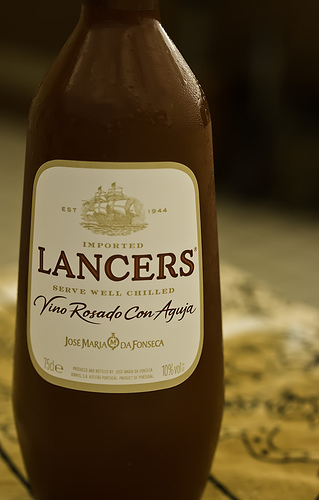 Portugal equals Port wine, right?! This statement is dead on for so many of you, but this wasn’t the case if we go back a few generations. In the 1940s, there were two brands that epitomized Portuguese wine to the global market: Mateus and Lancers. Both wines were presented in uniquely shaped bottles that appeared to be created for one purpose only, to hold candles, which consequently, made them unforgettable. Roses and slightly sweet, both labels helped shape a generation of wine drinkers, appreciated for their icon value than for their sophistication or “rating”.

Lancers
At the end of WWII, Americans wanted a beverage to toast in celebration without having to drink the bold European wines of the age. Inspired by Antonio Soares Porto’s creation of a light rose called Faisca, Henry Behar sailed to Portugal in 1944 to visit Maria da Fonseca. Suggesting that they market Faisca to the American public as both a versatile and refreshing wine that is spec, Fonseca stuck a deal with Behar’s distribution company and launched the emblematic rose wine, Lancers.

What is of particular interest to me is how the original name and shape of the bottle morphed into what we know it as now. As a result of the wine’s baptized name, “Faisca” being too close a bedmate to Fiasco, they canned it entirely for a fresh new name based on the title of Behar’s favorite Velasquez painting, “Las Lanzas”. The shape and material of the bottle, however, was based on a marketing ploy to offer Americans something easily distinguishable from other wine bottles of the time. The campaign was extremely successful causing sales to soar over 1 million bottles in th 1970’s, there was a slight problem. Ceramic breathes. And when ceramic breathes, it allows oxygen to exchange at a rate not optimal for a simple light rose.

So, being the forward thinkers they were, they changed the bottle to a frosted glass design, which later was revamped to a festive opaque glass allowing festive cranberry color of the wine to speak for itself. Interestingly, the frosted glass design is still quite popular in Central Europe as a result of Europeans associating the opaque bottle with liquor, rather than a Rosado.

Through Lancer’s market research, they’ve also found an interesting trend in their consumer demographics. Although we all know that women tend to be the driving force behind pink bottle of rose, they’ve found that their consumer base is half women and half men. Why? Simply because men, bless your hearts, acquiesce to us just like they do when we need good shoe fix. And, as a result of Lancer’s new sexy design, which I really like, the young twenty somethings are all over this bad boy, making it a fun festive party drink that they can dually enjoy with their grandparents at the holidays while reminiscing about B2 Bombers and Swing music.

We tried Lancer’s last night among a group of friends. Opening the ridiculously heavy frosted glass bottle, watching the wine splash into the shallow depths of the glass, I honestly assumed that I would find serious fault with this wine, but that was far from the truth. Putting the glass to my nose, noticing a faint cranberry aroma with a slight effervescence, the wine is simple, lightly sweet and flawless, perfect for a summer outing. Similar to white zinfindel, it’s a slightly fruity one-dimensional wine that can be found just about anywhere for about the same price you most likely have in pocket change, less than 5 bucks. 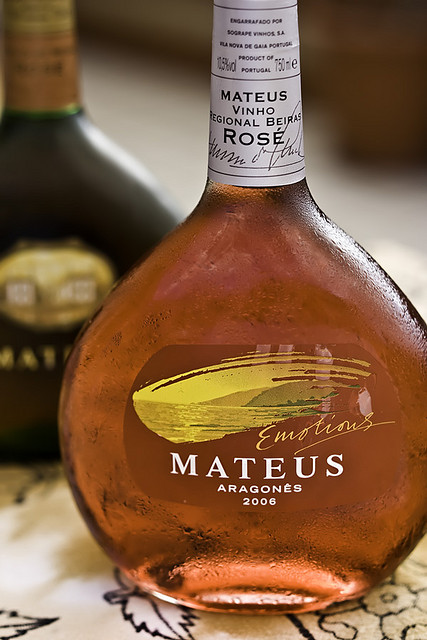 Before Henry Behar even stepped foot into Portugal, Fernando van Zeller Guedes, SOGRAPE’s founder, wanted to launch an attractive and interesting wine from Portugal that had international appeal. Not local appeal, but international. This is not an easy task when considering the lack of information Van Zeller Guedes had at his fingertips in 1942. Without computers, surveys or consumer demographics, he created a rose made from red varietals native to the Douro, such as Baga, Rufete, Tinta Barroca and Touriga Franca. The result was a light, young, fizzy, easy drinking wine showing flavors of watermelon and medicinal herbs, offering itself as the perfect alternative to beer, soda or champagne.

Clearly, Mateus hit the market flying, making itself a household name as fervent as Lucky Strike, but like Lancers, part of its market appeal was the result of its packaging. A squat, disproportional bottle, it had as much use as a doorstop as it did a wine bottle. Evidently, the bottle was inspired by the flasks used by soldiers in WWI, a shape that was not only familiar to so many Europeans and Americans, but also something that was completely different from any other bottle on the shelf. And if we consider the fact that no one buys Mateus to store in their cellar, but rather drink the moment they walk in their door, I can imagine the bottle being very effective, slightly awkward, but effective.

Like Lancers, Mateus has also changed its image in an effort to reach a younger hipper crowd. The Mateus Rose Argones (or Tempranillo here is Spain) 2006, is a neon lollipop red color that beams from the traditional squat opaque bottle. Showing the same radical red cherry aromas as the brilliant color in my glass, the big ass cherry flavor immediately takes me back to my grandmother’s jar of maraschino cherries she would place with perfect grace on both my Shirley Temple and her Manhattan. And in all honesty, it’s a decent wine. Would I run out and buy a case, no, but if served on a steaming hot day alongside the coast, I would happily accept a second glass. Unfortunately, it doesn’t appear to be available outside of Portugal yet; however, if we hear otherwise, we’ll let you know.

*If you have a story that involves either of these wines, please let us know about it. We would love to hear about how either Lancers or Mateus affected your life, for better or worse! 😉