Living Up to a Gran Reserva Label: Bodegas Faustino 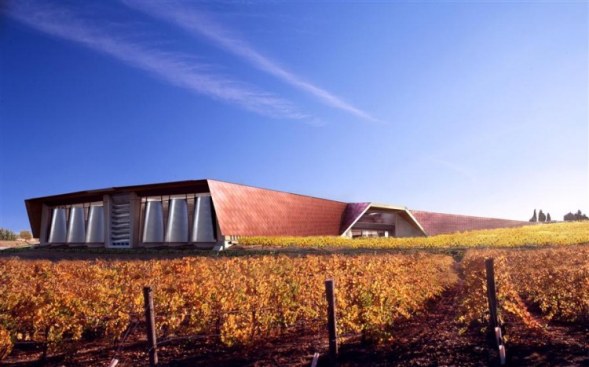 As far as I’m concerned, the job of big brands is to produce good, standard, classic wines of their type and place. Although I haven’t tasted their entire portfolio, and I am still doubtful about some wines, Bodegas Faustino seem to do this relatively well. I say ‘doubtful’ and ‘relatively’ because I’m not entirely sure whether one should call their ubiquitous Faustino V Rioja ‘classic’ despite or because of what I think is a decent whack of Brett. But, after all, Brett is named after the British and, as with quite a few good Bordeaux, twist my arm and I’ll say it’s meant to be there.

But lets move on. After a British press trip to visit the Faustino group’s new, multi-million euro winery that is Portia in Ribera del Duero (of which more in the next post), I, being the only tanned and unproblematic journalist (I had a car, the rest were flying back to the UK), was handed three wines by the affable (who, on a press trip, is not affable?) Antonio Ballaster, export director for Grupo Faustino. One was a baby (i.e. young) Portia, the other the aforementioned Faustino, and the last, opened three days ago, a bottle of their Campillo Rioja Gran Reserva 1995.

The exact price of this wine is tough to find, (I’ll try to hunt it out in a Spanish supermarket soon) but it seems the retail price is between €15 to €30+ per bottle. Now, all things being relative (which, I admit, is an argument that is pro just about anything), that is a damned decent price for a bottle that’s 15 years old. The key is whether the wine itself lives up to its Gran Reserva label. And I think it does, with just enough development and body and texture that you should get from Rioja that old. It’s not top-of-the-range stuff – there isn’t the fruit to last more than a few years and there isn’t enough complexity to call it great – but if you want to show people what aged Rioja is, this is the first rung on the ladder.

Colour does not look 15 years old – still nice and red with only tiny signs of browning/development. There is, though, good development on the nose (leathery, smoky, earthy, with a bit of dark fruit and cherries) and it would sit very well next to a Bordeaux Cru Bourgeois of a similar age. Very nice, elegant palate with good juicy fruit and a nice, fresh length. This is decent, old school, Rioja – not overly complex, but a good guide – which is what Faustino should be doing. Strange it doesn’t say Faustino anywhere on the label though…