Editor’s Note: Our resident contributor, Janelle Norman from Tapas Talk, has written a charming article on one of Spain’s most appreciated cured meats, Lomo. 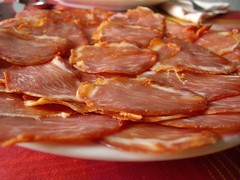 One my favorite “embutidos”, or cured meat, in Spain is Lomo Embuchado, or cured pork loin. Don’t tell anyone, but I like lomo almost more than cured Iberian ham, or jamon. If I have both sitting in front of me, the lomo disappears a bit faster. A few months ago, when I was with my boyfriend visiting his parents in northern Spain, they served lomo along with an aperitif before lunch. They announced that this “lomo” is from the Denominacion de Origin of Guijuelo, which is acclaimed around the world for its exceptional quality in Iberian ham. The lomo was exquisite, and as I enjoyed the complex flavors of this beautifully marbled Iberian meat, I somehow managed to have everyone laughing at me when I attempted to pronounce Guijuelo. It’s supposed to be “Gee-HWAY-low”, but I forgot how to say it correctly and said something like “Gwee-hell-ow”. You try it! I am constantly reminded of this slip and my good-natured Spanish family has now taken to pronouncing it my way. They have made such a joke of it that I sometimes forget which way is actually correct, but least I know what to look for at the market!

Guijuelo, known locally as the “Cradle of Iberian Ham,” is a town of around 10,000 people located in the southeast of the province of Salamanca, about 3 hours west of Madrid. It is the center of the Denminacion de Origen of Guijuelo and its producers are prize winners known for their excellent quality and the artesanal nature in which the hams are produced. At one thousand meters above sea level, the climate is optimal for the curing of hams during the cold winters and mild summers. Guijuelo’s most famous resident producer, Joselito, who has received nothing but the highest of worldwide critical acclaim, simply announces that their hams are “The Best Jamon in the World.” Give it a taste and you will most likely agree. Australians can now rejoice for it has been announced that Joselito hams have received approval for import. I have not been able to find any information about the current status of if any Guijuelo hams are available in the US. (might be a good time to make a trip to Spain!)

If you visit the town of Guijuelo, one of my Madrileno friends highly recommends eating at an award-winning Guijuelo restaurant, La Barbacoa de la Amistad. The logo, a friendly pig with the body of a prawn, claims that you will be served the best “seafood” from the pigsty.

Gabriella’s Note: Lomo is not only an integral part of Spain, but endemic to every single wine tasting you’ll ever attend on the peninsula. It’s so common, that to suggest a Spanish wine to pair with it is rather humorous, because their isn’t a Spanish winemaker on the planet who wouldn’t happily hand you a thin slice of lomo with their wine. However, if you can find this delectable treat in your nearest gourmet shop, delicatessen or Tapas Restaurant, may I suggest you pair it with a light Spanish red or a crisp, dry Fino.