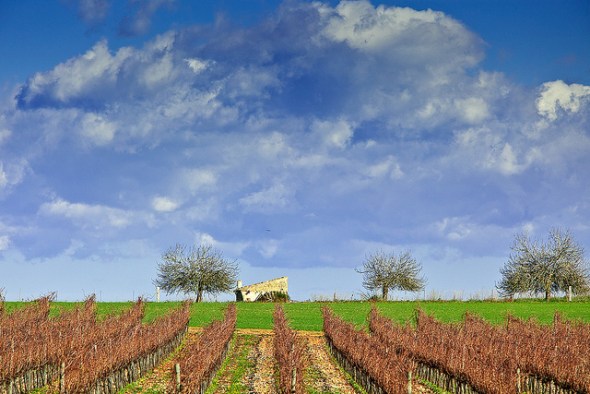 The allure of Mallorca lies in images of escaping the hectic mainland life and living an island dream (if only for just a few days) and walking carefree on the beach of the Mediterranean while the sand crumbles softly beneath your toes. But then you head to a local restaurant for the freshest seafood the island has to offer and see the wine list. Local wines? Do you dare venture off mainland Spain (or the rest of Europe for that matter) to try them? Absolutely!

The wines of Mallorca are undoubtedly some of the best wines you have likely never heard much less tasted. The opportunity is now.

Vine cultivation began in Mallorca as early as 121 B.C. In the first century B.C., Pliny even wrote about Balearic wines, comparing them with the best in Italy. Cultivation even continued during the years of Arab rule (even though forbidden) and excellent wines were offered to King Jaume I when he conquered the island in 13th century. The wines were of such quality the courts of both Aragon and Castile frequently ordered wine.

Vineyards quickly spread across the island between 1865 and 1890 in response to the need for wines in France as a result of the phylloxera plague in 1862. But shortly thereafter, in 1891, phylloxera destroyed Mallorca’s vines as well as the island’s livelihood. Instead of replanting vines farmers were encouraged to foray into agricultural products, in particular, almonds. A small number of vines were replanted but only enough for local consumption.

However, in the 1990’s a number of local winemakers decided it was time to invest in their businesses in an effort to improve the quality of their wines. This included planting more popular international varietals (Merlot, Cabernet Sauvignon, and Chardonnay) as well as nurturing the indigenous island varietals, using stainless steel tanks and equipment, enhancing irrigation systems, and increasing the use of oak barrels. Their work and efforts have most certainly paid off. Sparkling, white, rosé, and red wines are all now produced on Mallorca with a concentrated focus on quality.

Mallorca is home to two D.O.-designated wine regions as well as two regionally-designated areas. During my trip to Mallorca I chose to consume only wines produced on the island, and, as a result, was fortunate to try wines from all over. This island is producing some amazing wines at prices that would make one double-take as you walk through the local wine shop. The diversity of wines produced on Mallorca rival some of the best in the world and are an amazing bargain. 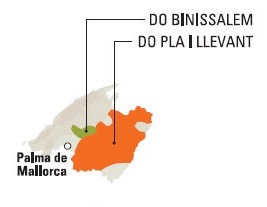 Binissalem (D.O.) – The first D.O. in Mallorca (1990), Binissalem is located in the heart of the island and is comprised of 13 wineries.  A unique microclimate is created by the Alfabia and Tramuntana mountain ranges. It is characterized by a hot, dry summer and a short winter. The vineyards are located at altitudes ranging from 250 to 650 feet (75 to 200 meters) and the area experiences approximately 18 inches (450 millimeters) of rain a year. The following red varietals are permitted in Binissalem: Manto Negro, Callet, Ull de Llebre (Tempranillo), Monastrell, Cabernet Sauvignon, Syrah, and Merlot. White varietals include Moll (Prensal Blanc), Parellada, Macabeo, Moscatel, and Chardonnay. Regulations require minimum usage of both Manto Negro and Moll and/or Moscatel (30% and 50%, respectively). Some notable bodegas in Binissalem include Bodegues Macià Batle, Bodegues, José Luis Ferrer, and Vinyes i Vins Ca Sa Padrina.

Pla i Llevant (D.O.) – Receiving D.O. status in 1999, this region also is home to 13 wineries. This is one of the most traditional wine-producing areas and covers almost half of the island. Covering the central and eastern parts of Mallorca, the area experiences cool winters and hot, dry summers. Rainfall here reaches about 17 inches (400 to 450 millimeters) annually. Growing similar varietals to Binissalem, this region has a number of authorized grapes. They include red grapes Manto Negro, Callet, Fogoneu, Ull de Llebre, Monastrell, Cabernet Sauvignon, Merlot, Syrah, and Pinot Noir. Permitted white varietals include Moll/Prensal Blanc, Parellada, Macabeo, Moscatel, Chardonnay, and Riesling. Bodegues Jaume Mesquida and Vinyes i Bodegues Miquel Oliver are amongst some of the more noteworthy wineries in the area. 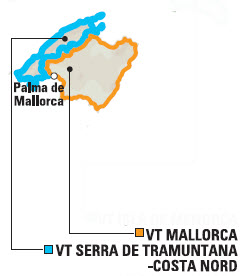 Serra de Tramuntana-Costa Nord (Regional Wine) – Designated in 2002, this regional wine zone comprises 18 municipalities in northwest Mallorca. The area is traditionally known for producing wines from Malvasia (dating as far back as the 15th century) and, as with the other Mallorcan wine regions, Serra de Tramuntana-Costa Nord is home to red wines made from Cabernet Sauvignon, Merlot, Syrah, Monastrell, Ull de Llebre, Callet, Manto Negro, and white wines made from Malvasía, Moscatel, Moll, Parellada, Macabeo, Chardonnay, and Sauvignon Blanc. Currently home to four wineries, this region is slowing growing as the area moves from almond production to vine cultivation.

No trip to Mallorca would be complete without a trip on the Mallorca Wine Express. This is not your ordinary wine tour, and one that is well worth the time. This is a unique, informative, and thoroughly entertaining way to enjoy and learn about the wines of Mallorca. It was absolutely one of the highlights of my trip to Mallorca. The Express is a “train” (actually, a tractor disguised as a train) which runs along the Es Raiguer area. Starting and ending at the Macìa Batle winery in Santa Maria the tour visits wineries and vineyards along the way; and getting there is quick and easy as well. 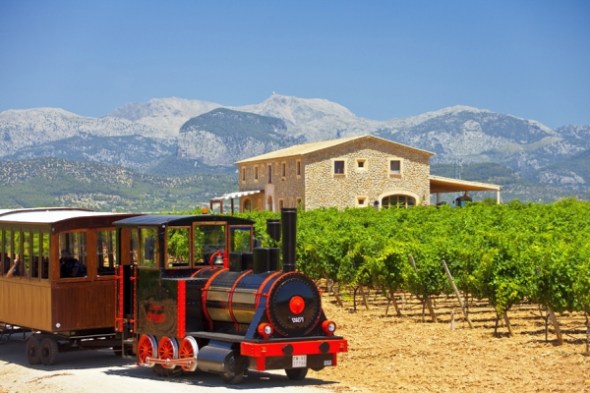 Four different tours are available to suit any taste. The Day Tour visits two wineries where you will tour the facilities and taste roughly seven to eight wines along with paired appetizers. The Gourmet Tour adds some of the best of Mallorquin food to the tour (including Jabugo jamón, cheeses, sobrasada, and coca de trampo). The Sunset Tour takes place after lunch and includes a winery stop with three wines as well as a stop where you will enjoy another four wines, a Mallorquin snack, and an impressive sunset over the Tramuntana Mountains. Finally, the Express is also available for Private Charter Tours. You can design your own tour for virtually any occasion. All tours are available in Spanish, English, and German. Additionally, there are a number of restaurants near the starting/ending point where you can enjoy excellent Mallorquin cuisine along with local wines.

A visit to the island of Mallorca is truly an incredible experience.  The scenery, food, and wine all make this a great escape from daily life. But if you are unable to make the trip across the Med, seeking out the wines of Mallorca is worth the effort. Regardless, the time is now to experience one of Spain’s last undiscovered wine frontiers.