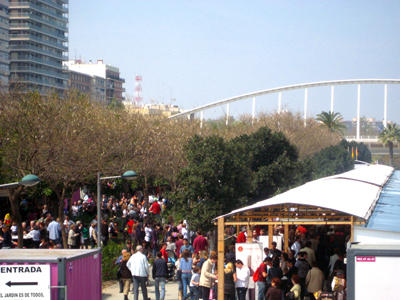 Wine events and young children aren’t a natural mix most of the time, but there are exceptions.Â  The recent XXI Mostra de vins, caves i licors i XVIII d’aliments tradicionals de la Comunitat Valenciana certainly was.Â  (Nice short title for it, don’t you think?)Â  This hefty name in the Valencian dialect of Catalan simply means: The twenty-first sampling of wines, sparkling wines and liqueurs, and the eighteenth sampling of traditional foods of the greater Community of Valencia.Â  The good thing is that the drinks and food being sampled were easier to swallow than the event’s name.

The setting for this event was the area commonly referred to here as el río – the river.Â  For those of you who haven’t visited Valencia, it will be hard to imagine just how fantastic the dry riverbed of the Turia is.Â  After a severe flood in the late 1950s, the river that had surrounded the city for centuries was diverted, leaving a vast tract of land exposed where once the waters had flowed.Â  Although I’m sure that there were some people who grieved for the loss of the river, the gigantic park that has replaced it truly is a wonder.

Katie, Oscar and I have spent hours wandering through the meandering riverbed. Â it’s wide enough to house two football pitches with ample room for pedestrian and cyclist traffic between them, though the majority of its 7km are not dedicated to sports fields.Â  There are children’s parks, fountains, sculptures and beautifully landscaped gardens.Â  And from the 2nd to 5th of April, there were also hundreds of local producers of wine and food offering their wares for a token fee.Â  Who could ask for more?

While Oscar, age three, made friends and played with the selection of toys we had brought from home, Katie and I selected the stalls that most appealed to us.Â  For 10 Euros we were each provided with a small dish, a wine glass, and five tickets each for food and wine.Â  With so many wineries from the region present, it was difficult to decide what to try.Â  In the end, we went back again and again for a total of three visits to the four-day event.Â  On the fourth day we just couldn’t do it, even though there were still dozens if not hundreds of wines that we hadn’t yet sampled.Â  Too much of a good thing…

The food offering wasn’t quite as interesting as the wine; most options revolved around typical Valencian deli meats which were enjoyable but not varied enough to inspire real enthusiasm.Â  There were some good cheeses on offer as well and a bakery with both sweet and savoury options and – Oscar’s favourite – a chocolatería. Â Â Some stalls were dedicated to olive oil as well, but our focus remained the wine.Â  (I couldn’t even part with a ticket in exchange for some anis from Alicante, which I was curious about.)

I couldn’t possibly describe all of the wines that we tried here, but I will say that we did end up spending a lot of time in front of the Bodegas Los Frailes stand.Â  We even managed to sample their Moma wine (50% Monastrell and 50% Marselan), which wasn’t available to try, only to purchase.Â Â  (Thanks Miguel!) 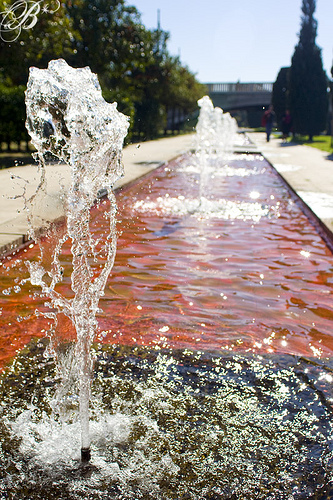 We’ve been to a number of public wine events but were quite impressed with this one.Â  Despite the rain on the first evening (there were coverings, but things got crowded) everyone seemed in good spirits.Â  That makes sense given the consumption of vino, but the restraint that almost everyone displayed was refreshing to see compared with similar occasions in Canada, for example.Â  Sure, there were a lot of tipsy people, but it all seemed quite civilized and controlled, which was great. (Flickr Photo by Anne Mead)

We also preferred the structure of this event to that of a similar festival in Barcelona last summer.Â  The Catalonian wine event was quite similar (stalls where you could trade tickets for wine and food) but there, the number of tickets for a sampling of wine varied from one to four.Â  Here in Valencia we only saw one stall that asked for two tickets for their high-end red and a friend of ours managed to get his for just one ticket regardless.Â  An open environment like that makes it easier for people to try the wines without prejudice, at least in my opinion.

In a wine region that is working hard to reinvent itself, this kind of event seems the perfect way to inspire locals and visitors alike to investigate the area’s vinicultural offering.Â  Since coming to Valencia I have been learning more and more about the hidden gems that its wineries offer.Â  I don’t think that they will remain hidden for long.