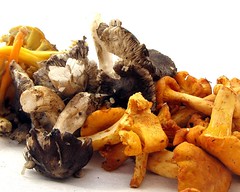 Editors note: As always, we at Catavino love new contributers to our humble Iberian wine blog. The more unique the perspective, the better. It offers you, and us, the opportunity to hear about Spanish and Portuguese wine from someone other than ourselves. And as many of you are intimately aware, if you don’t take in other’s opinions, you tend to only hear only the echo of your voice. So without further adieu, allow me to introduce Joshua Weitzer. Josh is one of the few people on the planet I can honestly say is “damn interesting”. As an American, he not only soaked up Catalan in just a few years (and trust me, very few can do this successfully), but he also knows of every hidden International food shop, dive bar and fabulous tapas joint in Barcelona. We’re very happy to have him with us, and hopefully this won’t be the last!

Making it out to Gabriella and Ryan’s Terrassa terrace was a moist adventure as the familiar rains of autumn begin to fall in the Catalan countryside. Of course, it’s easy to forget you are in the middle of fall in Barcelona, as we have been blessed with a seemingly perfect weather as of late. If you’re not paying attention, entire storms can hide behind Tibidabo, a mountain separating Terrassa and Barcelona, waiting to sink their little wet drops onto you.

After a little detour to La Boqueria open-air market for some fresh mushrooms, I stepped on the train and headed east with visions of cooking up mushroom soup and sampling Portuguese wines. As the train pushed through the tunnel under Tibidabo the rain was just beginning, but by the time we came out of the tunnel into a heavy downpour, the train was awash with surprise. And while the train may have needed a bit of a shower, I did not. I had no interest in getting wet when exiting the train, so instead of fixating on the inevitable, I let my mind wander to the bag of fresh mushrooms I had just picked up.

The fall offers Cataluña the best selection of wild mushrooms. We are just now seeing the Rovellons and Rossinyols (Chantrelles) among other local varieties, which appeared right after the first drops of rain sunk deep into the forest floor of the Pyrenees Mountains and the surrounding hills. Catalans really enjoy their mushrooms, and as a result, the selection can be bountiful. This year has not been the best, however, as the rains have just started. A friend and avid mushroom collector told me this week that there was a mushroom festival and contest last week in Berga. The winner from last year collected more mushrooms than the entire harvest from this year’s festival. This is a good thing though, as we will have to make another mushroom soup with Ryan and Gabriella to compare the different offerings soon to be available!

As Ryan and I sloshed our way through Terrassa, we picked up a few more choice ingredients on the way to his house. I was looking forward to tasting fine wines and finding a dry spot. Upon walking through the door, we almost immediately commenced cooking up the soup, chatting about how flavors are crafted in wines and the relationship between tannins and the amount of time that the mosto is allowed to sit unfiltered. I began to realize that there are so many means to deliver different results in flavor and character. Suffice it to say, I have so much to learn, but it’s always fun with when you are surrounded by shiny bottles of some of the tastiest wines being produced in Spain and Portugal. 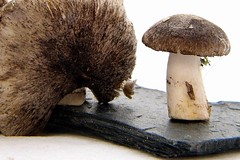 We started talking about how the color of wine can tell us about the flavors we are perceiving. While Ryan was rattling away at the stovetop in the kitchen, I followed Gabriella into the office where I sat down to carefully look at the colors between the 2005 Quinta de Ventozelo Douro Cister da Ribeira, 2004 Quinta de Ventozelo Touriga Nacional and the 2004 Quinta de Ventozelo Douro Tinto. As it was still raining outside, we were able to focus our attention more closely on the wines, less distracted from habitually stunning sunsets on their terrace. While the flavors of the soup began to concentrate, I had a look at how the faint differences in red and violet colors of wines are cast into our eyes, sparking our imagination and piquing curiosity as to what the wine from these ruby rays will taste like. While discussing the types of flavors perceived when tasting, we sampled each of the wines and compared their flavors. Each one was a pleasure to drink, but I definitely appreciated the flavorful and subtle finish of the Douro Tinto the most.

Dinner was a rousing success of food and fun. The mushroom soup was elegantly soft and rich, definitely worthy of a repeat affair. The mix of Portuguese wines and mushrooms will always be a hit because the quality of the ingredients is just so good! I will definitely be making more of this stuff as the fall begins to wrap its wet paws around us as we slip towards winter. Fortunately for me, the rain had subsided and I was able to make my way to train station in Terrassa, happy and dry. As the train eased back to Barcelona, I was already thinking about how to convince Gabriella and Ryan to come into the city and do a Spanish Chorizo tasting with me soon.

PS: He doesn’t need to convince us, we’re up for any Spanish wine and a few slices of chorizo!