My name is Brandy and I come from Jerez 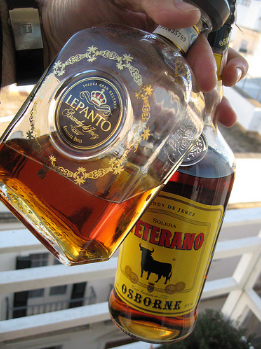 Things have been pretty chilly here in Jerez, with record low temperatures in recent days. There has been snow all over Spain, even in places that don’t often get it. One way I like to fight the cold is with a little nip of something strong. I used to be quite fond of a shot or two of single-malt Scotch Whisky.

I’m not sure about the rest of the world, but in the UK Spanish brandy usually equates in peoples’ minds with cheap and probably fairly nasty. Something not to be drunk without a mixer; an barely palatable alcohol-delivery mechanism. I have to admit, that is what I used to think, however, since moving to Jerez nearly 4 years ago I have met and got to know a family of very interesting Spanish brandies.

Brandies de Jerez, like the wines and vinegars from this area, are carefully crafted, fantastic spirits but somehow manage to hide their light under a bushel. They really should be a lot more famous. These are not just Spanish brandies, they are in a different league.Ã‚Â  The Jerez brandies are aged in a solera system and I don’t know of any other brandy aged in this way. Solera usually = quality, so I’m fairly certain the best Jerez brandies could give top examples from around the world a good run for their money. The solera system also produces every-day Jerez brandies which are pretty damned good!

Amusingly, both my current and former cold-weather tipples of choice are related; second cousins probably. Old sherry butts are used to age Brandy de Jerez and most whiskies have a sherry butt or two in their genealogy. Some of the bodegas around here go as far as making brandies aged only in ex-Amontillado, Oloroso or PX butts. All things brandy in Jerez are controlled by the Consejo Regulador de Brandy de Jerez. They even have a blog! Although sadly it has not seen any action since November 2006 – which might explain the light under a bushel situation I mentioned above.

Like the sherries and vinegars, the Brandies de Jerez have an age classification system: Solera, Reserva and Gran Reserva, with an average of one, three and ten years in wood respectively. If you’re going to be sitting by the fire, sipping from a brandy-balloon and contemplating age classification systems for alcoholic drinks then you must go for a Grand Reserva. I guarantee you will get more bang for your buck compared to an expensive brandy from regions of France beginning with say an A or even a C! If cocktails are more your thing then I guess Solera, or Reserva for a bit more flavour, are the way to go.

How do I enjoy a Brandy de Jerez? Well, to get the blood flowing first thing on a frosty winter’s morning: A shot of Brandy de Jerez in my “Café Solo” – it’s called a “Carajillo” and is as Spanish as bullfighting. The contemplation-of-the-universe method of consumption is my usual one, mainly because my mixology skills are so pedestrian, you know, brandy and orange or brandy and coke. I guess I should take one of Angus Winchester’s courses and mix it up a bit!

Anyway, the bottles in the photo are a Gonzalez-Byass Lepanto (Gran Reserva) and an Osborne Veterano (Solera). As you can see the Lepanto worked hard over Christmas. Another favourite brandy is the Fernando de Castilla “Único”, worth buying if you can find it. You might be interested to know: The bull on the Veterano bottle is an trade mark designed by Manolo Prieto in 1956. It started off right where it is in the picture – on bottles of Veterano – but subsequently became a symbol for Spain!

By the way, for those of you in the big apple looking to try a Brandy de Jerez, Snooth recommend: The Brandy Library