Editor’s Note: We have a new and very exciting correspondent writer to the Catavino crew, Oliver Styles! Oliver will be providing us his palate as he tastes through various Spanish and Portuguese wines from his current home in Zamora, Spain. Here, Oliver has provided us a bit of his long and adventurous history with Spanish wine, and hope you will give him a warm and very hearty welcome.

It’s galling to think of it now, but within two months of joining UK wine magazine Decanter in 2003, I came within tasting distance of a Vega-Sicilia vertical going back to 1942. Although I was sent to a private Louis Roederer tasting instead, the tales of the ’42 were frustrating, even then, when I had little knowledge of Spanish wines.

Throughout the next six years at Decanter, most of my efforts were dedicated to news – any mention of Spain generally consisted of reporting events in Rioja or the new Freixenet advert.

Which was hardly fair, considering its scope. Indeed, it probably wasn’t until I mistook a Rioja Gran Reserva for a decent Bordeaux at a blind wine tasting that I began to really interest myself in Spanish wines.

These included Sherry – that dying breed. I visited Jerez on a press trip organised by Harveys several years ago. It was a wonderful experience and my resulting blog praised the company’s serious Finos and Olorosos but slammed Harvey’s Bristol Cream (which is to Sherry what Pringles are to potato crisps). Needless to say, the blog did not go down well with Harveys or their PR company. But it merely reinforced the issues that pitch ‘individual’ wines against ‘commercial’ ones.

After six years at a wine magazine you can acquire a lot. But I was still learning the craft. Indeed, wines like those from Toro and Jumilla were appalling to me and my more restrained palate. But by the time I was visiting Spain proper, it became obvious these wines were brilliant with the regional food.

And then I decided to move to Spain. The decision wasn’t overly tough – I’d thought about making wine and setting out alone ever since meeting and interviewing Didier Dagueneau in 2007. Then, two years later, I got the opportunity to do so.
London to Villanueva de Campeán is quite a change.

Firstly, I now have access to pretty much every single bottle of Spanish wine I could wish for (and the multitude of styles is quite astounding – from the dry, acidic white Txacoli of the north, to the gloopy, sugar-thick PX sweet wines of the south).

Secondly I now get to try ‘real’ wines, namely the stuff the locals make for themselves. You wouldn’t necessarily think of co-fermenting Tempranillo with Malvasia but it produces something like a sweeter, fruitier, less-alcohol, less-tannic Toro.

Then there’s Villanueva itself. If the village ever had need to produce a brochure, it would probably run like this:

“Hidden from the Zamora – Salamanca motorway by a long ridge that runs north-south, the sleepy village of Villanueva de Campeán (pop. 200 – on a good day) looks out towards the oak forests of Sayago that lead up to the Portuguese border. Although surrounded by ungrafted vineyards, the village’s only tourism comes by means of its position on the camino to Santiago.

Villanueva sits in the Tierra del Vino de Zamora appellation and while there is only one bar and two pilgrim hostels, there are no less than three wineries.

I worked the 2009 vintage at the new winery in town: Bodegas Triton, making Mencia, Tempranillo and the autochthonous Prieto Picudo grape (which has the potential to be greater than the ubiquitous Tempranillo).

In my spare time (which basically means weekends before the red harvest kicks off), I make my own white Verdejo – a wine that will hopefully make it onto the shelves in the next few years (if I can ever master reductive handling and natural ferments on a tiny scale).

Then, I aim to become the first renowned producer of linear Verdejo. That’s if I don’t master a ‘rancio’ Malvasia first! 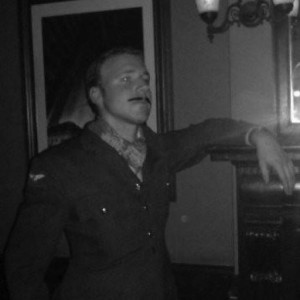