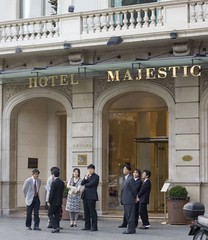 Last year, I was a guide for Butterfield and Robinson taking Americans and Canadians on bicycle trips throughout Catalunya. What just so happened to be my last trip for Butterfield ended in a side contract with a family to help them organize their living arrangements in Spain throughout the summer of 2007. However, what started as me organizing a three months adventure for the family was pared down to a two week summer camp for the kids after a 10 day Mediterranean cruise. Although their final product was 180 degrees different from the original proposal, they were content and happy with the arrangements, wanting to celebrate with us in Barcelona

before their bon voyage with an extravagant dinner.

June 4, 2007: Please pick the best place to eat that you would like to visit. In addition to paying you for your time, we really want to treat you and your husband.

What to do!? How often do you get an invitation like this? There was no denying that the minute we received this email, our eyes became saucers and our imagination madly started inventing possibilities. Barcelona has more bars and restaurants than it does streets, so it took no effort for us to come up with potential options. Do we go ethnic or traditional? Quaint or sprawling? Seafood or Catalan? Yet in the end, we decided that the choice was clear. We wanted to experience a 1 star Michelin restaurant. In the heart of Barcelona, the Hotel Majestic contains an elegant and cozy restaurant tucked in the corner of the second floor called, Drolma, famous for its internationally renowned Catalan chef, Fermí Puig.

Was it good? Oh yeah, it was absolutely fantastic. We were served twelve courses of some of the most amazing food and wine Ryan and I have ever tasted. Here is the quick run through of what we had the privilege of experiencing: 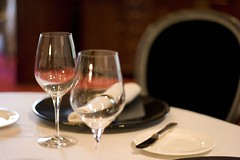 As for the wines, well our hosts/guest had just arrived from the US and were a bit jetlagged, and therefore, didn’t want to experiment with the wine list as much as we did. Sad really, but we made up for it, and did enjoy three very nice wines. We began with a 2002 vintage Cava from the bodega, LLoprat. Bready and critic at the same time. The small bubbles and creamy nose gave way to a racy palate that while mature and round showed a laser like acidity that kept the palate fresh and alive.

During our second course, we opened a white wine from the Priorat estate of Clos Mogador. Probably one of the most important and most influential wineries in all of Spain, this was my first time tasting their wine Nelin. Made up mainly of Granacha blanca, a grape I love to introduce to people who are unfamiliar with Spanish wine. Rich and unctuous, this wine is filled with flavors of flowers, fleshy fruits, and stony minerality. While the morel soup was a heavy and very rich dish that most likely could have benefited from a red wine, the body stood on its own quite well, offering a great addition to the meal.

Finally, and I hate to say finally so soon, but the last wine we had was an attempt to convert a white wine drinker to red. Tanajara, is a red wine from the Canary Islands, 100% Vijariego Negro. What is Vijariego Negro? I don’t know, but I can tell you this the wine was divine. Rich in the mouth with obvious oak influence, the fruit held its ground nonetheless, showing ripe red berry flavors framed by a mineral background. They say with Canary Island wines you can taste the volcanic soil and now I understand why. It’s not that wet earth quality you commonly taste in so many deep red wines, but rather a more primal nose, like spices from a terrestrial moon. Really a fun drink and worth the effort to seek out!

As we write this article together, we are still still thinking about this dinner three days later. We are still tasting the crispy delicious bits of foie-gras among the creamy and smoky flavors of the morel sauce. I remember the sumptuous and sweet flavors of the duck, the soft and tender texture of the scallops and the unbelievable flavor of the rum infused cake.

The only downside is that Ryan and I were so focused on our kind hosts that we couldn’t give the dinner the attention we so wanted to. As many of you know, if you go to dinner with people who like, but are not in love, with food and wine, very little of the dinner will be focused on how your knees buckle and your heart drops when your palate encounters and rare and beautiful sensation. But such is life. We had a wonderful time and are looking forward to our next mouthwatering experience!

Sidenote: We have purchased today the young version of the Basque cheese we had during dinner. We will be posting an article within the week regarding our findings!