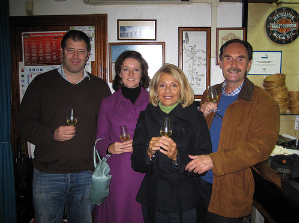 If you find yourself feeling a little peckish in El Puerto de Santa Maria, then I suggest you take yourself off to a little bar called, El Brillante. It’s on Calle Doctor Muoz Seca (aka Calle Cielo), just off the Plaza de España.

This little place pays homage to several things – most importantly good food and good drink. Weirdly, Francisco Franco also gets a look-in: In a corner of the bar youll find a little shrine to the man himself, and his sidekick Jose Antonio. Don’t get the wrong idea though, this altar was a little joke which got slightly out of hand, when friends and even strangers dug out, dusted off and delivered their contributions. The Franco thing does seem a paradox when you meet Antonio and Regli Mena, the kind, generous and even shy owners (they did not want to be photographed). Spain is full of anomalies like this, but when you settle in for a drink and a tapa and look around it all makes sense.

The story goes that 1909 Antonio’s grandfather found a diamond in the street; he sold it and with the proceeds started the bar, hence “El Brilliante”. For just shy of 90 years and through three generations this little bar has been in business, a bit of an institution. Much of the bar’s history, that of the Mena family, El Puerto and Spain is archived on its walls in cartoons, photos, mementos and that little collection already mentioned. You’ll see in the record that Antonio has made the pilgrimage to Santiago de Compostella on a horse and also likes to ride his motorbike to Harley gatherings all over Europe. Regli does Harley-lite and follows by air, riding pillion for the fun bits. 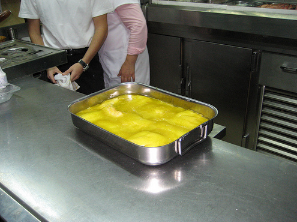 Regli is in charge of the food and her signature dish is “Atun en Manteca”. A large hunk of increasingly rare Bluefin Tuna, hand-caught in the Almadraba (the most sustainable way), and cooked slowly, swimming in well seasoned pork-fat, gently flavoured with garlic and thyme. It is one of the most delicious things I have ever tasted. The Atun is only available in the spring (these pics are from the autumn), when the fish are running through the Straits. If tuna is not on the menu, then you must try the Bacalao. The Portuguese are masters at this dish, but I think Regli might be able to teach them a thing or two. It’s so unctuous, it’s impossible to stop at one helping.

To wash all this down there should be no question: Antonio’s own delicious Fino sherry. He has something like 15 butts at home of which about 8 are of Fino. He brings fresh bottles to the bar every day and it is the perfect match for the food.