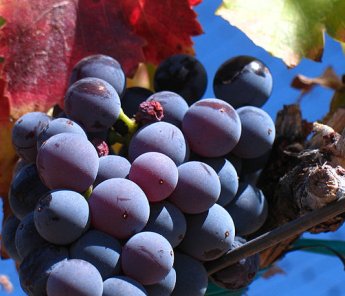 When we published our Rioja report on Monday, we failed to include one key element – grapes! You know those small, round, juicy little fruits that you loved to pop in your mouth as a kid, one by one, or could even be used as killer ammunition against your annoying siblings? Uh-huh, don’t sit there and pretend that you never put a grape in your mouth and spat it at your brother or sister sitting “innocently” across the room. We’re on to you!

Well, considering that the main Rioja varieties are key players in the region’s international fame, we thought it was high time to give you a brief synopsis as to which varieties are most common, and what unique traits they posses to craft a Rioja wine. The main four grape varieties for reds are Mazuelo, Graciano, Garnacha and Tempranillo, and for whites, Viura Garnacha Blanca and Malvasia.

Although a commonly found variety in red blends, it is also the first grape to be excluded from the blend. During our travels, several winemakers voiced their dislike because of this grape’s high susceptibility to powdery mildew and producing wines of racy acidity and little in the way of aroma. However, at its best, this wine can add a considerable amount of depth and vibrancy to a wine. Known for budding early and ripening late, this grape is ideally suited for the warm climates of Rioja. It is also the third most planted varietal in Spain, behind both Airen and Tempranillo, occupying approximately 1,184 hectares, or 3.5%, in DO Rioja.

Let me introduce our sensitive new-age grape, tending to produce very low yields with low PH. This is far from an easy grape to grow, but, if all planets are aligned, Graciano can produce some gorgeous and deep red wines with glints of vibrant purple and spicy, fresh aromas. It’s super power is not only its sexy appearance, but its ability help wines age gracefully with great structure. And as a result of its fame as a beautiful blending grape, it was christened the name Graciano, derived from “Gracias”, meaning “thank you”. 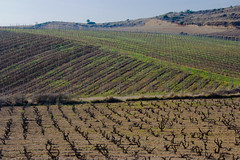 Many of you may be familiar with Garnacha (or Grenache) as a Southern Rhone varietal in regions such as Chateauneuf-du-Pape; although its origins are said to have originated in northern Spain. Also known as Garnatxa in Catalan (remember from our Patxaran article that ‘x’ in Catalan is pronounced like a ‘ch’), Garnacha is one of the most widely planted red wine varieties worldwide. In Rioja, you’ll find this grape most commonly planted on the warm eastern Rioja Baja region, where this grape thrives on the long warm growing seasons. I’ve tended to describe Garnacha as grape that produces lighter colored Rioja wines with big red berry flavors, a touch of spice and relatively low in tannin. However, head just south of us to the Priorat, and you’ll have a completely different experience of the grape. Here, the variety tends to be more concentrated and blended with young Merlot, Cabernet or Syrah grapes. But let’s not forget the infamous Garnacha clone called, “Hairy Garnacha” (insert thriller music here), differing from its mate by the fine downy hair growing on its leaves and producing smaller berries with slightly thicker skin.

As I trust you all well aware by this point, Tempranillo is known as “The Spanish Grape”. This is a thick-skinned grape, renowned for making rich and vibrant colored wines with long-aging potential, and typically, not extraordinarily high in alcohol. Earning its name from its relatively short growing cycle (Tempranillo = early), this grape tends to produce wines that are low in acidity, but big in their earthy aromas of tobacco leaves, spice, leather and dark berry aromas. It’s known by Rioja winemakers as the power house grape, capable of aging with grace and elegance, while expressing a wide range of complex aromas and flavors. Mind you that the lower acidity can be a very positive trait when associated with low-altitude growth, as it most often is blended with higher acid grapes, such as Graciano.

Iberian Synonyms include: There are way too many to list, but if you would like more information on this variety, simply check out our full article on Tempranillo. 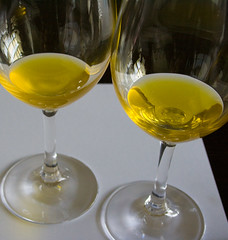 Albeit estranged from its native home in both Greece and the island of Madeira, it has migrated over the years to find itself planted throughout the Mediterranean, and now extending itself throughout the world. Generally, this grape is known for producing round, lush, expressive wines of deep, concentrated color and high in both alcohol and residual sugar. Lighter versions commonly show a clean, crisp finish, while those aged in barrel may express lighter tannins and a touch of vanilla. Dessert wines made from Malvasia are more opulent and tend linger on the palate.

Iberian Synonyms include: Malmsey in Madeira.

This is by far one of my favorite grapes in the world. Why? Because one of its many pseudonyms is Macabeo, known for producing slightly acidic wines with a delicate white flower, mineral and raw almond bouquet. Typically high in production, this grape tends to bud late, which protects it from frost damage. You may have remember our coverage of this grape when we covered Spanish cava, as it is traditionally blended with Parellada and Xarel-lo.

Although not as commonly found in Rioja, this unique varietal that swept Ryan off his feet years ago with its fat, lush mouthfeel and dense aromas of honey, cream and melon. I included it solely because of Ryan’s passion. Hence, if you want to read our full article on Garnacha Blanca for more information, please do so.

So there you have it! You are now all experts in main varietals of Rioja. Well done! But now for the bonus points. What are the recently accepted, yet highly controversial, varieties by the DOCa Rioja?