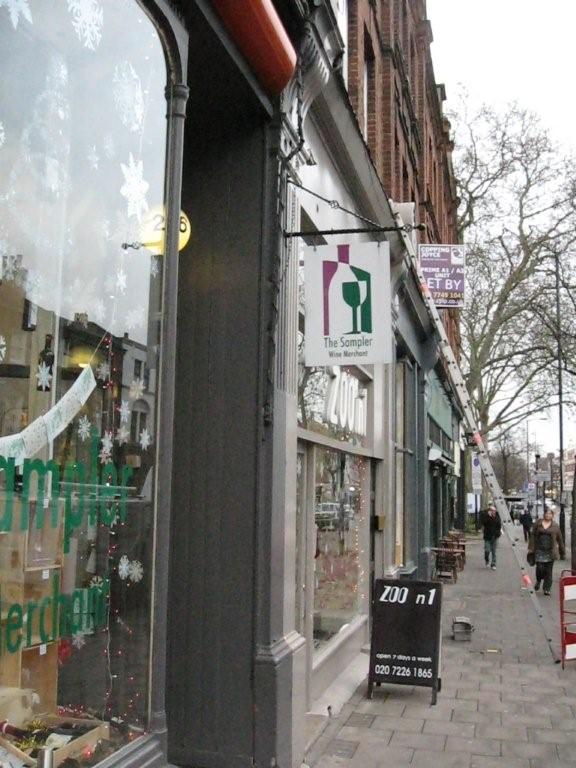 There’s a new-ish (born November 2006) kid on the London independent wine merchant block. A couple of weeks before Christmas, I went to check it all out. The unique thing about The Sampler is their array of 10 Enomatic machines, each holding eight bottles – so 80 wines available to try. The machines work with a smart card, which is debited each time you take a measure. I think the idea is fantastic on so many levels: Try before you buy, try expensive wines for a few quid, learn more about wine, tasting experience for WSET Diploma students (like me), etc…

If you are into Sherry, then The Sampler has a carefully chosen selection. I was quite surprised and impressed. They had some of the “La Bota de” wines from Equipo Navazos, which must be pretty rare in London, and also a two legends: The Amontillado “Coliseo” and the Moscatel Viejisimo “Toneles” from Valdespino, both at prices drifing into three figures, which is the same here in Spain.

In one of the Enomatic machines they hadÂ Vin Jaune to try, a wine I like to bring up whenever I am toldÂ DO Jerez is the only place in the world where wine is aged under flor. The label on the Vin Jaune was badly faded and damaged, but it was still possible to make out the vintage, 1985, the post code and something which looked like Bau… so I think it might have been by Baud Pere et Fils. A very interesting wine to taste. The reason I called in at The Sampler just before Christmas – and the best thing of all – is because their “Icons” machine was loaded up with some rare festive treats. The 1934 Margaux is what caught my eye when I had a look over their website before catching the plane to London. I have not had many chances to try very old wines – least of all a Margaux – so I was looking forward to giving this one a go and I was not disappointed. It tasted surprisingly “alive”, although I guess it had probably seen its better days. Even so,Â the younger Petrus next to it was relatively disappointing in comparison. Sadly I could not afford to burn an even larger hole in my pocket so I did not taste the 1999 Screaming Eagle.

Owned by Jamie Hutchinson and Dawn Mannis, there is nothing stuffy about The Sampler, it has a genuinely friendly and welcoming feel. Jamie was on duty the day I visited, and was more than happy for a bit of chat (and some WSET Diploma advice), even though the shop was quite busy.

For a Tuesday morning, when most wine shops are like libraries, I was surprised at the buzz. OK, it was the run-up to Christmas, but I was still surprised. People coming and going and at times we were teetering on the edge of a drinks-party atmosphere. However, for all the light-heartedness they also do serious wine – at one point, while some guys were huddled around one of the Enomatics, discussing wines to take over to the local chippie for their BYO fish and chip lunch, in a corner at the back a deal was being closed on 50-year-old bottle of Bordeaux.

All I know is, I will be going back for more next time I’m in London